Nov 10, 2017 6:46 PM PHT
Rappler.com
Facebook Twitter Copy URL
Copied
Of the 4 Philippine presidents since the administration of Joseph Estrada, President Rodrigo Duterte has the highest trust and performance ratings, according to Pulse Asia 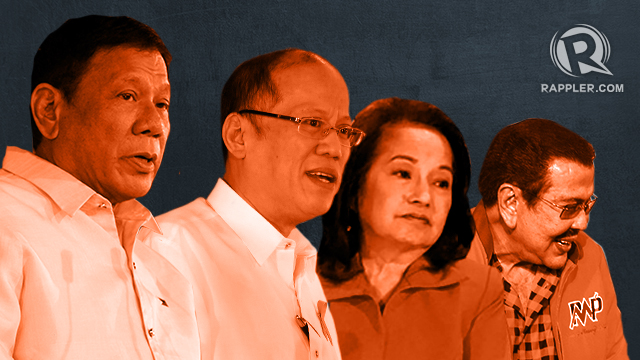 MANILA, Philippines – President Rodrigo Duterte, so far, enjoys higher trust ratings than the 3 Philippine presidents before him, according to a survey released by Pulse Asia on Friday, November 10.

The comparison spans the May 1999 surveys on Estrada’s trust and performance ratings, until the September 2017 surveys on Duterte’s ratings.

For trust ratings nationwide, only Duterte was able to breach the 90%-mark, getting a 91% trust rating in July last year or right after assuming the presidency.

Duterte’s lowest trust rating so far was 76% in March this year.

Aquino comes in second place in terms of most trusted president among the 4. But his highest rating of 80%, obtained in October 2010, is still 11 percentage points lower than Duterte’s highest mark.

But both performed much better than Arroyo, whose highest trust rating was 55% (October 2001), and Estrada who scored highest in October 2000 with 44%.

Duterte’s trust rating has never gone below 80%. Compare this to Arroyo, whose trust rating plunged to 10% in February 2010.

The same pattern could be seen in the performance ratings of the 4 chief executives.

As is normal in Philippine politics, the high approval ratings were recorded in the very first Pulse Asia surveys of the 4 administrations. Afterwards, all presidents suffered declines.

Both Duterte and Aquino had the smallest number of Filipinos who disapproved of their performance, initially staying within the single-digit threshold. But disapproval with Aquino grew in the last 3 years of his administratiom.

Malacañang was “pleased” with the comparative survey showing Duterte is so far outpacing his predecessors.

“The President accepts this public appreciation with all humility,” said Presidential Spokesman Harry Roque Jr in a statement.

He said Duterte and his Cabinet will “continue to work and advance public interests” and build “a nation worthy of Filipinos.” – Pia Ranada/Rappler.com