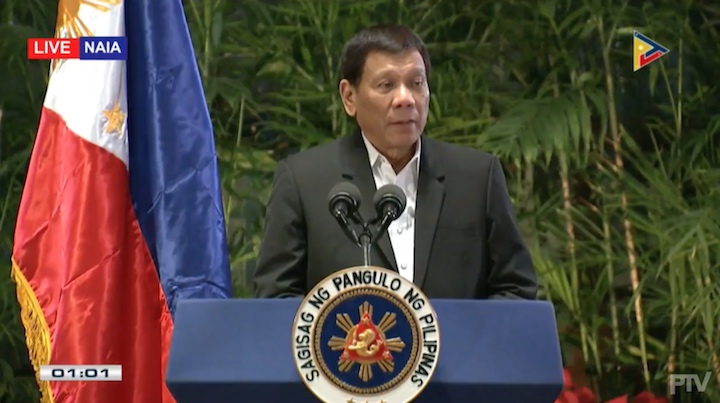 MANILA, Philippines – President Rodrigo Duterte said he was certain that US President Donald Trump will not raise the issue of extrajudicial killings (EJK) in the Philippines when they meet on the sidelines of the Association of Southeast Asian Nations (ASEAN) Summit and Related Meetings in Manila.

Duterte made the bold prediction in response to questions in a news conference upon his arrival from the Asia-Pacific Economic Cooperation (APEC) Summit in Vietnam past midnight Sunday, November 12.

Asked whether Trump discussed with him the drug-related killings in the Philippines during their casual encounter in Vietnam, where the two met for the first time, Duterte said: “Words of encouragement, not extrajudicial killing. Well, he cannot afford it. We do not talk about this thing because first of all, they are not true; and the second, we do not do it.”

Pressed further if they would talk about it when they meet in Manila this week, Duterte said, “I’m sure he will not take it up.”

Asked if he will discuss it with Trump in the coming days, Duterte replied, “He is not the Human Rights Commission,” adding that he is only part of the 3 branches of the US government, like in the Philippines.

Duterte also explained that him threatening to kill illegal drug perpetrators does not amount to conspiracy.

“If at all, criminal liability is personal. That’s the rule. When you commit a crime and there is no conspiracy, it is not transferred to anybody else,” said Duterte.

“By saying that I will destroy you or kill you, that is not a conspiracy. That is the rage in my heart for treating the Filipinos like shit,” he continued.

Duterte later said that if Trump would ask him about how he was implementing the fight against illegal drugs, he would reply with “stricter rules” and “hard enforcement.”

Trump will be among leaders from 19 countries, plus the heads of the United Nations and European Union, coming for the ASEAN Summit and meetings, which will begin with a banquet on Sunday night followed by summits on Monday and Tuesday. (READ: Philippines’ Duterte set for drug war backing at summit)

Rights groups have expressed alarm and disappointment that Trump and most others are likely to endorse or stay silent over Duterte’s violent rule, which has seen thousands of people killed. – With a report from Agence France-Presse/Rappler.com