Suspending OEC processing for 15 days: Is it worth it? 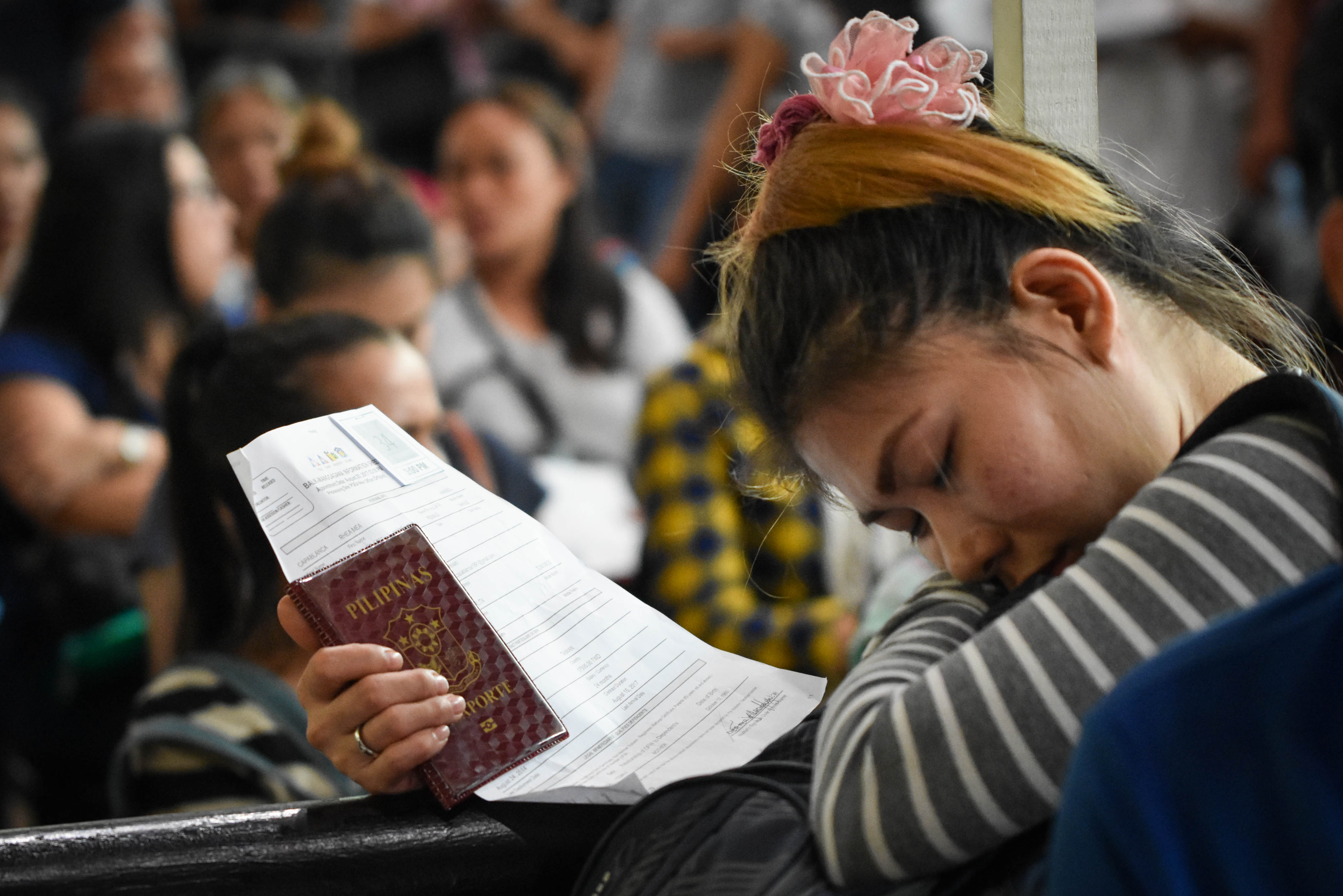 MANILA, Philippines – Jean (not her real name) had it all planned out: go to Manila, process her papers, and perhaps drop by Divisoria to buy more clothes she can bring with her to Jordan where she’ll be working as a domestic helper.

She’s not new to the overseas Filipino worker (OFW) life. Jean has been an OFW in Hong Kong for a little less than two years before she went back to the Philippines and decided to work abroad again.

Everything was moving smoothly, until Friday, November 11, when the Department of Labor and Employment (DOLE) announced that they will be suspending the processing and issuance of the overseas employment certificate (OEC) for new hires in order to investigate reports of illegal recruitment.

The OEC is a requirement for OFWs to work abroad.

According to the announcement, Jean will have to wait for 15 working days starting November 13 until December 1 for her to finally be able to process her OEC.

“This is just a suspension for 15 days,” DOLE Secretary Sylvestre Bello III said during the press conference announcing the suspension.

But it’s not that simple, Jean shared, as she lives in Davao City and had to travel all the way here in Manila to process her papers and wait for her deployment. She is lucky enough to have relatives living here, but every day spent here staring at limbo is also costing her money for food and other expenses.

Jean’s problem is echoed by other members of the OFW sector.

The Pilipino Licensed Agencies Accredited to Taiwan (PILMAT) appealed to the Office of the President to lift the suspension of the processing of OECs because it is resulting in an “income loss for the workers, most of whom are supporting their respective families.”

According to PILMAT, many of these workers have already resigned from work to prepare for their deployment. Like Jean, those from the provinces are already staying in Manila.

PILMAT added that if the OECs will not be issued, “there will be loss of opportunities and deprivation of livelihood and economic benefits.”

PILMAT said that many Taiwanese companies and factories are already rushing to deliver their commitments for the holiday rush. They added that FoxConn, a company involved in the production of Apple products risks having their production schedules derailed if their workers do not arrive on time.

“It will affect the credibility of the Philippines to address the job demand of Taiwan and other first world countries. There could be job loss, retaliation or even penalty,” they said in the appeal.

Recruitment and migration expert Emmanuel Geslani said the order will have a “damaging effect to land-based agencies who have contractual obligations with foreign employers.”

“Airline tickets will have to be rebooked, principals will be angry with agencies, [projects will be delayed], wards of HSW agencies will be upset,” Geslani said in a statement.

Geslani also said that DOLE did not consult the industry about this move.

“The economic losses of the land-based agencies will amount to $ 2,600,000 million… just for the re-booking of 50,000 workers…since most of the departing workers already have confirmed bookings,” he added.

The Federation of Free Workers lauded DOLE’s action as “a good stop-gap measure.” But the labor organization stressed there are possible effects on aspiring OFWs.

“We hope the new OFW applicants will not lose out in the process if the suspension of OEC issuance will result in the lapse of their job placements, as some of them have sold or pawned land, property and other things of value just to raise the amount needed for placement,” said FFW Vice President Julius Cainglet.

Bello shared that there are reports that eighty to ninety percent of direct hire are victims of illegal recruitment and that in the POEA, “there are people there who are earning as much as a quarter of a million [pesos] for the issuance of OECs.”

The labor secretary that this is a grave problem that needs to be “nipped in the bud,” even if the suspension will affect around 75,000 would-be OFWs.

But this is not the first time the department suspended the issuance of OECs this year. 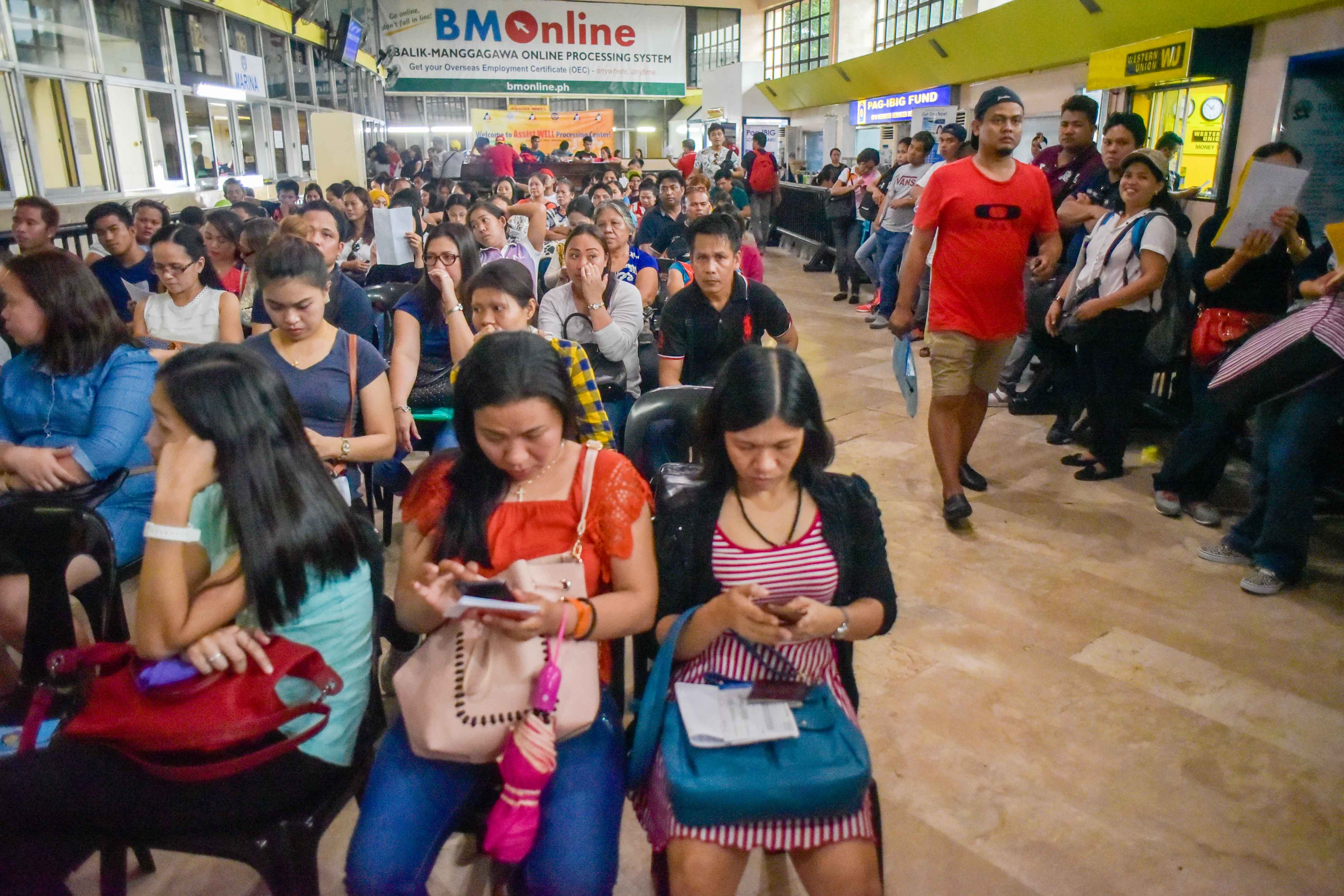 The processing of OEC for direct-hired OFWs has been suspended in April, amid reports that some employees of the POEA have been extorting money from OFWs in exchange for the processing of exemptions from the direct hire ban.

Bello lifted the suspension after three weeks, saying that their investigation has ended and a reorganization within POEA has been made.

“Minabuti ko na imbestigahan na muna, at ngayong tapos na ang imbestigation, alam na namin kung sino ang mga involved, at nagkakaroon ng reorganization within the agency (POEA),” he said in a statement. (I decided to investigate first, and now that it’s over, we know who’s involved and the POEA has been reorganized.)

Asked during press conference last Friday about the results of this investigation, DOLE Undersecretary Dominador Say said that some of the culprits have been removed from the POEA, but reports from victims continued coming in the following months, triggering this new investigation.

Say said that they might have to do it again, when circumstances require.

(They stop when there’s an ongoing investigation. But illegal recruitment being a very lucrative, activity, they will just do it again. When circumstances require, we will suspend and investigate again. Because even if old players are gone, new players come in.)

Militant migrant group Migrante International slammed the move as another “band-aid solution” to a longstanding problem and instead called for the immediate abolition of the OEC.

“Bold and momentous as it may seem, DO 185 is but a band-aid solution to the rampant illegal recruitment practices that DOLE is fully aware of. It does not address the root causes of illegal recruitment and human trafficking. Unscrupulous recruitment agencies and employers will only find a way around this Order and tie OFWs to more exploitative arrangements,” said Arman Hernando, Spokesperson of Migrante International.

Hernando added that DOLE should go beyond penalizing corrupt government employees and reorganizing the POEA. He insisted that identities of these corrupt employees, as well as the people and business entities that they are coddling, must be disclosed to the public and be ordered to pay all their victims.

Soriano suggested for the POEA to make a whitelist of recruitment agencies and foreign employers who have no proven records of prohibitive recruitment activities and maltreatment of OFWs.

PILMAT on their part said that there is already a meticulous documentation procedure implemented before a visa to Taiwan can be issued, already protecting OFWs from illegal recruitment.

Geslani meanwhile argued that since the problem is with employees of POEA and a few rogue recruitment agencies, the move should not negatively affect legitimate and reputable agencies that follow government rules and regulations. – With reports from Patty Pasion/Rappler.com

*Non-disclosure of name requested by interviewee