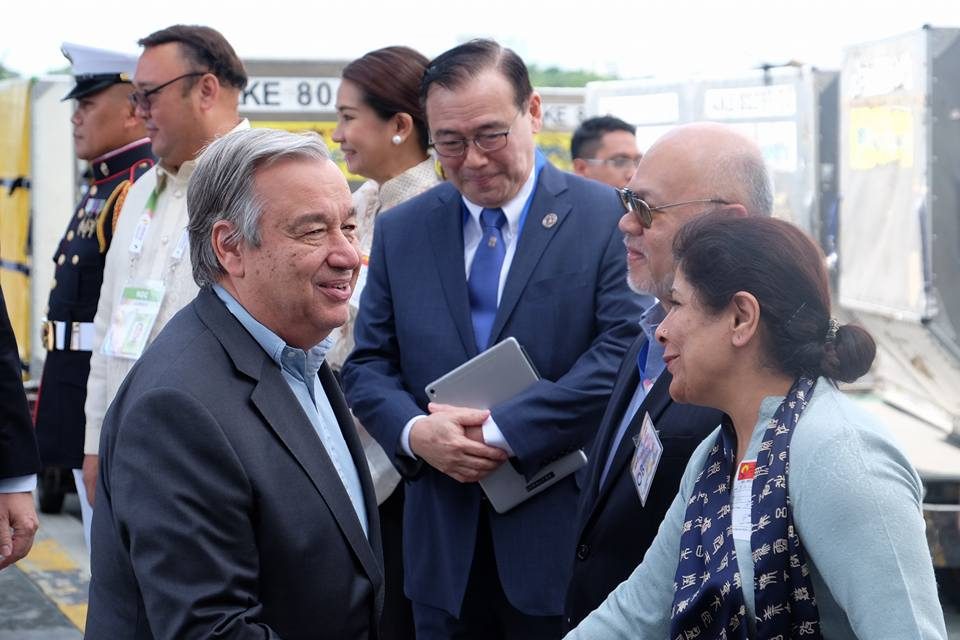 Guterres, who only assumed the post in January, took a commercial flight to Manila and was welcomed in a simple ceremony at the Ninoy Aquino International Airport on Sunday, November 12.

Presidential Spokesperson Harry Roque and Ambassador Teodoro “Teddbyboy” Locsin Jr, Philippine Permanent Representative to the UN, were at the airport to welcome Guterres.

Duterte, however, did not preside the ASEAN-UN Summit on Monday, November 13. Malacañang explained that there was scheduling conflict because of the delays in the meetings held that day, and  Duterte went to the bilateral meeting with Russian Prime Minister Dmitry Medvedev, which coincided with the ASEAN-UN Summit.

During his opening remarks at the ASEAN-UN Summit, Guterres spoke about human rights but did not touch on the host government’s controversial drug war. (READ: What ASEAN Summit world leaders said on human rights, PH drug war)

He focused on the Rohingya crisis in Myanmar and called on ASEAN members for humanitarian assistance. Guterres also wants to cooperate with these countries – known for their silence on human rights issues – to strengthen the ASEAN Intergovernmental Commission on Human Rights. (READ: The Deafening Silence of ASEAN on Human Rights Violations)

Much of his statement was on addressing violent extremism and terrorism in the region. Southeast is vulnerable to such threats, with the Islamic State (ISIS) establishing its base in the region. This was evident in the war against terrorists in Marawi City that lasted for 5 months.

“The United Nations stands ready to provide technical support to ASEAN and its member countries in their efforts to counter terrorism and violent extremism, and to combat transnational crime, including drug trafficking and people trafficking, through policies able to protect their citizens with effective law enforcement and respect for human rights,” Guterres said in his speech.

On the sidelines of the Manila summit,  Guterres met with the Philippine UN staff. He reminded them of their aim to meet the Sustainable Development Goals and to push for the rights of the people displaced by violence and conflict.

Since Duterte waged his bloody war on drugs as a key government campaign, the Philippines’ relations with the UN has been tense. Duterte had slammed the UN and Ban early in his presidency for raising concerns over possible human rights violations in his drug war.

A few months before he called Ban a “fool” for criticizing his drug war, Duterte exchanged pleasantries with the then UN chief at the ASEAN welcome dinner in Vientiane, Laos, in September 2016 – the Philippine leader’s first international event as president. But he declined Ban’s request for a meeting as he had too many other bilateral meetings scheduled at the time.

Duterte’s war against drugs has resulted to thousands of deaths in legitimate police operations and vigilante killings, prompting the criticisms from UN special rapporteur for summary executions Agnes Callamard, another subject of Duterte’s repeated tirades.

The last UN chief to visit the Philippines was Ban. He made an official visit to the country in 2008, where he was given arrival honors in Malacañang, met with then President Gloria Macapagal Arroyo, and was feted to a dinner reception at the Palace.

Ban returned to the Philippines in December 2013, as part of the UN’s humanitarian effort for victims of Super Typhoon Yolanda (Haiyan) in December 2013. During his 2013 visit, Ban paid a courtesy call on then President Benigno Aquino III, and had a joint press conference with then Foreign Secretary Albert del Rosario.  – Rappler.com