Sereno: I’m not the one who’s corrupt 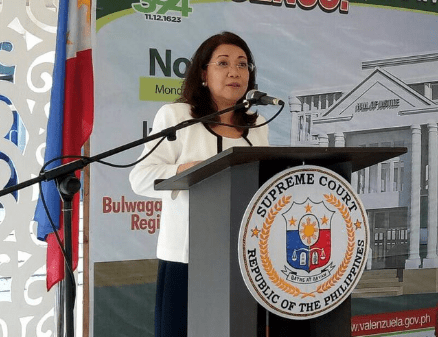 MANILA, Philippines – “Alam mo, kung may kumita sa corruption, hindi ako ‘yun (If there was someone who profited from corruption, it’s not me).”

Chief Justice Maria Lourdes Sereno made the statement in an interview with GMA-7’s Winnie Monsod on Monday night, November 20, where she denied corruption allegations stated in an impeachment complaint filed against her by lawyer Larry Gadon.

It was a different Sereno who appeared on Monsod’s Bawal ang Pasaway. She rarely grants media interviews and press conferences, reads prepared speeches in events for media coverage, and does not give ambush interviews. While she has spoken up on some issues, such as the threat of a return to martial law, she usually delivers her message in a subtle way.

In the interview aired on Monday, Sereno directly addressed the allegations against her. Asked why she felt she had to come out to air her side, the Chief Justice said,  “If you just allow the side of Gadon and his team to give the narrative, it will be such a great loss to the country.”

On President Rodrigo Duterte’s corruption allegations against her, Sereno said: “Walang basehan ho ang haka-haka niya (His speculation has no basis). I think he was fed wrong information.” (READ: How Sereno answered her impeachment complaint)

She added that if anyone made money from corrupt activities, she’s not among them, prompting Monsod to ask, “Sino (Who)?”

Faced with an impeachment complaint, Sereno has been forced to break her apparent self-imposed rule of dignified silence as she has directly defended herself even when she has a team of spokespersons made up of 4 notable lawyers.

On Monday morning, she appeared on ANC’s Headstart with Karen Davila to address the same issue.

Accountable to the people

Sereno used the media platform to send her enemies a clear message: she is accountable to the people.

(My accountability is to the people. I am not there [in the Supreme Court] to be loved by everyone, to be a good team player.)

(That’s not my objective. My objective at the end of the day is that when the people ask what I’ve accomplished at the Supreme Court, I can tell them, this is what we did.)

Sereno’s accuser, Gadon, wants to play up the narrative that the High Court does not support Sereno by comparing the silence of employees under Sereno, to the rallies and vigils they held for the late Renato Corona who faced impeachment in 2012. (READ: Does Sereno have SC’s support? Spokesman downplays narrative)

Sereno, in turn, said Gadon violated his verification when he swore that his complaint is based on “personal knowledge.” (READ: Sereno camp: Gadon himself says allegations not impeachable)

Sereno said it is perjurious for Gadon to claim “personal knowledge” when there are only 15 of them “inside a room,”  referring to the 15 justices who make up the High Court.

When Monsod asked whether Gadon’s information could come from one of the SC justices, Sereno said that this remains to be seen.

“I’ve never met him and I don’t know why he’s [Gadon] saying all of those things against me. Where does this motivation come from? I think he should really answer that,” the Chief Justice said.

‘My conscience is clear’

During the interview with Monsod, Sereno also opened the doors of her home to the TV crew and showed parts of her 2-story, 4-bedroom house bought in 2004.

Again, Sereno explained that their house and lot, one car, and the hospitalization expenses they spent on her parents and in-laws were funded by the P30-million earnings she got as a private lawyer working for the government from 2004 to 2009.

Sereno said that every time she received her fee, the government automatically deducted the tax, so all her earnings from the job were declared to the Bureau of Internal Revenue (BIR).

What remained of her earnings come 2010, and the properties purchased from her Piatco case earnings, are declared in her SALN as required by law, following her appointment as SC associate justice in 2010.

In a speech at the induction of new officers of the Integrated Bar of the Philippines (IBP) Davao City Chapter on September 30, Duterte accused the “head of the Supreme Court” of excluding her Piatco earnings from her SALN, and urged the official to “resign.”

On Monday, Sereno said in an interview on ANC that her “conscience is clear.”

“Actually it is not that difficult [to handle this issue] because my conscience is clear. The ones who are opposing me, they are the ones who have a very complicated life now. Mahirap yatang magsinungaling na kaya nilang patunayan (It’s difficult to tell a lie that they can prove),” she said.

On Tuesday morning, November 21, Sereno led the inauguration of a 3-story regional trial court (RTC) building in Valenzuela City, where she urged court employees to “stay faithful to their sworn duty” and “zealously guard our independence as jurists notwithstanding the political consequences.”

“These are challenging times and it is difficult to keep on saying no to the powers that be, but this is part of the sacred trust for which we have made our vows,” the Chief Justice said. – Rappler.com