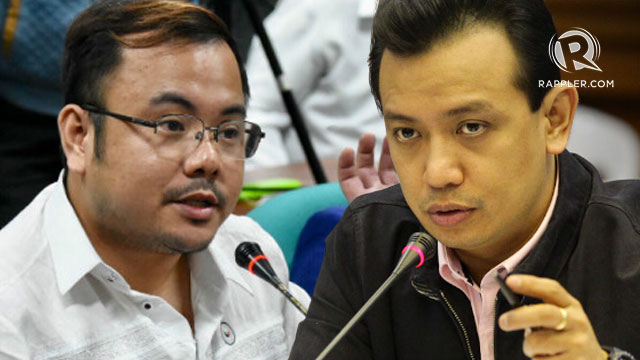 Trillanes said Nieto’s claim was malicious and outright wrong, since the transcripts of Trump’s press statements provided by the US embassy do not contain remarks about the senator.

“Being a very vocal and staunch critic of President Rodrigo Roa Duterte, of whom Respondent Nieto is a self-confessed diehard supporter and defender, Respondent Nieto’s post was clearly made solely for the purpose of besmirching my reputation and maligning my name,” Trillanes said in his complaint.

The senator said Nieto is liable for cyber-libel and should be imprisoned as well as made to pay for civil damages amounting to P1 million and legal fees of P250,000. (READ: NUJP hits Thinking Pinoy blogger RJ Nieto as ‘barefaced liar’)

The Revised Penal Code imposes prision correccional or imprisonment from 6 months to one year to 6 years on those violating the latter.

Trillanes had earlier filed cyber-libel and other criminal and administrative charges against another pro-administration blogger, Presidential Communications Operations Office Assistant Secretary Mocha Uson, who had alleged that he had secret bank accounts in Singapore. – Rappler.com