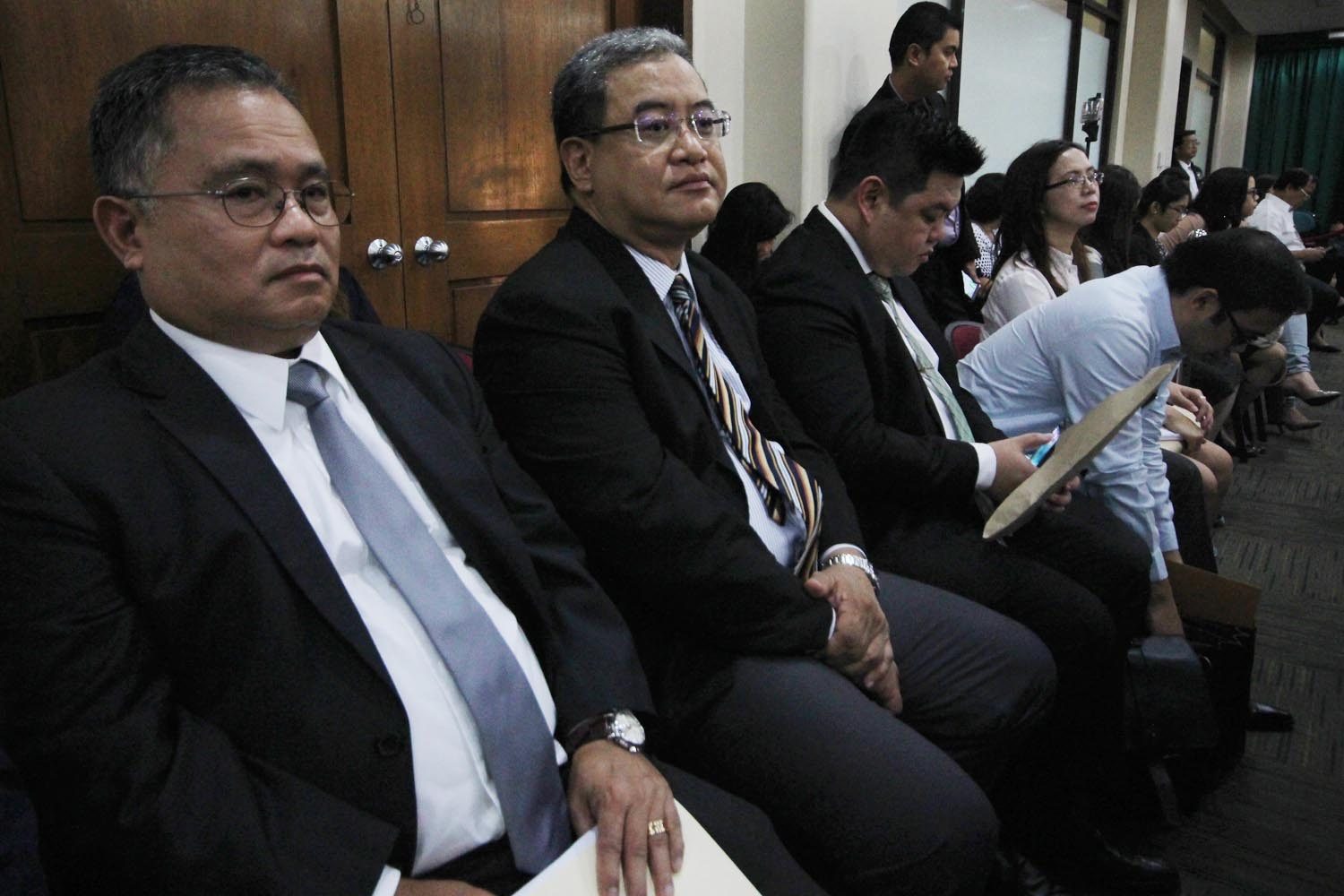 Facebook Twitter Copy URL
Copied
'We are willing to face them before the Senate where the rights of the chief justice will be protected,' says Alexander Poblador, lead counsel of Chief Justice Maria Lourdes Sereno

MANILA, Philippines – Minutes after a House panel barred them from participating in deliberations on an impeachment complaint against Chief Justice Maria Lourdes Sereno, lawyers of the chief magistrate said they were “inclined” to have the proceedings “expedited” and have the case forwarded to the Senate sitting as in impeachment court.

“It is our inclination to have the proceedings before the committee expedited if they believe that the complainant has evidence then by all means, prepare the articles of impeachment,” lawyer Alexander Poblador said in a media interview on November 22, Wednesday, on the sidelines of a justice panel hearing on an impeachment case against Sereno.

“We are willing to face them before the Senate where the rights of the chief justice will be protected,” Poblador added.

The House committee on Justice on Wednesday began hearings to determine probable cause to pursue the impeachment complaint. Oriental Mindoro 2nd Representative Reynaldo Umali, committee chairman, wants the House plenary to vote eventually vote on the committee report – wherein they will either recommend on reject impeachment – by December 13.

Still, Poblador said the legal team is “considering all options,” including going up to the Supreme Court.

“The decision to expedite would really be the committee’s. We are hoping that they would in fact now expedite the process if they believe that Gadon has evidence…why go through this hearing if not to provide evidence, which Gadon seems not to have? In that case, why not go to the Senate?” he reiterated.

For the case to reach the Senate, the House – through a plenary vote – would have to impeach Sereno first. If that happened, she would be the second chief justice in recent history to be impeached, after the late Renato Corona.

After the vote on Sereno’s motion on Wednesday, Umali assured Sereno she would not be deprived of her right to counsel. Majority Leader Rodolfo Fariñas also said that cross-examinations aren’t allowed in preliminary investigations, which the committee hearing was akin to. Umali said Sereno’s lawyers can also course their questions through members of the committee.

Poblador said the setup was unacceptable.

Sereno was invited to the hearing but opted to skip it, instead submitting a Special Power of Attorney (SPA) to allow her lawyers to speak and act on her behalf.

The Sereno camp said the House justice committee had denied Sereno her constitutional rights when it thumbed down her motion.

“This is a sad day for justice in this country that the Chief Justice, who has fought steadfastly to uphold the Constitution and the right of the citizens, has now been denied her own constitutional rights,” said lawyer Josa Deinla, one of Sereno’s spokespersons.

Deinla said Sereno looked foward to the time when the proceedings would reach the Senate and hopefully there, “her rights will be respected.”

She reiterated that the House ruling violates Section 13(2) of their own rules which says that “the participation of counsel for the witness during the hearing and while the witness is testifying shall be limited to advising on the legal rights of the said witness.”

“It is difficult to understand how this rule can defeat the rights of the Chief Justice to counsel when this right is enshrined not only in the very Rules or Procedure on Impeachment but in the Constitution itself that is read into such rules,” Deinla said.

She said it is ironic for the committee to deny Sereno’s lawyers the right to cross-examine, yet House leaders are saying that Sereno should be the one to cross-examine herself.

“Even the position of the committee that Sereno must conduct the cross-examination herself, concedes that she has such a right,” Deinla said. – Rappler.com