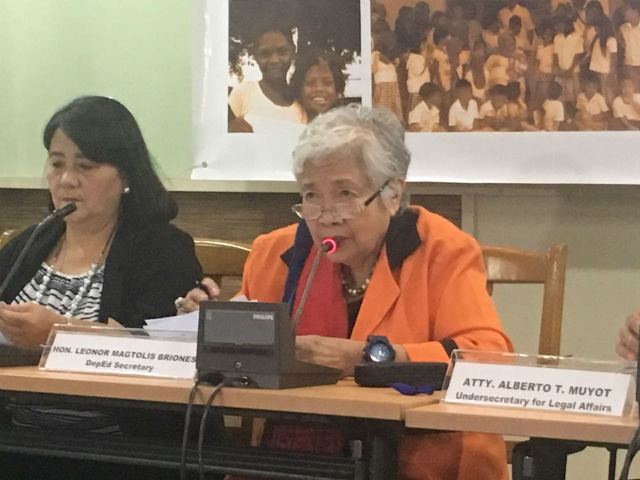 MANILA, Philippines – The Department of Education (DepEd) reiterated its commitment to keep schools as “zones of peace” in times of armed conflict, as Lumad groups continued their picket outside the department’s headquarters in Pasig City.

Education Secretary Leonor Briones called a press conference on Wednesday, November 22, to answer the allegations being hurled against DepEd by Lumad groups camped outside ther office since last week.

The protesters urged Briones to give permits to all Lumad community schools in Mindanao and condemn alleged military attacks against the said schools. They also want Briones to revoke DepEd Department Order (DO) Number 221, series of 2013 which, they argued, allowed military presence in schools.

During the press briefing, Briones announced that she already signed a new DepEd DO No 57, series of 2017, which “supersedes” DO 221. The document was signed on Tuesday, November 21.

“It already superseded even before the circular. It was preceded by the declaration of the Department of Education that schools should not be used as a venue for any kind of military operations from either side. And the AFP already agreed. We both signed already. Because now, the soldiers are not even allowed to sleep in the schools whenever they have operations,” said Briones.

Unlike DO 221, the new DO 57 no longer contains guidelines in the conduct of military activities in the premises of a school or a hospital.

“This order supersedes Department Memorandum No 221, s of 2913. All prior department orders or other issuances, or provisions thereof, which are inconsistent with the department order are hereby repealed, revised, or modified accordingly,” read DO 57.

Education Undersecretary Alberto Muyot also said that prior to the Lumad groups’ protest, he already met with representatives of the Center for Lumad Advocacy and Services, Incorporated, indigenous peoples coordinators, and legal officers in Cotabato.

He said DepEd vowed to assist interested Lumad schools to process their permits.

“In fact we committed to the 3 divisions who want to build schools in their area that we will provide them with technical assistance so that they would be able to comply with the requirements,” Muyot said in Filipino.

The Philippines currently has at least 2,900 schools catering to more than 2.9 million indigenous students. All of these schools went through the proper process to secure permits.

Lumad groups, led by the Save our Schools network, have been struggling to raise awareness about the plight of Lumad children since July. According to them, the extension of the declaration of martial law early in July has displaced hundreds of students in Mindanao.

They even wrote letters addressed to President Rodrigo Duterte in a bid to stop the imposition of martial law in their hometowns, but such calls were not heeded.

The Lumad groups have been in Metro Manila for 3 months now to raise awareness about their plight. Most of them have no houses to return to. – with reports from Raisa Serafica/Rappler.com