Nov 27, 2017 7:50 PM PHT
Camille Elemia
Facebook Twitter Copy URL
Copied
'I cannot accept this, that we will not impose tax, especially when we read about some extravagant wedding abroad,' says Senate Minority Leader Franklin Drilon during the debate, apparently referring to the lavish wedding of Vicki Belo and Hayden Kho 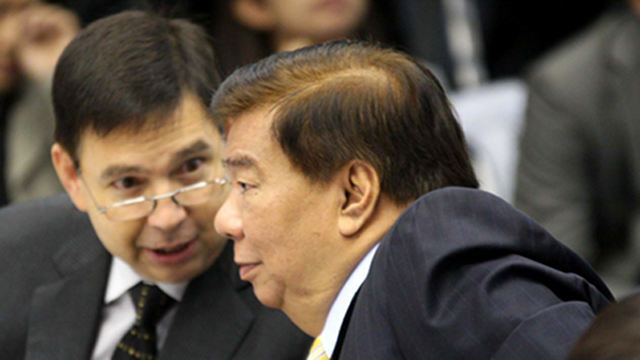 MANILA, Philippines – Senators on Monday, November 27, had a heated debate on the imposition of higher tax on cosmetic surgeries, ultimately deciding to impose an additional 10% levy.

But Drilon said it is “unjust” to not impose additional taxes on surgeries for aesthetic purposes when Filipino masses’ use of fuel would be taxed more, thus increasing transportation costs.

(Will the public understand the situation when fares go up? Can we say that breast augmentation cannot be taxed because that is not covered by excise tax?)

(The point, Mr President, is equity – the poor will face higher taxes because of excise tax, but the rich who undergo procedures like breast augmentation will not be paying additional tax. That’s not right.)

Villar, whose family runs real estate firm Vista Land, cited the removal of tax exemptions in housing. She expressed concern that lost revenues from cosmetic surgery tax would be imposed as additional tax on housing and other sectors.

“Every time we remove some taxes, we impose another tax to compensate because the target is always that amount,” Villar said.

(The VAT exemption has been removed for housing. The housing sector has suffered. The revenues will be sourced from documentary stamps instead, that’s also for housing. All who take out loans would have to pay double.)

Senator Richard Gordon, for his part, said the cosmetic surgery industry is “growing” and added that the Philippines could be a hub for medical tourism.

Drilon, however, did not buy this, saying cosmetic surgeries have long been done in the Philippines but the country has not become a medical tourism site.

(Breast augmentation has long been done here, and yet tourism hasn’t increased because of it, the country isn’t known for medical tourism. Something else gets bigger.)

“It is the equity principle. Taxation should be progressive. Those who could afford should pay taxes,” he added.

Drilon also said he cannot accept that new taxes would not be imposed on cosmetic surgeries when an “extravagant” wedding took place in Paris, apparently referring to the lavish wedding of celebrity doctor Vicki Belo and Hayden Kho.

(It really goes against what I believe in. I cannot accept this, that we will not impose tax, especially when we read about some extravagant wedding abroad. $2 million spent on an opera house in Paris, and yet we won’t impose tax on cosmetic surgeries? That’s not right.)

In the end, instead of conducting a vote on the matter, Recto and Drilon reached a compromise: an additional tax of 10% – down from the original 20% – would be imposed on aesthetic procedures or operations.

The provision is not in the version of the House of Representatives. Once the Senate finalizes its version, both chambers of Congress have to convene a bicameral conference committee to thresh out differences. – Rappler.com