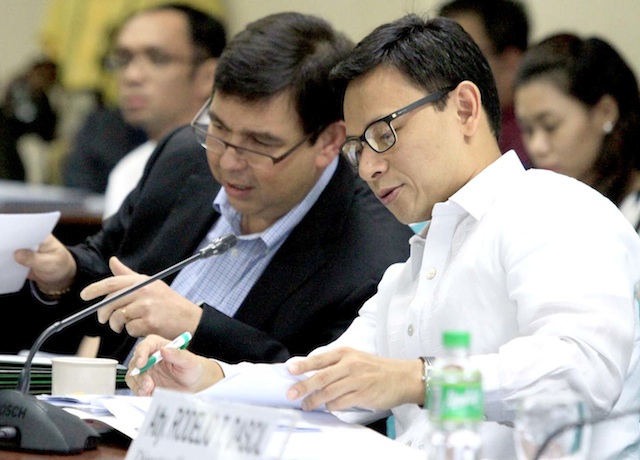 Voting 17-1, the chamber passed Senate Bill 1592 or Tax Reform for Acceleration and Inclusion (TRAIN) on Tuesday, November 28, after marathon deliberations. Only Senator Risa Hontiveros opposed the passage of the measure.

Now that the Senate has finalized its version, it will have to convene a bicameral conference committee with the House of Representatives to thresh out differences.

Senate Minority Leader Franklin Drilon expects a difficult time in the bicam due to the polarizing provisions in the two versions.

(I expect rough sailing because of the many disagreeing provisions in the Senate and House versions. The bicam will really be difficult.)

The Senate version reduced income tax rates of almost all or 99% of the 7.5 million individual taxpayers.

Filipinos earning an annual P250,000 and below will be exempt from paying income taxes. This includes self-employed individuals and professionals.

The Senate also exempted the first P250,000 annual taxable income and retained the P82,000 tax exemption for 13th month pay and other bonuses.

For self-employed individuals, the Senate approved an 8% flat tax on gross sales or receipts to “encourage” them to pay their taxes correctly.

The 8% flat tax is made optional for those earning below the value-added tax (VAT) threshold of P3 million so they can choose which tax scheme is more favorable to them – either the 8% flat tax or schedular personal income tax rate with deductions.

The tax rates on fuel approved by the Senate are lower than that of the House.

The Senate version excluded kerosene as it is widely used for lighting and cooking by around 3 million households in far-flung areas. The House, meanwhile, approved a tax rate of P3 per liter for 2018, P5 for 2019, and P6 for 2020.

The Senate also reduced the tax rate for liquefied petroleum gas, which is commonly used for cooking. The Senate version imposes P1 tax per liter until 2020 while the House wants P3 tax for 2018, P2 for 2019, and P1 for 2020.

The original proposal of the Department of Finance (DOF) was a straight out P6 increase, while the House approved a scheme of P3, P2, and P1 until 2020.

The Senate version also approved a “safeguard” provision that would suspend the increase if Dubai crude oil exceeds $80 per barrel or if the consumer price index (CPI) breaches the maximum inflation target set for the year.

Just like the House, the Senate excluded milk and coffee from being taxed, as well as 100% natural fruit and vegetable juices, unsweetened tea, meal replacements, and medically indicated beverages.

The Senate also excluded sweetened beverages that use coco sugar and stevia.

The chamber used a 3-tier classification. It lowered the tax rate on beverages using caloric and non-caloric sweeteners to P4.50 per liter and imposed a tax of P9 per liter for beverages using high fructose corn syrup.

On the other hand, the House approved a 2-tier scheme, where P10 per liter will be imposed on local sugar and P20 on imported products.

The Senate also approved a 2-tier tax scheme for automobiles that is supposedly easier to administer.

Under the Senate version, cars with a net manufacturing price of P1 million and below will be taxed 10% while those that cost more than P1 million will be levied 20%.

Hybrid and electric cars are exempted from taxation to encourage greener and cleaner transportation options.

The Senate increased the VAT threshold from P1.9 million to P3 million. Ths means small businesses with total annual sales of P3 million and below will be exempt from paying VAT.

The chamber also retained the VAT exemptions for raw food and agricultural products, health and education, as well as those for senior citizens, persons with disabilities (PWDs), business process outsourcing (BPO) firms, and cooperatives.

The Senate approved the VAT exemption for the sale of prescription drugs and medicines for all Filipinos as well.

It also retained VAT exemptions for leases below P15,000 per month, and of socialized housing, amounting to P450,000 and below. Mass housing projects that are worth P2 million and below located outside of Metro Manila will also continue to enjoy VAT exemption.

In an attempt to counter revenue loss from lowering the tax rates on fuel and other sectors, the Senate doubled the existing documentary stamp tax rates on documents, instruments, loan agreements, and papers from P1.50 to P3; the sales or transfer of shares of stock from P0.75 to P1.50; and certificates of profits or interest in property or accumulations from P0.50 to P1.

It also increased the final tax on foreign currency deposit units from 7.5% to 15%, and capital gains tax for stocks not traded in the local bourse from 5% or 10% to 15%.

The Senate also added a provision that would impose 10% excise tax on cosmetic procedures and body enhancements undertaken for purely aesthetic reasons.

In an unusual move, the Senate also doubled mining taxes despite the absence of committee hearings earlier to discuss the issue. – Rappler.com