Facebook Twitter Copy URL
Copied
Will Sanofi shoulder the costs of individuals who might contract severe dengue after receiving the vaccine? The company only says it is collaborating with the Department of Health.

MANILA, Philippines – French pharmaceutical company Sanofi Pasteur said on Monday, December 4, there is no way of tracing who among the over 700,000 Filipino youth given the Dengvaxia vaccine are at risk from contracting severe dengue. (READ: Sanofi: Dengvaxia not guaranteed to prevent dengue)

“Unfortunately there are no dengue diagnostic tests today that you can use in someone who has been vaccinated to tell if they had a previous infection before vaccination,” Dr Ng Su Peing, global medical head of Sanofi, said in a press conference.

Peing explained that available dengue diagnostic tests are instead geared toward diagnosing acute infection or “real infection in a patient.”

Sanofi announced last week that Dengvaxia, the world’s first dengue vaccine which it manufactured, could put those who have never been infected with the virus at an increased risk from developing severe dengue. (READ: Dengue vaccine more risky for people without prior infection – Sanofi)

On Monday Peing explained that there is risk of dengue before and after getting the vaccine. “Severe dengue observed in those who got the vaccine was not clinically different from those who had never been administered the shot.”

However, she said, when a person gets the vaccine after he or she has had an infection, the effectivity of the vaccine increases by up to 6 years. Dengvaxia increases the risk of contracting severe dengue for those who got the vaccine without prior infection.

This is why Peing said she would not recommend Dengvaxia for those who have not been infected with dengue.

She added that a test administered on someone who has had the shot would come out positive because the dengue vaccine stimulates immune responses, which would test positive for the infection.

“The dengue vaccine already stimulates immune responses, which means if you tested them they would come out positive because you stimulated the immune response. It doesn’t mean [necessarily] they’ve had dengue before, or there’s infection before vaccination,” Peing said.

“We don’t have a test that could be applied today to go back and tell if someone has been previously infected,” she added.

According to the Department of Health (DOH), 733,713 children 9 years old and above received the first dose of the vaccine in Regions 3, 4-A, and NCR.

The vaccine program has been suspended since the release of new findings on the vaccine. (READ: DOH suspends vaccination program)

The government’s mass immunization program was launched April 2016 under then-DOH Secretary Janette Garin. A total of P3.5 billion – an amount already paid in full to Sanofi – was spent on the program. 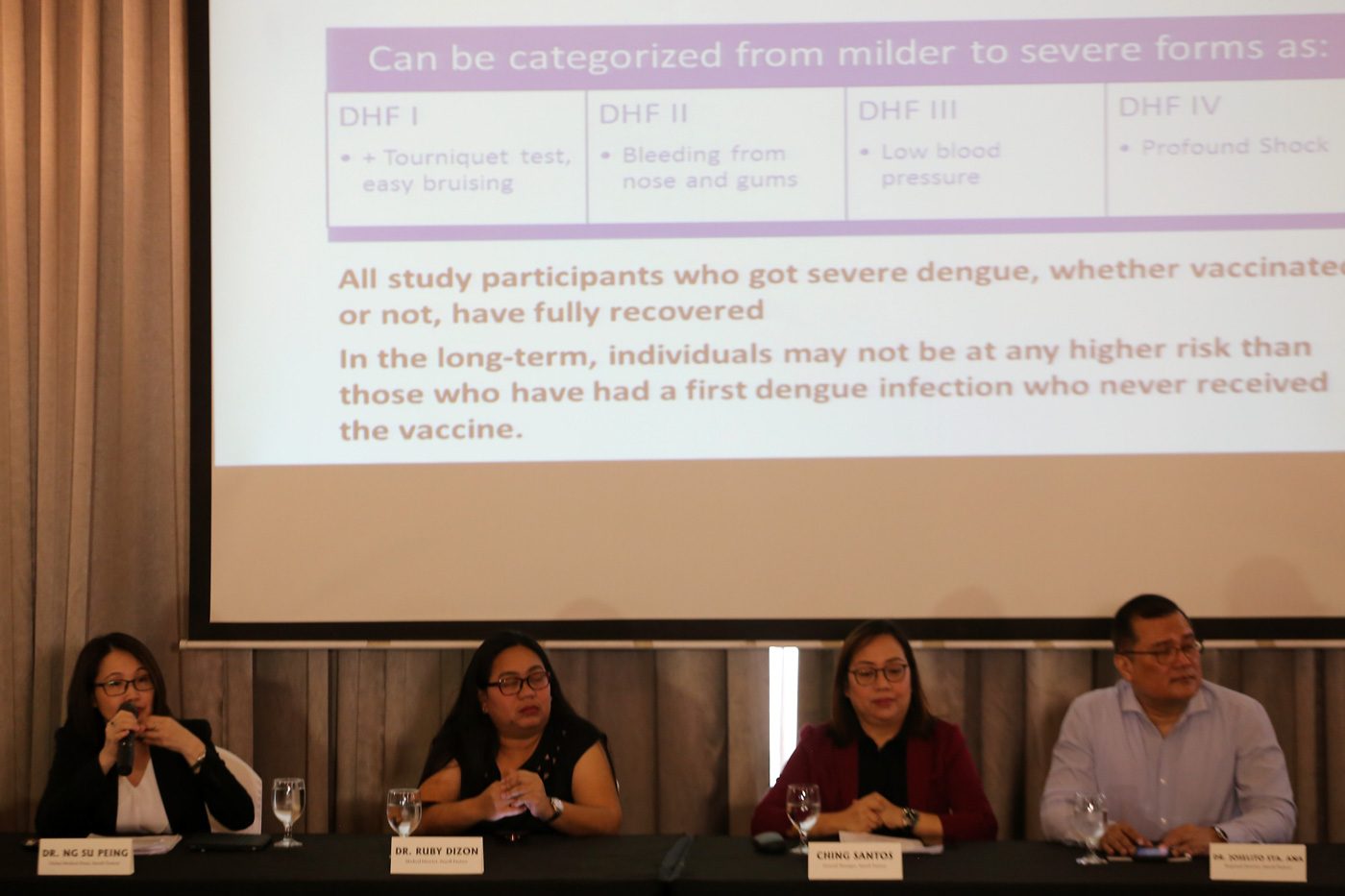 Ching Santos, general manager of Sanofi, said the company is in talks with the DOH on how to communicate to parents the new findings on the vaccine.

“Anytime within the next two days, we have several meeting with them including that of how to effectively communicate with parents [the new findings] to help the situation be more peaceful,” Santos said.

Santos said they will share with the public whatever actions are decided on with the DOH.

Asked whether Sanofi would shoulder the costs of individuals who might contract severe dengue after having received the vaccine, the company only said it is collaborating with the DOH and will continue to monitor cases.

The Food and Drug Administration (FDA) has stopped the sale of Dengvaxia in the Philippines until packaging labels are replaced to reflect the new warning.

However, there has been no product recall for the dengue vaccine. Suppliers have agreed to allow the company to inform health practitioners about the proposal for a new label to help their patients assess the risks and benefits of the vaccine.

Meanwhile, Justice Secretary Vitaliano Aguirre II said he has ordered the National Bureau of Investigation to probe Sanofi. Lawmakers are also set to investigate the DOH’s purchase of the vaccine.

The development of the vaccine was considered a major step in the prevention of dengue, with hopes that the drug could eventually help prevent millions of deaths.

According to the World Health Organization (WHO), dengue is the fastest-spreading mosquito-borne disease. It is endemic in over 100 countries, putting 40% of the world’s population “living in an area at risk for dengue.” – Rappler.com