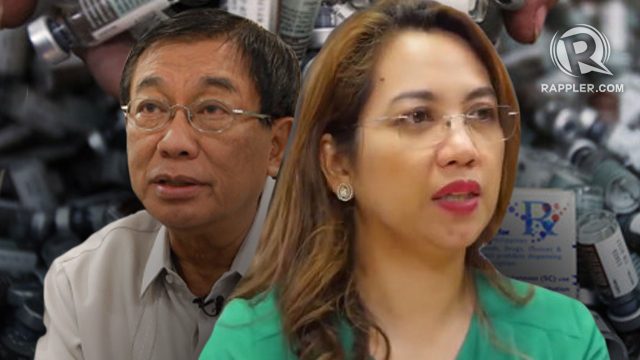 “Hindi po ito decision na ako lang. Hindi po ito na sinimulan lang noong pagpasok ko (This is not a decision that I made. This did not start when I came in),” Garin said in an interview with ABS-CBN News.

On December 1, the Department of Health (DOH) suspended its dengue vaccination program after French pharmaceutical giant Sanofi Pasteur revealed that its Dengvaxia dengue vaccine could cause more severe cases of dengue if administered on a person who had no prior dengue infection.

DOH, under Garin, launched the program in April 2016 amid opposition from health experts who questioned its “rushed implementation.”

In her latest interview, Garin defended her decision to continue the discussions on the dengue vaccine that started while Ona was still the health secretary.

(In 2014, I think June or July, Secretary Ona already announced that there will be a vaccine in 2015, probably in the middle of the year, and he already said that the department is contemplating putting it in their public health program but he also said that there’s no price yet, as it has not been discussed.)

News reports in 2014 support Garin’s claim. In July 2014, Rappler reported about a vaccine called CYD-TDV devised by Sanofi Pasteur and tested in the Philippines and 4 other Asian countries. This dengue vaccine showed promising overall efficacy.

But by 2015, Garin was already the health secretary.

(The talk started during his time. When I tackled the dengue situation at the DOH, there were two things: there were talks about trials on the dengue vaccine, and there was another trial, it’s a bit of an experiment, that was supposedly the cure for dengue. Those were the two things that were already there when I came in.)

Garin was referring to the controversial clinical trials of ActRx TriAct that Ona allowed to be conducted in at least 6 government hospitals in 2014.

Garin suspended Ona’s order, saying there was no legal basis for the anti-dengue treatment in the Philippines as ActRx TriAct has not yet been registered then by the Food and Drug Administration as food, drug, or supplement.

According to Garin, the DOH under her leadership continued the talks on the dengue vaccine since the World Health Organization and other countries were also looking into it.

(But the treatment ActRx TriAct, we saw that there were irregularities, that’s why we suspended it because it was already an experiment that did not follow the right process.)

The former health secretary said the clinical trials of the ActRx TriAct were “highly unethical.“

Garin and Ona both served as health secretaries under the Aquino administration. – Rappler.com