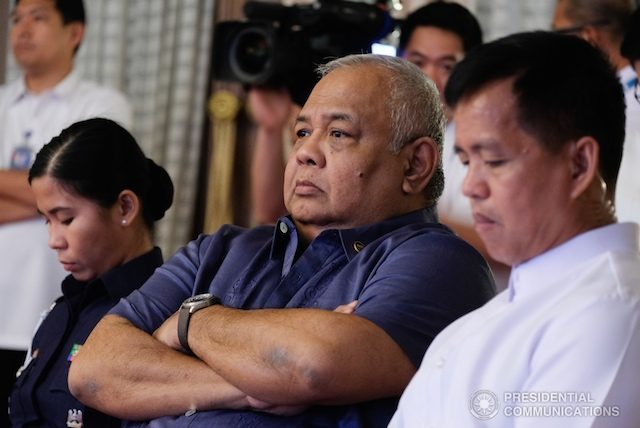 Medialdea made the statement on Wednesday, as the House and Senate convened in a joint session to discuss Duterte’s request for martial law to remain over Mindanao until December 31, 2018.

“We do not ask for an unlimited martial law. What we are seeking is an unlimited peace,” he said before the joint session.

The Palace official raised the same reasons stated in Duterte’s earlier letter to Congress in asking for the extension:

Medialdea said that the NPA’s “atrocities” in Mindanaoleft 41 dead and 62 injured on the government side. These “attrocities” also resulted n the death of 23 and injury of 6 civilians.

Duterte also cited the NPA’s attacks on business and private establishments in Mindanao, which led to the issuance of Proclamation No 360, which terminated peace talks with Philippine Communists. They were subsequently declared terrorists through Proclamation No. 374.

Duterte placed Mindanao under martial law on May 23, after local terror groups Maute and Abu Sayyaf attacked Marawi City. In late October 2017, Duterte declared Marawi liberated after Marawi siege leaders Isnilon Hapilon and Omar Maute were killed in a military operation. The military has since stopped combat operations in the main battle area.

Contrary to their critics’ claims, Medialdea said, the threat persists.

“In sum, the factual basis for the president’s [declaration of martial law and suspension of the privilege of the writ of habeas corpus] as affirmed by Congress and validated by the Supreme Court continues to exists despite the liberation of Marawi and the eerie silence in the main battle field, a state of actual rebellion subsits in Mindanao, perpetrated not only by the Daesh-inspired DIWL, but also by local terror groups, including the NPA,” he said.

“Public safety requires a further extension of martial law and the suspension of the privilege of the writ of habeas corpus in Mindanao in order to quell this rebellion completely,” added Medialdea.

The joint session is ongoing as of posting. – Rappler.com