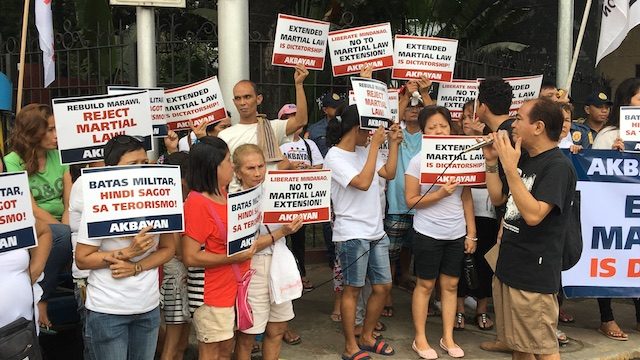 Facebook Twitter Copy URL
Copied
(UPDATED) Less than 50 protesters from Akbayan party list assemble as Congress begins deliberations on the extension of martial law in Mindanao. Later in the day, the other faction of the Philippine left gathers about a hundred members, to hold its own protest

MANILA, Philippines (UPDATED) – The streets were oddly almost quiet on Wednesday morning, December 13, as a joint session of Congress began  deliberations on the President Rodrigo Duterte’s request  to extend martial law in Mindanao.

There was a thin crowd at the gate of the House of Representives protesting the traditionally hot topic. Less than 50 placard-bearing members of the Akbayan party-list of opposition Senator Risa Hontiveros and affiliate group Sentro gathered to appeal to lawmakers arriving for the historic vote.

Machris Cabreros, Akbayan president, told the media they fear that martial law will only breed more terrorists in Mindanao. “The government is unable to address human rights abuses under martial law which will only give powers to terrorist groups to exploit and recruit victims of abuses,” she said.

The other faction of the left led by Bayan held its own protest after Congress expectedly rubber-stamped Duterte’s request.

The crowd was a little bigger – about a hundred – but it pales in comparison to its earlier protests. “Makibaka. Huwag matakot,” their signature chant echoed as the cars of lawmakers and the generals who attended the joint session exited at the gate.

Duterte’s caricature, showing him as the devil himself, can’t be missed on the big banner that read: “No to martial law extension.”

The other faction of PH Left gather at the gate of House of Representatives after Congress voted to extend martial law in Mindanao until end of 2018 @rapplerdotcom pic.twitter.com/CgZ9rDfz1q

The thin crowds seemed to reflect how the country’s opposition has been effectively weakened under President Rodrigo Duterte, a foul-mouthed leader notorious for verbally abusing his critics to the applause of his rabid supporters. His rough leadership style has endeared him to a majority of Filipinos.

Duterte’s has his allies controlling both chambers of Congress while he continues to demonize constitutional bodies like the Commission on Human Rights and even the Supreme Court for raising alarm over his leadership.

Martial law is traditionally a hot topic in a country that suffered widespread human rights violations during the dictatorship of the late president Ferdinand Marcos. Duterte ignored strong opposition to a hero’s burial of the strongman and allowed his burial at the Libingan ng mga Bayani.

Duterte has openly admired Marcos. In a recent speech before troops in Sulu, he said that aside from himself, Marcos was the only other Philippine president who really looked after the military. The declaration that was supposed to last only 60 days was extended until end of 2017 when the battle in Marawi dragged.

The Supreme Court affirmed the constitutionality of the declaration.

The battle in Marawi ended in October but Duterte claimed that a martial law extension is necessary to continue to address threats from “remnant groups” that aim to repeat the Marawi siege elsewhere in Mindanao.

Duterte also declared war with the communist rebels – an added target of the new martial law extension request – after he ended peace talks with them. He had officially tagged the New People’s Army as a terrorist organization.

Senate Minority Leader Franklin Drilon has led the opposition in arguing against the extension, citing the absence of an actual rebellion to justify martial law. – Rappler.com