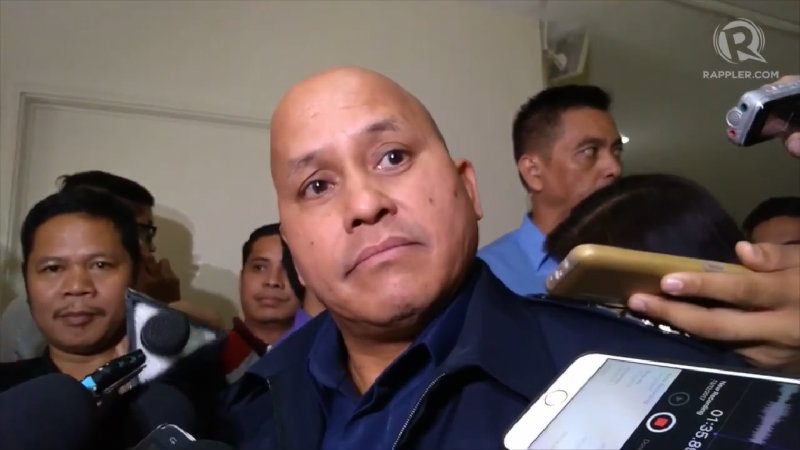 MANILA, Philippines – Philippine National Police (PNP) chief Ronald dela Rosa turned to humor and charm on Wednesday, December 13, when asked if an anti-drug campaign inside the country’s penitentiaries would be “bloodless.”

Asked if a BuCor anti-drug campaign would be “bloody” under his leadership, Dela Rosa shrugged. “You want it to be bloodless?” he asked reporters.

Pressed if his campaign would be bloody – echoing criticisms of how the PNP has implemented the drug war – Dela Rosa turned serious. “Not necessarily. It depends… it depends on the situation,” he added.

Dela Rosa, who is retiring from the police force in January 2018, is set to take over the post of BuCor chief. The bureau, which is under the justice department, is “charged with custody and rehabilitation of national offenders, that is, those sentenced to serve a term of imprisonment of more than three (3) years.”

Under President Rodrigo Duterte, the New Bilibid Prison (NBP), which is under BuCor, grabbed headlines over the administration’s efforts to end drug activities inside.

Convicts, including those who were convicted for other crimes, had apparently been able to continue running their drug empires from within the penitentiary.

Dela Rosa said his first move would be to “account [for] all drug lords” inside Bilibid.

Dela Rosa knows the post will be difficult. “There’s a mission. It’s mission impossible. To fix the BuCor,” he said.

The PNP chief, who was Davao City police chief when Duterte was mayor of the city, said he was told of his next post way back, around the time of a “resurgence” in the drug problem inside NBP.

Still, turning the post down isn’t an option, he said.

“Who am I to refuse the president who is my boss ever since and he will be my boss forever so I cannot say no,” he said.

Dela Rosa will be turning 56 in January 2017, the compulsory age of retirement.

It was rumored that he would be seeking an electoral post in 2019, the midterm elections. Asked if this was already out of the equation, he turned to humor again.

“I can run, I can walk, I can crawl, running towards whatever direction. But for now I have to help the president in his desire to cleanse the country of this drug menace,” he said. – Rappler.com