The impeachers: Out to get the Chief Justice and the Ombudsman Facebook Twitter Copy URL
Copied
Two factors are crucial to both impeachment bids: timing and the inside connections of those seeking to oust Maria Lourdes Sereno and Conchita Carpio Morales

In the last days this year of the House hearings on his impeachment complaint against Chief Justice Maria Lourdes Sereno, Gadon had been grinning ear to ear, his eyes sparkling whenever a justice of the Supreme Court took the microphone to say something critical of the chief magistrate.

His friends at the Volunteers Against Crime And Corruption (VACC), however, have not been as lucky.

On Wednesday, December 13, VACC had to settle with filing an impeachment complaint against Ombudsman Conchita Carpio Morales without the endorsement of a single congressman. Without the signature of an endorsing lawmaker, the House secretary general does not consider it officially filed.

But the group is not totally unsuccessful on the impeachment front. While the House committee on justice junked the impeachment complaint of two VACC members against Commission on Elections Chairman Andres Bautista in September, the House plenary later overturned the panel’s resolution and impeached the elections chief, who eventually just resigned.

What’s in an impeachment?

Timing has proven to be very crucial in the VACC’s bid to impeach Morales.

The group had been itching to file the complaint since May, and even announced in a press conference that it had secured the commitment of 30 lawmakers to endorse it. But no complaint was filed.

During that time, VACC chairman Dante Jimenez told Rappler that the group would launch a movement to demand Morales’ resignation, but this has yet to happen.

The issues against Morales died down and the complaint was shelved. The plan was revived in September, when Overall Deputy Ombudsman Arthur Carandang disclosed he was in possession of bank records of President Rodrigo Duterte which showed a cash flow of P1 billion.

In public addresses, Duterte threatened Morales that he would have her and the Office of the Ombudsman investigated by an anti-corruption body that he would create. He also said he would file an impeachment complaint against Morales for alleged “selective justice.”

It was the push that the VACC needed, so it went back to work on revising its complaint.

It created the perception that VACC was just going by Duterte’s words. The group denies that it takes orders from the President, but admits that his pronouncements will help chalk up the solicitation for endorsements.

“Those public statements may have generated support now for our complaint, but the filing is not upon the direction of the President,” VACC counsel Ferdinand Topacio said.

Rappler interviewed Topacio, Luna, and fellow VACC counsel Jing Paras in October, as they made the finishing touches on their complaint.

“For all we know, this might not even go to the committee anymore. If there will be an overwhelming support, this might just go straight to the Senate,” Luna said.

Under the rules, if a 3rd of the House members – or 97 representatives – endorse the complaint, the subject is automatically impeached and the complaint is directly transmitted to the Senate for trial.

Not one lawmaker has endorsed the complaint yet.

When the VACC lawyers submitted the complaint at the House on Wednesday, December 13, reporters were made to wait past the 2 pm advisory, and were told that the lawyers were in the holding room in the office of Speaker Pantaleon Alvarez.

At 4 pm, the lawyers went to the office of the House secretary general at the basement. They were accompanied by VACC chairmen Martin Diño and Dante Jimenez, former MRT chief Al Vitangcol, Tanggulang Demokrasya’s Glenn Chong, Vanguard of the Philippine Constitution’s Eligio Mallari, and relatives of the slain SAF 44 or the elite cops who were killed in the Mamasapano clash in 2015.

They had everything and everyone with them, it seemed, but the required endorser.

“We have waited for the filing of this, and we would not have filed it if we were not assured of endorsers. It just so happened that today is the last day of the session of Congress and there was the joint session and there are also hearings going on,” Paras said.

Pressed by reporters, Paras told them to wait until the office closes or “until this Congress is existing.” 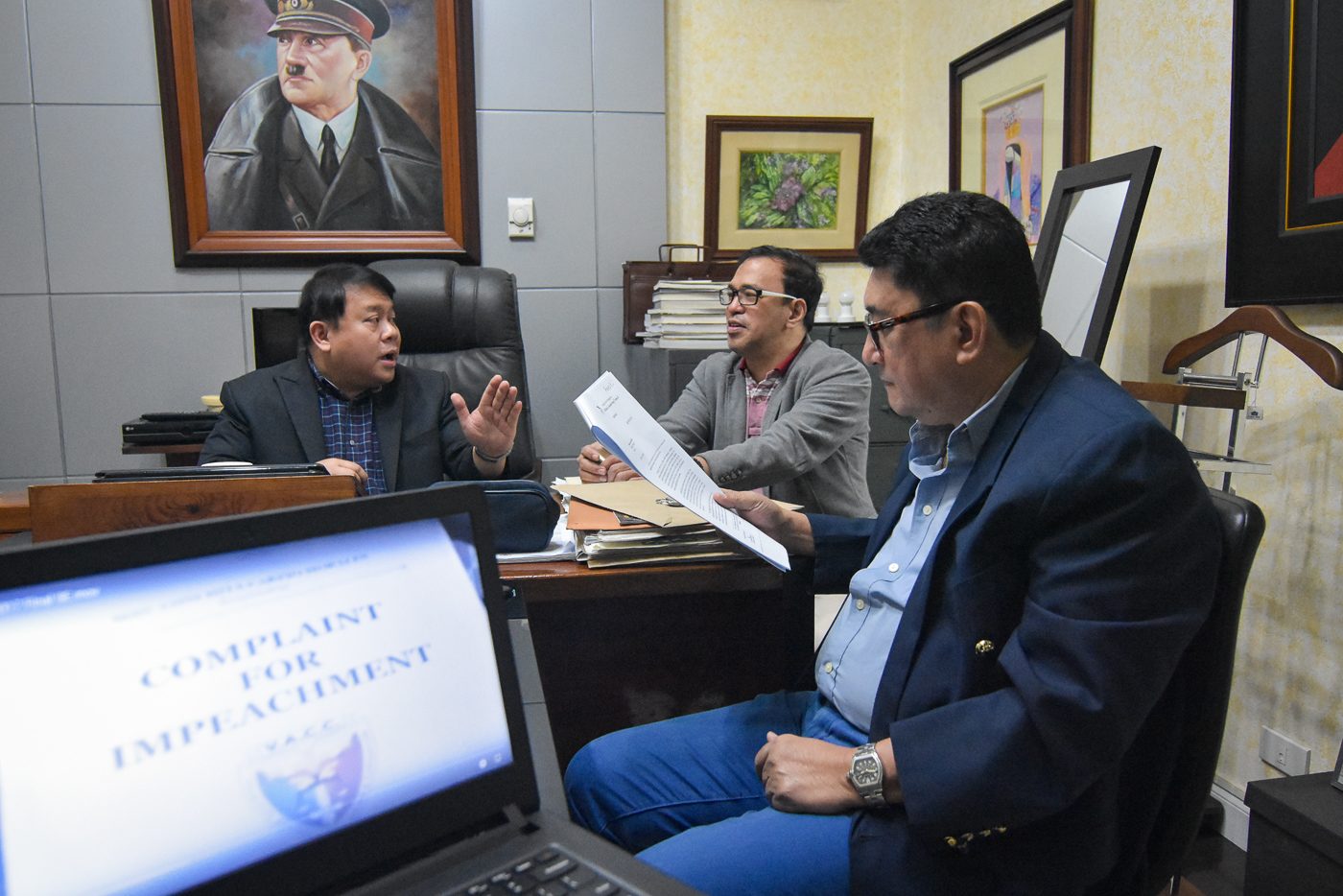 The VACC had done this before, when they filed an unendorsed impeachment complaint against Chief Justice Sereno.

Gadon, who identifies himself as “just a legal adviser” of VACC, waited more days until he filed his complaint, and, when he did, he had the endorsement of 25 lawmakers.

Gadon credits it to the fact that people from within the Supreme Court gave him valuable information, even documents, as early as November 2016, when he began his case buildup.

“I was really surprised that everybody was giving me copies of various documents that I could use in the complaint,” Gadon said.

The Morales impeachment complaint is backed by individuals who were indicted by the Ombudsman, including Negros Oriental Governor Roel Degamo, who has been dismissed from office twice by Morales.

Gadon said that, through intermediaries, he knew early on that SC justices would go to the House and say things that would boost his charges. It was an unprecedented event, House Majority Leader Rudy Fariñas had said in one hearing.

The VACC, however, doesn’t seem to have the same inside connections to pin down Morales. (READ: Avengers or Suicide Squad? When Sereno and Morales attend a forum together)

A draft impeachment complaint cited as betrayal of public trust Morales’ supposed partiality to the Aquino administration, inordinate delay in resolving cases, and an audit in 2016 over an unimplemented budget plan.

The final version of the complaint dropped the 2016 audit. That audit doesn’t seem to be of concern to the Office of the Ombudsman because the money was not even spent, and was accounted for.

“The Commission on Audit has not issued any notice of suspension or disallowance in any of the agency’s procurement activities,” said a source from the Office.

The complaint instead added the Carandang issue.

“She should be found guilty of maligning the President, she betrayed public trust for making a statement that is an affront to the highest official of the land, making him appear as a corrupt official,” Paras said.

Morales has inihibited from the investigation into Duterte’s wealth, but VACC alleges there is conspiracy between her and Carandang in disclosing bank records. VACC says disclosure is a violation of the anti-money laundering law, graft law, and the Ombudsman’s own rules.

Luna went as far as saying that the records in Carandang’s posession were “spurious” and invented by opposition Senator Antonio Trillanes IV, whom they had also sued for inciting to sedition over the same issue.

Are the impeachers protecting the President?

“If the Ombudsman undermines the Office of the President, it is our duty to protect the institution not because it is occupied by Duterte, but because the executive is the head of the entire government. If that is undermined, if the President falls, the entire government falls. Can you imagine the consequences upon the people? It would be catastrophic of astronomical proportions,” Luna said.

Detained Senator Leila de Lima, against whom drug charges were initiated also by the VACC, called the group “mercenaries” and “willing agents of vengeance and demolition.”

“Mercenary means we have been paid. I have yet to see any payment,” Topacio said in response, chuckling.

Topacio said that the reason they are “wrongly perceived” to be allies of Duterte is because the VACC shares the same values with the President in taking a tough stance against crime and corruption.

The VACC’s founding chairman, Jimenez, was an in-kind donor to Duterte’s presidential campaign.

But the warm relations stop, or so it seems, with Duterte’s son-in-law, Manases Carpio, the husband of Davao City Mayor Sara Duterte.

In its final impeachment complaint, the VACC dragged in Manases Carpio’s father, Lucas Carpio Jr, the brother of the Ombudsman.

The older Carpio was the lawyer to Jose Ma Clemente Salceda, who faced a complaint filed by Diño. The case against Salceda was dropped, and the VACC chided Morales for not inhibiting when there was a clear case of conflict of interest.

“It’s a ground that would probably cause the resignation of the Ombudsman. It’s that singular ground which will be a game changer,” Luna told reporters when they submitted the complaint.

“Until I get hold of a copy of the complaint, I have nothing to say,” Morales said in a statement.

Critics see the impeachment complaints as attacks against independent bodies, but the VACC and Gadon see it as public service.

Morales is retiring in July 2018, but the VACC is dead set on removing her from office now.

“There are some acts of the Ombudsman which may not be indictable offenses. We cannot charge her for those after she retires. For example, selective justice – there is no crime of selective justice. But she may be held to account for those in an impeachment trial. If we do not do this, we will not deter others from doing things which may not be indictable,” Topacio said.

Sereno is Chief Justice until 2030, so Gadon takes every opportunity to call on her to resign. If she does, Gadon said he would have achieved his goal.

Gadon hopes that the strong showing of justices against Sereno will force the Chief Justice to save face and resign.

Gadon is exerting all this effort while he becomes a laughing stock of sorts in the legal profession.

Former Solicitor General Florin Hilbay, a bar topnotcher, once tweeted, “Those taking the bar examinations who doubt their ability to pass that test, think of Atty Larry Gadon.”

But Gadon just doesn’t care. “Only the yellow lawyers are saying that. Even big name lawyers are congratulating me. But, for me, Hilbay – he’s a mediocre lawyer.”

If what they’re doing is indeed public service, Rappler asked, why are Gadon and the VACC lawyers not involved in the cases of victims of police killings, especially now since the war on drugs has evolved into a legal battle.

VACC said their focus for now is corruption, and took a swipe at the legal groups on the forefront of challenging the drug war: “Bakit puro leftist and nire-represent nila (Why do they represent only the leftists)?”

(I don’t believe there are EJKs. Those killings are perpetrated by drug syndicates. Drug personalities are lucky because if I were President, I would have killed more. I would kill more if I were president. Digong is even soft.) For the so-called impeachers, the process is a political one, more than anything else.

And so, if it’s a political process, some analysts see that politics will be on Sereno’s side if the trial goes to the Senate. She will presumably have the votes of the minority and brothers in the Christian faith. Her lawyer, Alex Poblador, was the same lawyer for Grace Poe in the SC petition that she won. There are also the swing votes.

But Gadon doesn’t believe any of this, convinced of his victory.

The politics of it is something that the VACC couldn’t have a full grasp of just yet in its bid to impeach Morales, as its search for an endorser continues. While it does that, its counsel, Gadon, is out to secure more smoking guns against Sereno.