DAVAO CITY, Philippines – Thousands of Iglesia ni Cristo members occupied the Agro Soccer Field, spilling over to the Quimpo Boulevard and Bolton Bridge on Tuesday, February 28, for a prayer rally that coincided with similar activities in Manila and other key cities nationwide.

Abelino Beraque, 62, from Banay-banay, Davao Oriental said that he was willing to sacrifice everything for a rare opportunity to express their unity under the INC.

“We would definitely do anything to join the evangelical mission today because our leaders called for us to participate in this big event. This is a manifestation that in our church we live as one body,” said Beraque.

Beraque, an INC member for more than 20 years, said that he is committed to INC because this is where he saw salvation. “We read in the Bible that no other religion will be saved. Only those who believe and are members of the Iglesia Ni Cristo will see salvation,” Baraque said.

Despite the drizzle, the INC faithful stayed in the soccer field to listen.

Some children were reported missing while a few people fainted and were rushed out in stretchers.

Many commuters were stranded. – Rappler.com 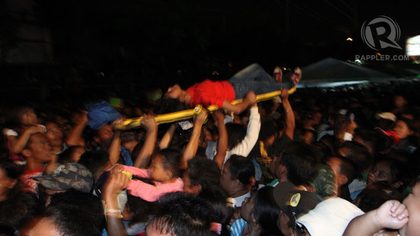