Dec 15, 2017 9:35 PM PHT
Tina Ganzon-Ozaeta
Facebook Twitter Copy URL
Copied
The mayors – from the provinces of Quezon, Laguna, and Batangas – are accused of involvement in the illegal drugs trade 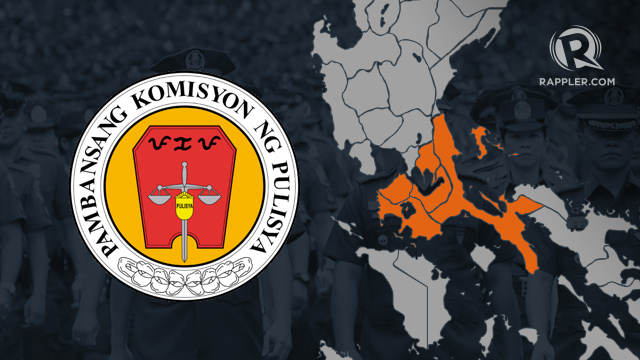 BATANGAS, Philippines – The National Police Commission (Napolcom) released on Friday, December 15, a new list of local chief executives in Calabarzon who had been stripped of their powers over the local police.

Toreja is one of 3 local chief executives in Batangas stripped of their powers over cops following the order served to Tanauan City Mayor Antonio Halili and Lemery Mayor Eulalio Alilio in November.

Toreja said there is no ounce of truth to the allegation that he is involved in the illegal drug trade.

“It is quite lamentable and unfortunate that the Napolcom indicted me as engaged in an illegal activity without valid and credible proof. More importantly, it was done in violation of my rights to due process. I have been unjustly accused and judgement was passed against me without having been informed that a complaint of such nature ever existed. And, more so, my powers, duties, and obligations as a Napolcom deputy have been suspended in violation of its own Rules of Procedure,” he said.

Toreja said since he began serving as Ibaan mayor in 2011, he had relentlessly pursued and supported programs and activities against any and all forms of illegal drug trade.

“I have been fully supportive of President Rodrigo Roa Duterte’s war on drugs, which war has been embraced by our people under my administration and leadership,” he said.

On Friday a manifesto was signed by over 100 leaders of various civil society organizations, non-governmental organizations, and other local government workers of the municipality of Ibaan, declaring their trust and confidence in the integrity, character, person, and leadership of Toreja.

“We therefore strongly urge the board of Napolcom and it’s leadership to reconsider and set aside the same resolution and restore Mayor Toreja to his previous status,” the manifesto read. – Rappler.com