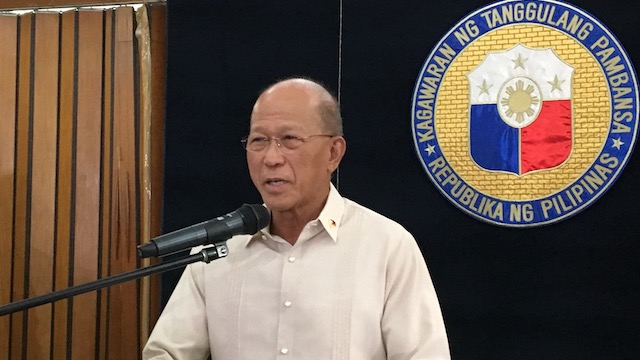 MANILA, Philippines – Defense Secretary Delfin Lorenzana confirmed reports that Philippine Navy chief Vice Admiral Ronald Mercado was relieved because of a disagreement on how to implement a P15.5-billion project to acquire two modern warships or frigates for the navy.

“As the Secretary of Defense, I have lost trust and confidence in his integrity and leadership. I question his intention behind his fixation with one specific company for the combat management system (CMS) of the frigate acquisition project,” Lorenzana said in a press briefing on Wednesday, December 20.

Secretary Lorenzana says he lost confidence in relieved Navy chief VAdm Mercado after he insisted on a particular supplier for navy’s P15.5-B warships despite Lorenzana’s rejection of the recommendation. Sources sympathetic to Mercado said he was pressing for better technology pic.twitter.com/jDBMIndOsy

Mercado’s relief shocked the military hierarchy. A change of command ceremony was hastily held a day before the military celebrated its founding anniversary on December 20. President Rodrigo Duterte is the guest of honor.

Hyundai Heavy Industries won the multi-billion-peso bid to build the warships, but another supplier will be installing the combat management system. Lorenzana said Mercado disapproved of the supplier that Hyundai wanted to tap.

The Department of National Defense (DND) bids and awards committee (BAC) took the side of the builder, arguing that the navy cannot impose a particular supplier to the builder.

The BAC conducts the bidding for the navy, which is the end user of the project.

But sources sympathetic to the navy chief said he wanted to make sure the specifications for the warships are followed. The warships are supposed to become the most capable warships of the ill-equipped Philippine Navy.

Lorenzana said the DND has the option not to receive the ships if it turns out that they do not conform to the specifications by the navy.

Mercado is not being accused of corruption. Lorenzana said there is also no investigation against him.

“I didn’t want to remove him but the team (BAC) was alarmed because the project was already delayed by 4 months. They were the ones who really recommended to relieve Vice Admiral Mercado,” said Lorenzana.

Lorenzana said he didn’t like how Mercado went around “forum shopping” to insist on what he wanted, supposedly even threatening to rescind the contract if he was not followed.

The navy chief is a presidential appointee. Lorenzana ordered Mercado’s relief but he said it was approved by Duterte. – Rappler.com