Dec 27, 2017 4:23 PM PHT
Bea Cupin
Facebook Twitter Copy URL
Copied
Grants for monitoring expenses at the MTRCB, as well the ERC's use of income to augment operational expenses, are vetoed 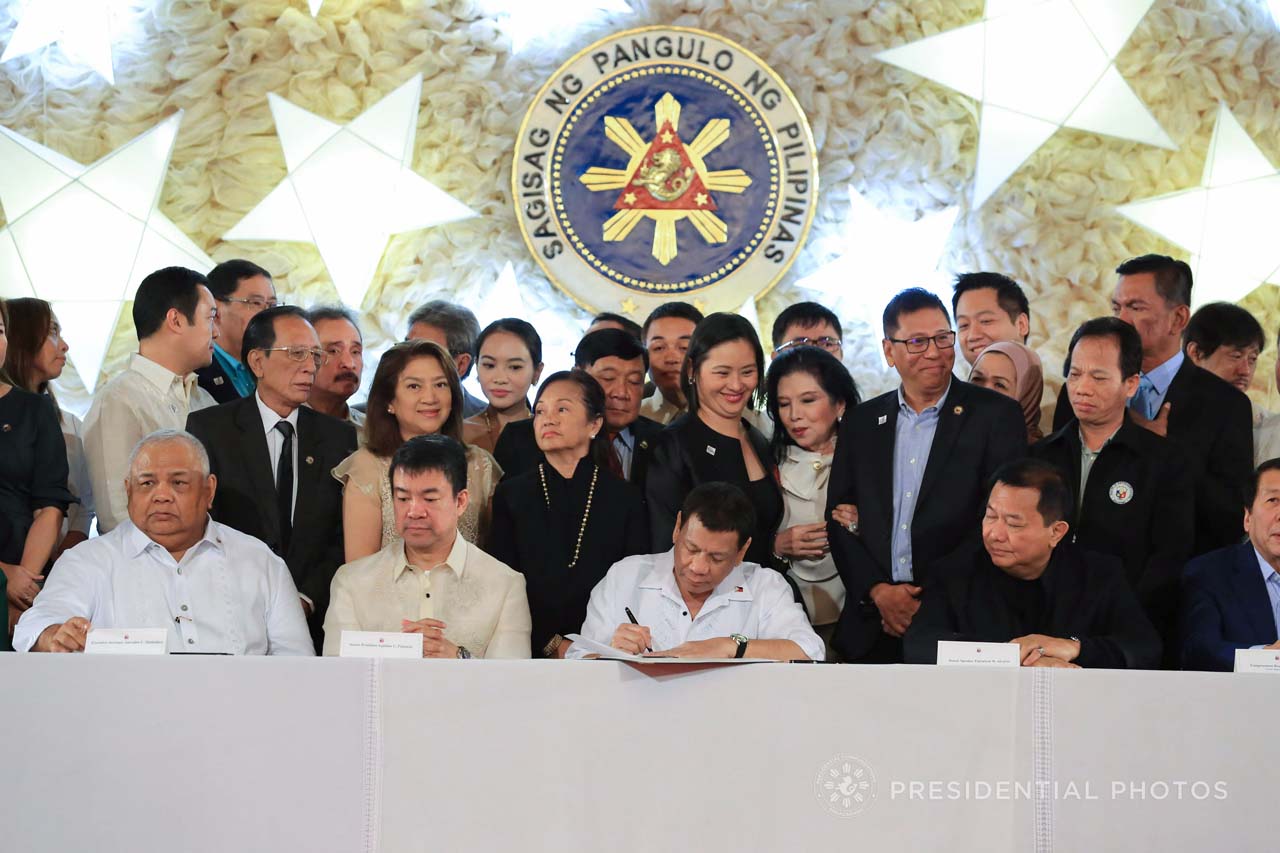 MANILA, Philippines – President Rodrigo Duterte ruled out “attempts to circumvent the Constitution” in the 2018 budget by using his power of direct veto on provisions in the 2018 budget “which do not relate to some particular appropriation and introduced… with the purpose of amending existing laws and rules.”

These vetoes, which Duterte made in signing the P3.8 trillion 2018 budget into law, include the grant of monitoring expenses to the Other Executive Offices of the Movie Television Review and Classification Board (MTRCB). In his message to Congress, the President pointed out that board members also get honoraria and per diems in doing their official functions.

Duterte said expenses made in monitoring and evaluating may be allowed so long as they are subject to budgeting, accounting and auditing laws. (READ: What’s the share of gov’t offices in the 2018 P3.8-T national budget?)

The President also directly vetoed a provision which allows the Department of Education (DepEd) of use funds meant for Maintenance and Other Operating Requirements (MOOE) for capital outlay needs.

Duterte vetoed a provision that allows the Energy Regulatory Commission (ERC) to tap its income in augmenting its operational requirements.

“The sources of income have already been included in the non-tax revenue program… thereby resulting in double programming for the said income sources,” he said.

Instead, the commission must make use of its budget, amounting to P413.6 million for 2018. The House of Representatives had earlier slashed the ERC budget to a mere P1,000 when it passed the budget on 3rd and final reading.

The Department of Science and Technology and the Dangerous Drug Board’s double programming sources. “The creation of a revolving fund for the Research and Development Institutes of the DOST and the use of collections by the DDB are therefore subject to generation of income and collections in excess of those forming part of the revenue sources programmed for the [budget],” said Duterte.

“GAA as the Allotment Order.”

Proper use of funds. Again emphasizing the important of a one-year validity for allocations made in the 2018 budget, Duterte placed budgetary support for Government-owned or -controlled Corporations (GOCCs) under conditional implementation. Subsidies from government will be effective until December 31, 2018. Unused funds will be returned to the unappropriated surplus of the General Fund.

Duterte likewise called on the Supreme Court to make sure courts get the funds they need right away, since the direct provision of their MOOEs is part of the budget.

The DepEd’s P22.8 billion special provision for MOOEs may be used for other purposes, so long as it is justified and as long as it complies with existing rules in allotment modification.

Duterte also ordered the Commission on Higher Education (CHED) to coordinate with the Department of Health (DOH) in implementing cash grants to qualified medical students.

Duterte allowed the Bureau of Immigration (BI) to tap money from its express lane fees and charges to be used as a “trust fund” for the salaries and overtime pay of its employees. The President said they would be in effect until Congress passed a new Immigration Modernization Law, that would improve the compensation system of the bureau.

For the country’s health safety nets, Duterte placed the release of government support for the supplemental Philippine Health Insurance Corporation (PhilHealth) benefits, pending the full utilization of over P3.5 billion for the expanded PhilHealth benefits under the miscellaneous personnel benefits fund.

He also emphasized that the government’s funding of the National Health Insurance Program (NHIP) covers only insurance premiums and will not be used to reimburse the cost of health insurance itself. This will be the role of PhilHealth.

Read the rest of Duterte’s message to the Philippine Congress here:

Duterte’s budget action message was penned on December 19 but officially sent to both Houses of Congress – the Senate and House – on December 27, 2017. – Rappler.com