MANILA, Philippines – Senator Sherwin Gatchalian said he got pissed from netizens who kept criticizing him on Twitter.

“Daming nang-iinis eh. (There were a lot of annoying [people]),” he told Rappler when he was asked via Viber on Tuesday, January 2, what caused his meltdown.

On New Year’s Eve, December 31, Gatchalian responded to Rappler CEO and Executive Editor Maria Ressa’s article post about the Liberal Party with his comment:  “The nation already lost its soul in the last 6 years.” 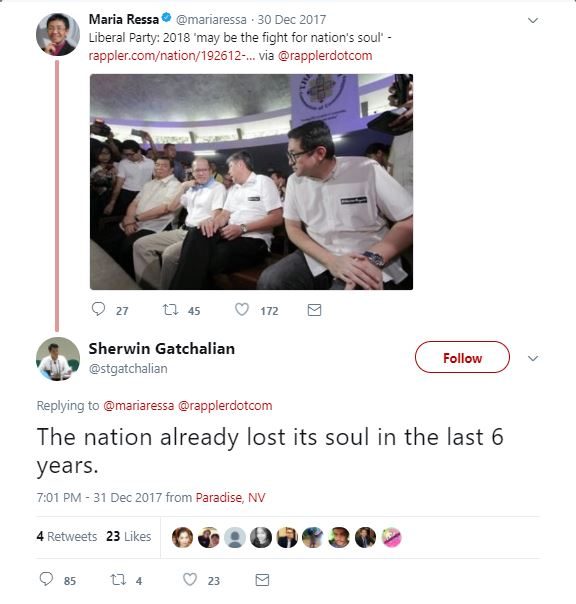 Netizens were quick to remind Gatchalian of his earlier tweets “supporting” the Aquino administration and slammed him for being “balimbing” (political turncoat) and “trapo” (traditional politician).

The tweets irked Gatchalian which led him to reply “Gago ka! (You’re stupid)” and “Ulol (deranged)”. He also asked a netizen who posted screenshots of his tweets what year it was posted, “Gago! Anong year yan? (Stupid! What year was that?)”

Netizens slammed the senator for his choice of language and reminded him that these were the people that he served.– with a report from Camille Elemia/Rappler.com