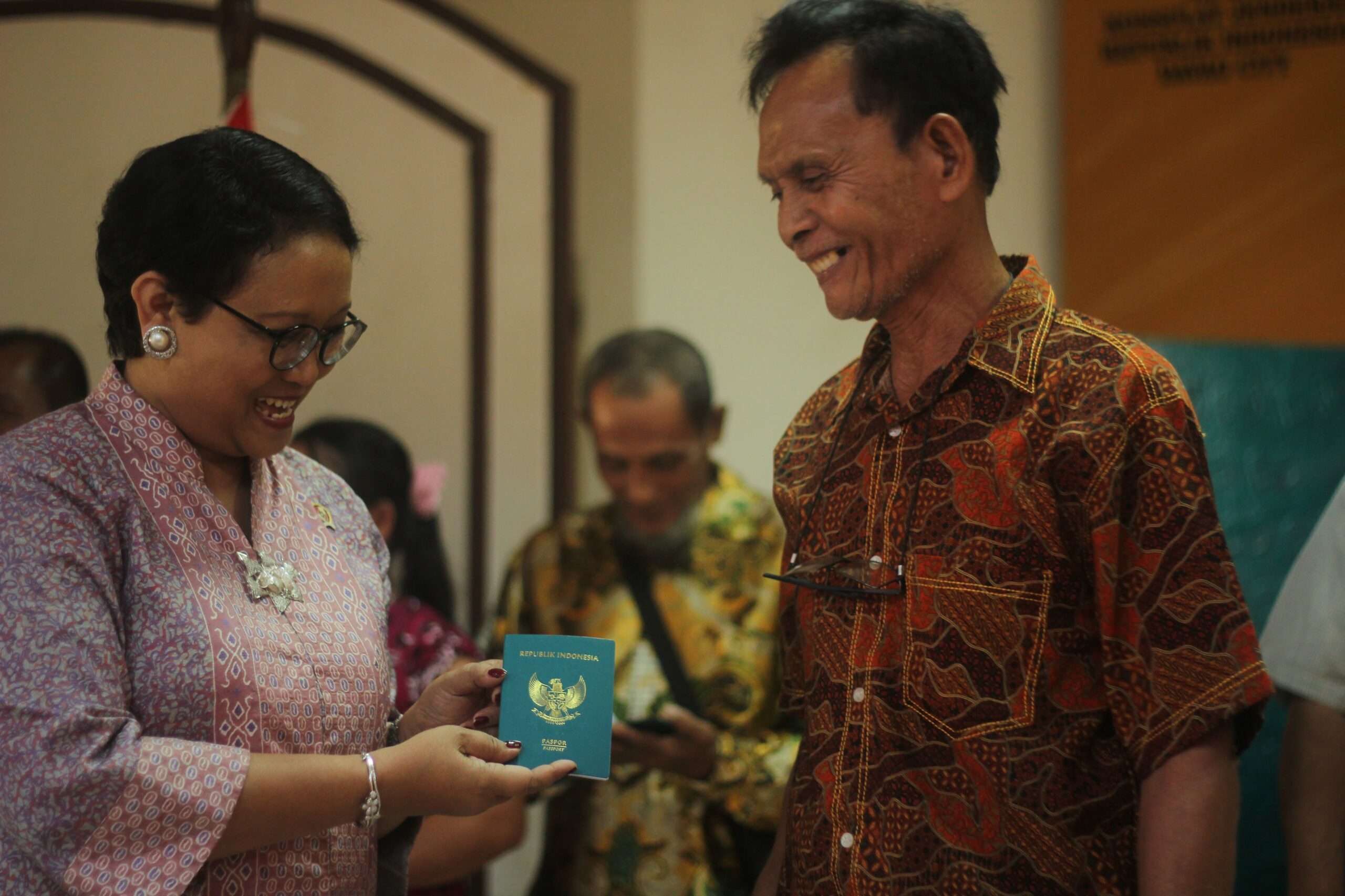 DAVAO CITY, Philippines – They call him Pilipino, not for his roots, but simply because it’s what his parents named him.

But make no mistake, Pilipino Mahare Lahindo is an Indonesian, and this time a new document proves that he’s one.

On Wednesday, January 3, Lahindo received his turquoise green passport which bears Indonesia’s coat of arms and which had just been issued by the Consulate General of the Republic of Indonesia in Davao City (KJRI).

On his passport, his nationality reads: Indonesian.

Lahindo, who’s turning 67 in February, easily became the center of attention here Wednesday, when Indonesian Foreign Minister Retno Marsudi handed over passports to people previously classified as at risk of being stateless in the Philippines.

The bursts of laughter and applause flooded the House of Indonesia, which earlier was filled with nostalgia.

Marsudi led the symbolic conferrment of passport to some 20 persons of Indonesian descent (PIDs) living in Mindanao. KJRI has yet to print the remaining 292 passports for people recently identified as bonafide Indonesian citizens.

Since November 2017 Indonesia, along with the Republic of the Philippines and the United Nations High Commissioner for Refugees (UNHCR), have distributed hundreds of birth certificates to the PIDs in several provinces in Mindanao.

A total of 1,937 were determined to be Indonesians. (READ: Indonesia offers repatriation for ‘newfound’ citizens in the Philippines)

For Indonesians like Lahindo, a passport, on top of a birth certificate, will finally give him the right to cross legal borders, such airports, at the same time prove to people that Pilipino is but a name.

Lahindo, an Indonesian Sangir, was born in Glan, a municipality in Sarangani province facing the Sulawesi (Celebes) Sea, the “martime bridge” that connected thousands of other PIDs to North Sulawesi, an Indonesian province comprised of islands, some of them reachable from Mindanao through small fishing vessels.

The Indonesian Sangirs in the Philippines keep ties with North Sulawesi as many of them have relatives on the other part of the border.

Thus, for the past few decades, both the Philippines and Indonesia allowed these people to criss-cross the Sulawesi Sea through a border crossing agreement.

But back in the Philippines, the Sangirs have had a tough life, often subjected to discrimination as many of them did not have papers to prove they were rightful residents of the republic.

As a new chapter awaits the lives of Lahindo and many others, their home country hopes they are now on a better footing with Filipinos in communities where they live.

Indonesia, the Philippines, and the UNHCR have strengthened their efforts since 2011 to save thousands of PIDs in the country from running the risks of being stateless.

By 2014, they were able to register 8,745 PIDs who had been living here for decades, according to Marsudi.

Wednesday marked a milestone for Indonesia to hand over passports to PIDs in the Philippines. It was the first time the neighboring state had done so after more than 60 years of keeping cordial ties with the country.

In 2017, Marsudi, along with Indonesian President Joko Widodo, did the same in Malaysia.

“But this issue (Philippines) is more complicated,” she told reporters after the event.

The PIDs like Lahindo agree. To be a recognized as an Indonesian, despite being born and raised in the Philippines, was a matter that often perplexed authorities here.

What’s clear for now is that hundreds of “newfound” Indonesians can rightly call themselves so. After all, they now have birth certificates, and passports, to prove they’re citizens of a country that gave them right to call it their “tanah air” or motherland.