Facebook Twitter Copy URL
Copied
She gets a disapproval rating of 26% and a distrust rating of 33% in the survey conducted from December 10-15 and December 17, 2017

She got a disapproval rating of 26% and a distrust rating of 33% in the survey conducted from December 10-15, and December 17, 2017 – the same time when the House of Representatives was hearing the impeachment complaint against her.

The percentage of those ambivalent toward her performance and trustworthiness were, in fact, higher than those who either viewed these positively or negatively.

Sereno got the biggest distrust and disapproval ratings among the ABC class at 38% and 30%, respectively.

Most people in class E were undecided about their perception towards the top magistrate. (READ: Sereno impeachment: Summary of the Chief Justice’s earnings, expenses)

House Speaker Pantaleon Alvarez saw almost equal figures for those who approved of his performance and trusted him, and those who were undecided. 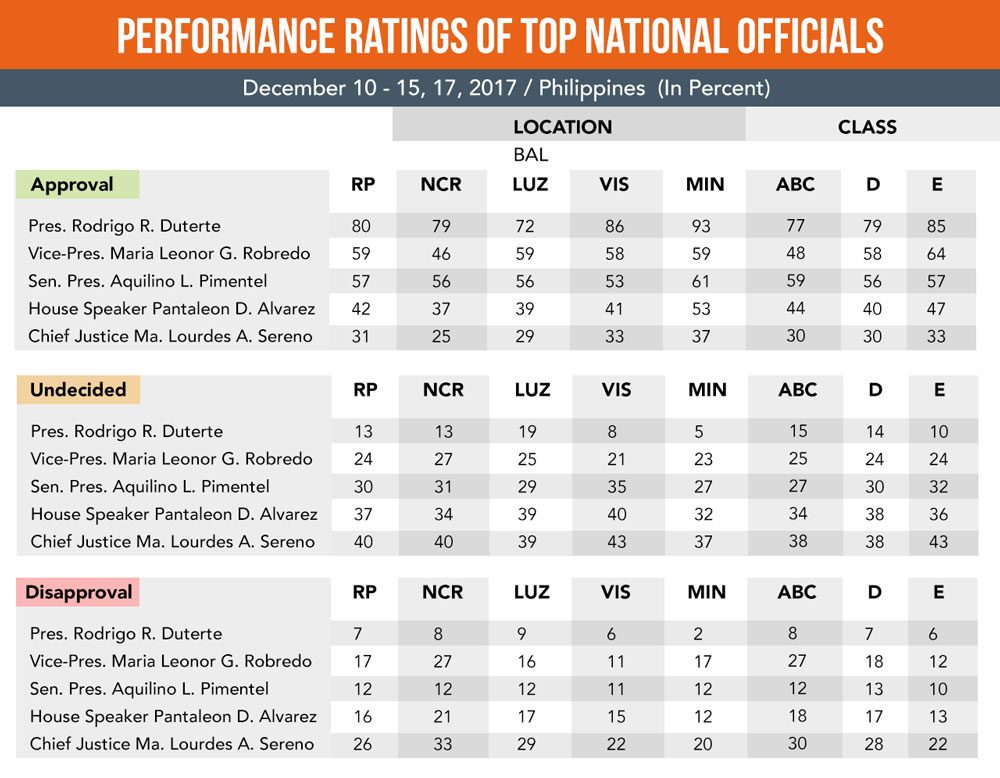 Of the 3 key government institutions, the Senate had the highest approval rating, followed by the House of Representatives and the SC.

The 3 offices got the approval ratings of 55%, 50%, and 48%, respectively. The highest rating recorded was in Mindanao where the Senate got an approval rating of 60%. The House and the SC both got 57% in the southern area.

Among the institutions, the SC, too, had the highest disapproval rating at 15% and distrust rating at 16%.

Appreciation and trust in the institutions were almost at the same level across all socioeconomic classes. Among the ABC classes, however, the SC had the most disapproval and distrust.

A quarter of the sector did not approve of the SC’s performance while 26% said they did not trust the High Court.

Despite lawmakers’ occasional maneuverings, more people across classes A to E approved and trusted the House more than the SC.