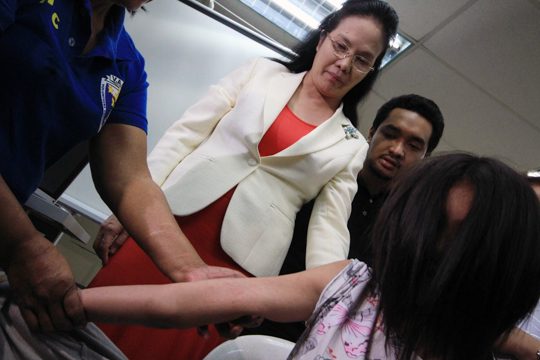 PAO is set to open a new investigation into a child who died in Malolos, after getting vaccinated with dengue vaccine Dengvaxia, now recalled after manufacturer Sanofi Pasteur disclosed it could lead to severe dengue symptoms for children who have not had dengue before but got the vaccine.

The records of the child in Malolos say that the antecedent cause of death is severe dengue syndrome, said Acosta.

They will do this and their succeeding investigations without the participation of UP-PGH experts, despite the call of the Department of Health (DOH) to include them.

“The DOH is the problem here, so why would we tap experts linked to the DOH?” Acosta said.

The DOH has tapped UP-PGH to conduct an independent review on the reported deaths. Health Secretary Francisco Duque III said the expert panel would be composed of pediatricians, pathologists, and other specialists with “no financial or intellectual ties” to Sanofi Pasteur, the manufacturer of Dengvaxia.

Acosta said their team, led by their forensics head Erwin Erfe, has enough experts in it. They include Tony Leachon, expert in internal medicine; Angelo Ramos, PAO’s consulting forensic medical officer and an expert in public health; Clar Cairo, president of DOH employees’ union and who has experience with the DOH’s Disease Prevention and Control Bureau; and Francis Cruz.

“We have many other volunteer pathologists to be disclosed later in the proper forum, for security reasons,” Acosta said.

DOH said they will not conceal anything and is just making sure that any findings they announce will be very scientific.

Sanofi Pasteur Philippine medical director Ruby Dizon earlier said that “all adverse events are reported to the DOH and is assessed independently by the National Adverse Event Following Immunization Committee.”

“All events as of today that we know of are not related to dengue vaccination,” Dizon earlier said.

But Acosta slammed all these as the DOH being in denial. She alleges that they can already see a ‘pattern.’

“There is bleeding in the lungs, heart, brain and there is enlargement in the kidney and liver, they are filled with water and blood. Those are signs of the dengue severe syndrome,” Acosta said.

PAO’s Erfe said in a press conference on Monday that the said findings were similar with Anjielica Pestilos, 10, Zandro Colite, 11, and Lenard Baldonado, 10, who all died within six months of getting Dengvaxia.

Erfe said they have initially counted 19 children whose deaths were allegedly caused by Dengvaxia.

PAO is fulfilling an order from Justice Secretary Vitaliano Aguirre II to investigate deaths of children who were vaccinated with Dengvaxia. The National Bureau of Investigation (NBI) is also conducting a probe on the alleged corruption side.

DOH, on the other hand, said they will not be filing cases, and will instead focus on ensuring children’s safety.

PAO has set up a Help Desk to families who want legal assistance. Their frontliners are personnel from the Volunteers Against Crime and Corruption, who coordinate with families before referring them to PAO.

To those who would want to get in touch with PAO, you may call their hotline 929-9436. – Rappler.com