DOH to ‘complement efforts’ of VACC in its Dengvaxia probe – Duque 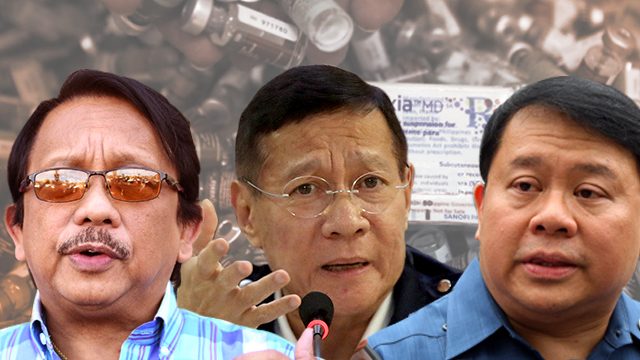 Facebook Twitter Copy URL
Copied
Health Secretary Francisco Duque III says DOH 'cannot and will never obstruct' the efforts of the VACC and the PAO, and promises to provide them with the necessary DOH documents

MANILA, Philippines – Health Secretary Francisco Duque III said they would provide all documents needed by the Volunteers Against Crime and Corruption (VACC) as it builds its case against officials who implemented the now-suspended dengue vaccination program.

Duque said he met with VACC on Tuesday, January 9 to “complement our efforts, but insofar as providing documents and factual information are concerned.”

“We already told them we would be very happy to cooperate with them because the objective of ferreting out the truth is the paramount consideration. Our doors are open,” Duque told Rappler in a phone call.

Less than two years later, Sanofi announced Dengvaxia may lead a person to develop severe dengue if he or she had not been infected by the virus prior immunization.

Duque immediately suspended the program, but not before 873,000 kids were injected with the risky vaccine.

This sparked congressional probes both in the Senate and the House of Representatives, with parents now worried about the health of their vaccinated children.

VACC is currently working with the Public Attorney’s Office (PAO) on a forensic examination and the exhumation of the bodies of kids vaccinated with Dengvaxia.

The PAO and VACC are doing the investigation independently from the University of the Philippines-Philippine General Hospital, which the DOH has tapped to review another 14 cases of deaths of children who had received Dengvaxia.

But Duque said the DOH will not interfere with this probe and even offered to help PAO and VACC. (READ: DOH won’t file cases over Dengvaxia issue, will focus on kids’ safety)

“If they have a request to us, we would help them. Everything, we’re open. We cannot and we will never obstruct their efforts,” said Duque.

After their meeting, Topacio described the DOH chief as “very helpful and very cooperative.”

“I think he is also strongly interested in getting to the root of the matter not just in retrospect of Dengvaxia, but also the DOH mafia,” said Topacio, referring to DOH officials who had worked under Garin and who continue to be part of the DOH today.

Duque said he will look into the VACC’s allegations against these DOH officials, but clarified due process must be followed. – Rappler.com