Aguirre orders probe into alleged sale of firearms to NPA 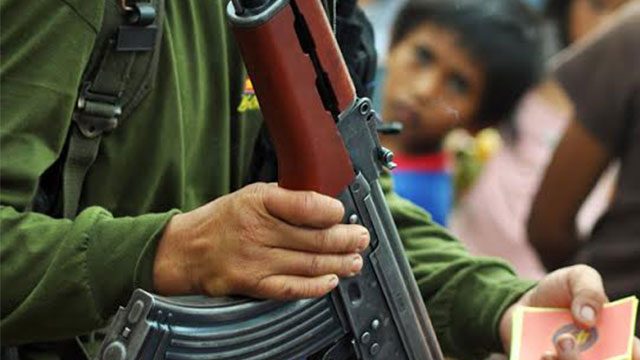 MANILA, Philippines – Adding to the list of reinvestigations being conducted by the Duterte government is a probe into an issue dating back from 2014 when firearms were allegedly sold to the communist rebel group, New People’s Army (NPA).

The day after a cabinet meeting at the Malacañang Palace on Monday, January 8, Justice Secretary Vitaliano Aguirre II issued a department order authorizing the National Bureau of Investigation (NBI) to begin a case buildup over the alleged anomaly.

In a statement issued Tuesday, January 9, Aguirre said he was “acting on the directive of President Duterte to investigate the reported missing 1,004 Philippine National Police firearms which were discovered to have been sold to the members of the New People’s Army (NPA) in Mindanao.”

In 2014, a PNP Criminal Investigation and Detection Group (CIDG) report said  1,004 AK-47s were missing and some had may have ended up in the hands of the NPA.

The police probe also said it was an authorized firearms dealer by the name of Isidro Lozada who had supposedly purchased the firearms and sold these to the NPA, as he was under pressure to do so.

Licenses for firearms are always coursed through the PNP-Firearms and Explosives Office (FEO). The report questioned why it slipped through the scrutiny of the FEO.

But they are on trial for the anomalous process of issuing and obtaining licenses for 19 AK-47s. The charge sheets did not mention the NPA. (READ: 45 AK47s recovered from NPA in Mindanao)

Asked if this was the same case, Justice Undersecretary Erickson Balmes was not quite sure at first. He eventually confirmed the new investigation is an “offshoot of the earlier case.”

Told that Lozada, a private individual, is already a respondent, Balmes said the NBI case buildup will determine if there are more.

Asked if the President is not satisfied with the investigation done during the Aquino administration, Balmes simply said that it was what was discussed during the cabinet meeting.

When he won as President in May 2016, Duterte said he was studying the idea of disallowing licenses for heavy firearms as these were sometimes sold to the NPA.

This comes as Duterte formally terminated peace talks with the communists, and moved for the classification of NPA as terrorists.

Aside from this issue, other cases from the previous administration that are being reinvestigated by Aguirre’s DOJ are the pork barrel scam and the Disbursement Acceleration Program or DAP. – Rappler.com