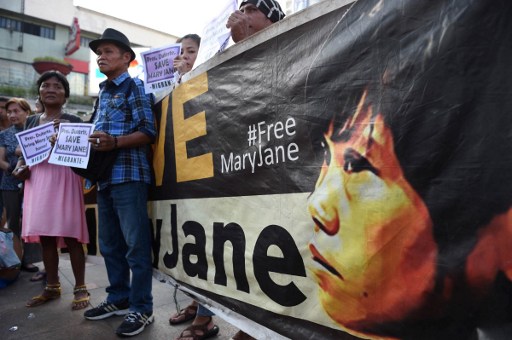 MANILA, Philippines – On her 33rd birthday, detained overseas Filipino worker (OFW) Mary Jane Veloso has one wish – for the Philippine court to hear her testimony against her traffickers.

The recorded message presented to the media on Wednesday, January 10, was addressed to President Rodrigo Duterte.

(President Duterte, I wholeheartedly ask for your help to allow me to testify in the case against Cristian Sergio there in the Philippines to reveal the truth and punish the real culprit.)

(President Duterte, my life is in your hands. I am not losing hope that I will attain justice because God is with me in this fight. I will never admit a crime I did not commit.)

Veloso was trafficked to Indonesia to work when she was arrested after authorities found drugs inside her suitcase. The young mother of two was placed on death row but was saved in the 11th hour following a viral petition to spare her life.

Cases were filed against her traffickers Sergio and Lacanilao at the Regional Trial Court in Nueva Ecija in April 2015.

Since Veloso will not be able to testify, her party filed a motion to take her written testimony answering the court’s pre-drafted set of questions to serve as her interrogation.

The accused filed a motion opposing the complainant’s request, saying that it violates their constitutional right since she will not be personally confronted and cross-examined.

After the accused party’s motion for reconsideration was denied, they escalated the case to the Court of Appeals (CA). The appellate court on December 13, 2017 granted the motion, arguing that the lower court committed a grave abuse of discretion.

“Deposition in Indonesia jail, therefore, is the only available, allowable and practicable mode to officially get Mary Jane’s testimony as she is in jail on death row,” said Migrante in a statement.

“Here, once again we unite and amplify our voices for Mary Jane. We are calling on the Philippine Court of Appeals and other judicial and political authorities to allow her to testify in Indonesia. We are urging President Duterte to do everything in his power to let Mary Jane speak the truth,” they also said.

Rey Cortez of the National Union of People’s Lawyer said that a motion for reconsideration will be filed by the Office of Solicitor General in the CA. Bringing the issue to the Supreme Court is also eyed. – Rappler.com