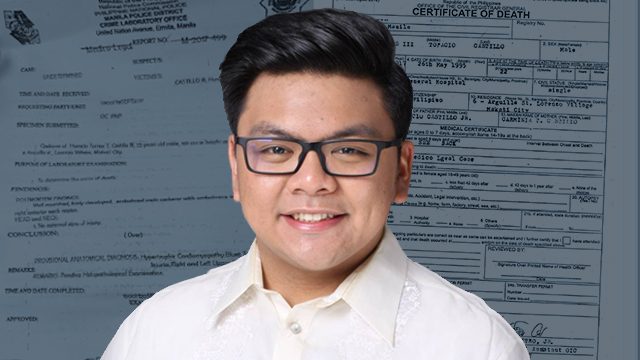 MANILA, Philippines – Hearings ended last year and the case was originally set for resolution, but the Department of Justice (DOJ) panel of prosecutors decided to reopen the preliminary investigation into the hazing death of University of Santo Toma (UST) freshman law student Horacio “Atio” Castillo III.

The reopening of the investigation is due to the sensational affidavit of suspect-turned-witness Marc Anthony Ventura, where he names the members of Aegis Juris fraternity who carried out the fatal hazing rites on Castillo.

The affidavit was not taken into consideration in the earlier investigations, because the panel had not received it yet at the time. The panel received the affidavit only on January 3 this year.

“In the interest of justice and in observance of due process, the Panel hereby motu propio reopens the preliminary investigation of these complaints in order to give them the opportunity to submit their countervailing evidence,” said the order issued by the panel composed of Assistant State Prosecutor Susan Villanueva, Prosecution Attorneys Wendell Bendoval and Honey Rose Delgado.

This comes as good news for the Castillo family because Ventura is the only fraternity member to admit to the hazing that he participated in. Before Ventura, fratman John Paul Solano detailed what he knew, but later led the defense strategy of pointing to Castillo’s alleged pre-existing heart condition as cause of death. (READ: What different documents say on Atio Castillo’s cause of death)

“As I understand they are already accepting the testimony of Ventura as part of the evidence, strengthening our case against the many respondents in our anti-hazing complaints,” Castillo’s mother Carmina said.

She added: “This breakthrough can definitely speed up the case when filed in the proper courts. They cannot deny the fact that a crime was committed and there is a vital witness to the crime.”

Mrs Castillo said she will be attending the hearing, which will be held on Friday, January 12.

The DOJ will resolve complaints of murder, anti-hazing law violation, perjury, and obstruction of justice.

Ventura has been admitted to the DOJ-run Witness Protection Program (WPP). He executed his affidavit as early as October 24, 2017.

Ventura’s supposed deadline to submit this affidavit to the panel was October 30. When he failed to do so on that date, the panel said they considered Ventura’s right to submit an affidavit waived.

This is expected to be the argument of the defense come January 12. They argued this way once before. Paris Real, the lawyer for one of the suspects Alex Bose, earlier said that Ventura’s admission makes him the most guilty, which disqualifies him from being a witness. It will be the court who will decide whether Ventura will become state witness. (READ: Who is Aegis Juris’ Big Brother? Not me, says Divina)

In his 6-page affidavit, a copy of which was recently obtained by Rappler, Ventura admitted to participating in the hazing rites on September 17, but only during the time they were hitting Castillo’s arms with a spatula to try and calm the swelling.

Before this, Castllo was beaten back and blue by punching. “Susuntukin hanggang tumigas o pumutok ang braso (He was supposed to be punched until his arm muscles hardened or swelled),” was how Ventura described it.

Ventura said those who punched Castillo were Zach Abulencia, Daniel Ragos, Sam Cagalingan, Alex Cairo, Luis Kapulong, Edric Pilapil, and others he couldn’t remember because the lights were off at the time.

Ventura said he did the spatula round with the same people above with the exception of Kapulong, and the addition of Miguel Salamat, Robin Ramos, Mhin Wei Chan, Oliver Onofre, Marcelino Bagtang, Hans Rodrigo, Ralph Trangia, Joriel Macabali, Grand Praefectus or GP Arvin Balag, and Master Initiator or M.I. Axel Hipe.

The final stage, or the paddling, was done by Hipe, Trangia, Balag, and a new brother whom Ventura said he could not recall. According to Ventura, Hipe hit the first paddle, followed by Trangia, then by Balag. On the 3rd paddle by Balag, Castillo went down on his knees.

Castillo was given time to rest, and that’s when the unidentified brother hit him a 4th time with a paddle. Balag then hit him a 5th time, and that’s when Castillo collapsed, unable to speak, but sill making sounds, Ventura said.

Ventura said that at that point, it was Balag who was calling the shots, including the decision not to immediately take Castillo to the hospital for fear that whoever takes him there will be held for questioning. (READ: The different angles in Atio Castillo’s hazing case)

After a few minutes, Ventura said Balag finally agreed to take Castillo to the hospital. Castillo was already loaded into Trangia’s red pickup when Balag arrived and ordered them to take Castillo back to the frat library on Laong Laan street in Sampaloc, Manila where the rites were held.

That’s when Solano, a medical technologist, arrived at the library in his motorcycle, and tried to revive Castillo. Ventura said it was when Solano said Castillo’s pulse was already “borderline” that Castillo was finally taken to the hospital.

Ventura said Solano suggested to take Castillo to the trauma center of the Jose Reyes Memorial Medical Center (JRMMC), a few minutes by car from the library. The nearest would have been the University of Santo Tomas (UST) hospital which was just across the road.

Castillo ended up being taken to the Chinese General Hospital, a few minutes farther than JRMMC. He was declared dead on arrival.

Before the hearings concluded, Solano, Hipe, and Chan submitted affidavits of their respective medical expert witnesses who said that Castillo died from a pre-existing heart condition.

The Manila Police District has two versions of medico-legal reports, the former indicating a heart condition, and the latter conclusively saying that Castillo died of severe blunt traumatic injuries.

Aside from Ventura and Solano, all the respondents remain mum about the hazing rites. They are adopting the legal strategy of invoking their rights to privacy and other procedures. Balag’s defense is that murder, or the elements of it, cannot be proven without a witness.

Balag’s possible attendance on Friday is something to watch out for, as he was already released by the Senate after two months in detention for contempt. – Rappler.com