Jan 11, 2018 5:19 PM PHT
Agence France-Presse
Facebook Twitter Copy URL
Copied
According to Hagit Ofran of the Peace Now NGO, the majority of the approvals are for settlements deep in the West Bank that Israel would likely need to evacuate as part of a two-state solution to the Israeli-Palestinian conflict 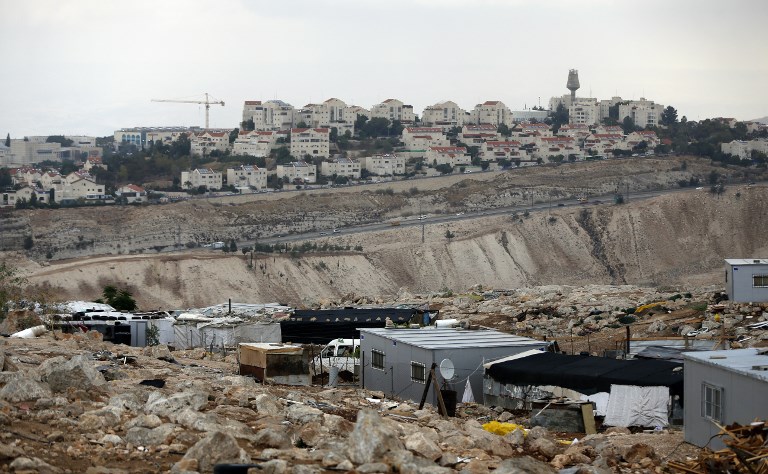 JERUSALEM – Israeli authorities have approved more than 1,100 new settlement homes in the occupied West Bank, the Peace Now NGO said Thursday, January 11, the latest in a raft of such moves in recent months.

The approvals were given on Wednesday by a defense ministry committee with authority over settlement construction.

Some 352 of the homes received final approval, while the others are at an earlier stage in the process, Hagit Ofran of Peace Now, which monitors settlement building, told the Agence France-Presse.

A total of 1,122 housing units were advanced, including 7 already existing homes given retroactive approval.

According to Ofran, the majority of the approvals are for settlements deep in the West Bank that Israel would likely need to evacuate as part of a two-state solution to the Israeli-Palestinian conflict.

“It’s a part of the general trend that the government is doing, which is to build all over the West Bank, even more in places that Israel would need to evict, and in this way to torpedo the possibility for a two-state solution,” she said.

A shooting that killed an Israeli settler on Tuesday in the West Bank led to fresh calls for further settlement building, though the plans approved on Wednesday were already in the works.

According to Peace Now, 6,742 housing projects were approved in the settlements last year, the highest figure since 2013.

Israeli settlements are seen as illegal under international law and major obstacles to peace as they are built on land the Palestinians see as part of their future state.

Israel faced sharp criticism from the administration of former US president Barack Obama over settlement construction, but that has not been the case with US President Donald Trump’s White House and Israeli officials have sought to take advantage of his backing. – Rappler.com