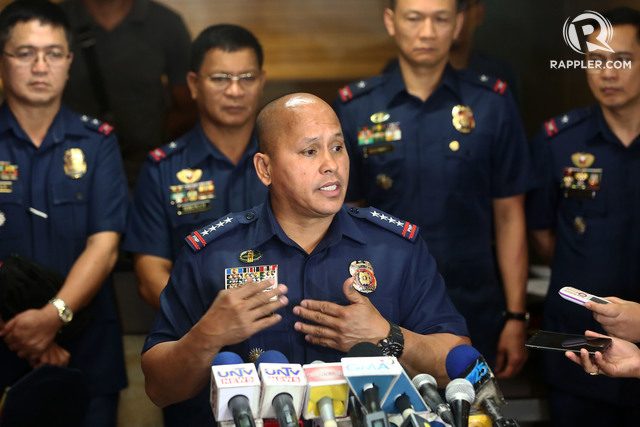 So when it was time for his last new year’s call before he retires, he called on cops to always strive to be better and to avoid repeating mistakes.

(My fellow officers, let us not put to waste what we have started. Let us show once more to the Filipino people that their law enforcers continue serve them loyally….Let us bring back the good image of the PNP.)

“Let us seek ways to serve better. Let us not repeat the mistakes of the past. Let us serve and protect the community and cleanse our ranks without fear or favor,” Dela Rosa said.

This is supposed to be Dela Rosa’s final new year’s call as PNP chief. He hits 56 – the mandatory age of retirement – on January 21, but was extended to serve in his post until  April 21.

As Dela Rosa acknowledged, the PNP suffered tainted image because of the killings in the drug war and the involvement of some policemen in criminal activities. (READ: Dela Rosa to PNP: Prove there are more good cops than bad ones)

In 2017, President Rodrigo Duterte removed the PNP from his war on drugs twice, both in response to a public outcry over drug-related deaths.

In January last year, Malacañang issued a public apology over the killing of South Korean Jee Ick Joo inside Camp Crame, the PNP headquarters, allegedly by policemen who abducted him from his home in Pampanga in October.

In August 2017, teen killings in the drug war led to the sacking of the entire Caloocan City police force. Deaths in police operations continued to mount, reaching almost 4,000 by the end of 2017.

The President restored the PNP to the drug war in Decembet 2017,  after he acknowledged that his drug war cannot be won without the PNP’s resources.

This, however, did not stop critics and human rights advocates to keep an eye on the police force. The guidelines of the anti-drug campaign are being questioned before the Supreme Court, with lawyers pointing out that they are open to abuse. (READ: No kill order to cops, Dela Rosa tells Supreme Court) Despite the bloodbath and outcry, as far as the PNP is concerned, it has delivered on the drug war.

Drug suspects by the hundreds of thousands had surrendered since Duterte assumed office. According to the latest numbers of the Philippine Drug Enforcement Agency (PDEA), as of December 27, 2017, 119,023 were arrested in anti-illegal drugs operations.

Dela Rosa said he wants the PNP to continue reaping these kinds of results, and not the killings that come with the operations against illegal drugs. (READ: Dela Rosa admits cops demanded money to remove names from drug list)

“With the President’s orders for us last year to go back to the war on drugs, I want to see positive results as every Filipino does – results from a drug war fought with both courage and integrity, less bloody as we have promised, and with the highest respect for human rights,” the PNP chief said in his speech. – Rappler.com