No budget for teachers’ salary hike in 2018 – Diokno 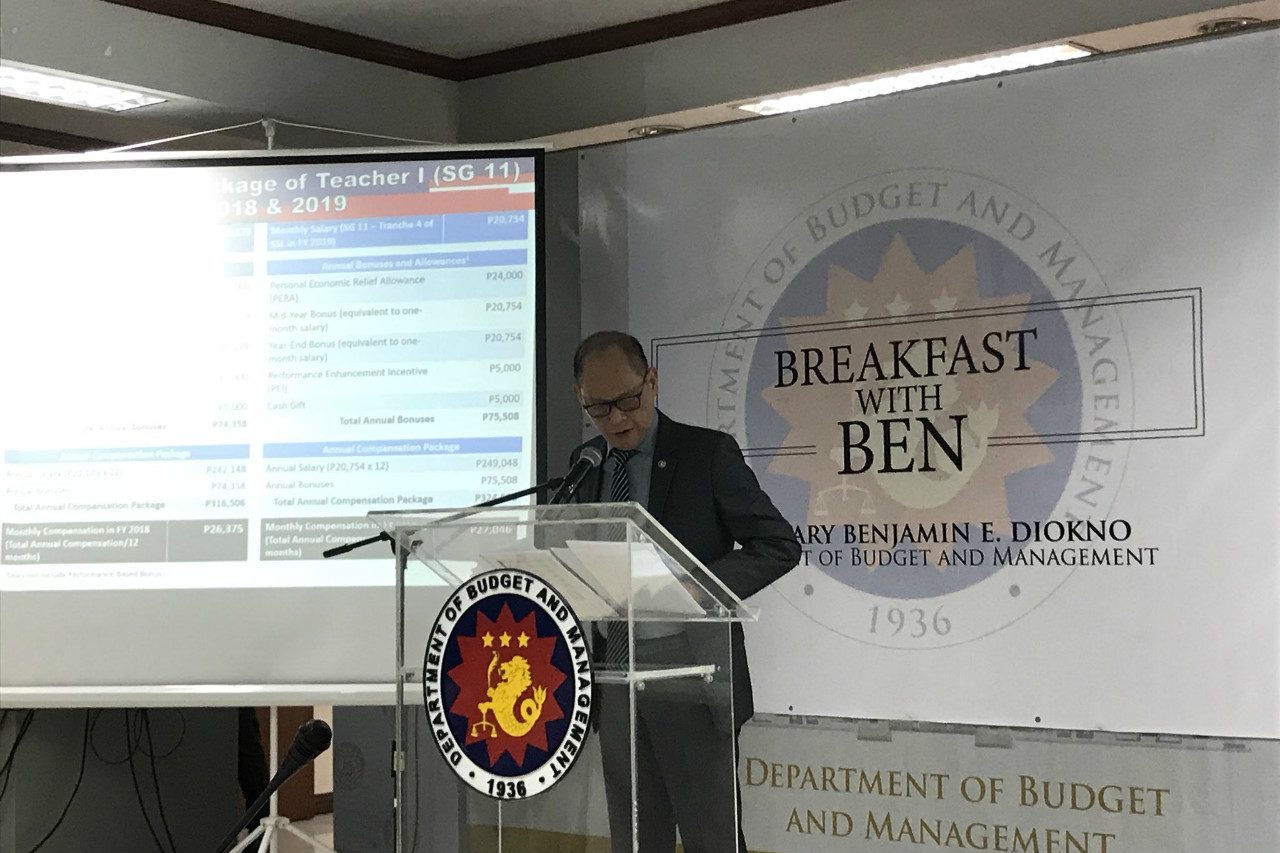 Facebook Twitter Copy URL
Copied
'We cannot unilaterally change the budget because the Congress has the power of the purse...We cannot spend what Congress has not approved,' says Budget Secretary Benjamin Diokno

In a press briefing on Wednesday, January 17, the budget chief said that there was no allocation for teachers’ salary hike in the 2018 national budget.

“It will be difficult to implement an immediate salary increase for teachers in 2018. We cannot unilaterally change the budget because the Congress has the power of the purse…We cannot spend what Congress has not approved.” he said.

Diokno added that teacher’s take-home pay has already increased this year due to the Salary Standardization Law (SSL) and the Tax Reform for Acceleration and Inclusion (TRAIN) law.

“The DBM recognizes the important role of teachers. We are not strictly against the salary increase of teachers. Rather, we prefer to let the 3rd and 4th tranche of Salary Standardization Law run its course,” he said.

Diokno added that new tax schemes were not taken into consideration when the pay adjustment to government workers was crafted during the administration of former President Benigno Aquino III.

“As I said, when this salary adjustment plan was crafted, nobody has thought about TRAIN. A lot will get a reduction in taxes. They will get more money in their pockets,” the budget chief said.

Some P24-billion pay adjustment to government workers’ salaries due to the SSL – public school teachers included – has already been programmed in the 2018 General Appropriations Act (GAA).

In addition, entry-level teachers (Teacher I) with Salary Grade 11 who receive P20,179 monthly (or P242,148 annually) will be exempted from paying taxes as TRAIN mandates that the first P250,000 annual income of Filipinos will not be taxed. On top of it, entry-level public school teachers enjoy P74,358 in bonuses and allowances per year – giving them a total of P26,375 monthly, the DBM said.

Diokno said on Thursday that doubling the salaries of some 880,000 public school teachers will cost the government an additional P343.7 billion in Personnel Services costs.

In the 2018 national budget, the DBM said that costs for teaching positions is set at P381.1 billion. Should their salaries be doubled, it will require a total of P724.8 billion or 2% of the Philippines’ gross domestic product (GDP).

“Doubling teachers’ salaries will cost an additional P343.7 billion which is 2% of the GDP. Our plan is 3% deficit to GDP all the way to 2020 – it will increase our deficit to 5% rather than 3% which will make the public sector deficit unmanageable,” said Diokno.

In previous speeches, President Rodrigo Duterte promised to increase the salaries of teachers. On January 9, Presidential spokesperson Harry Roque said that: “The President also stated that with the second tax reform package, he has instructed DBM and all other agencies to find means to increase the salary of teachers after the initial doubling of salaries of the AFP and the police. So the teachers will be next.”

However, Diokno explained that the second tax reform package is designed to be “revenue neutral.”

“Package 1A of TRAIN is expected to deliver about P90 billion in revenues. The amount that is needed to ‘double’ the salaries of teachers is almost 4 times the revenue yield of Package 1A of TRAIN. Packaged 2 is even revenue neutral,” he said.

The budget secretary added that the move will either result in increase in taxes or reduction of allocation on other expenditure items. He cautioned against sacrificing spending for other budget priorities such as the Build Build Build, free college tuition and the Marawi rehabilitation.

Why not teachers too?

Asked whether it is “unfair” that teachers will not get a salary hike unlike the police and the military, Diokno said that the situation should not be compared.

“We cannot compare kasi hindi ka naman nagpapakamatay sa field. Eh ang teachers may schedule sila eh bakasyon sila ng 2 months,” he said. (We cannot compare because you do not risk your life on the field. The teachers have a schedule, they have 2 months vacation.)

The budget chief gave assurances that there are plans to increase teachers salaries beyond the SSL. He said that a study will be commissioned to do a “benchmarking” on the salaries of teachers and other government personnels on the first quarter of 2019.

Diokno was slammed by several groups for being “Teachers’ Enemy #1” for opposing salary hike for teachers.

The budget secretary also initially said that free tution in state colleges is “too costly” for the government – but was later passed into law in August 2017. – Rappler.com