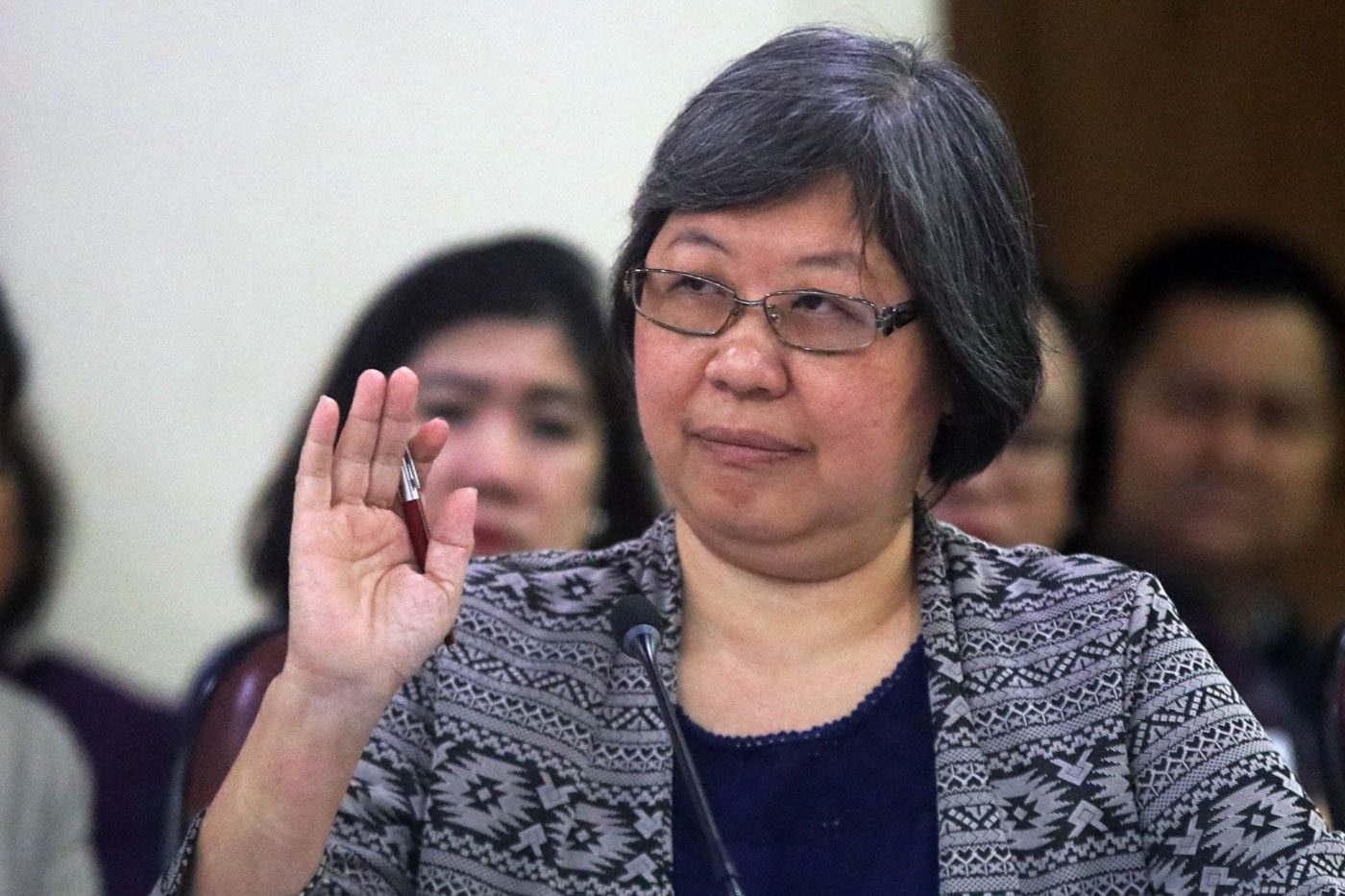 Facebook Twitter Copy URL
Copied
(UPDATED) Lawyer Jocelyn Fabian is questioned on her competence, and at times mocked for her Christian faith, during the continuation of the impeachment hearing vs Chief Justice Maria Lourdes Sereno

MANILA, Philippines (UPDATED) – For hours, lawyer Jocelyn Fabian had to sit in the House Justice Committee hearing listening to one lawmaker after another grill her on her credentials and intentions.

She is a hire of the Office of the Chief Justice (OCJ), and the head of the Technical Working Group (TWG) being hit by the committee as causing inordinate delay in the issuance of survivorship benefits.

Fabian was a certified public accountant since 1985 before she passed the Bar in 2011. Two years later, in 2013, she was hired by the Supreme Court (SC) to the office of Chief Justice Maria Lourdes Sereno, who is now being impeached.

Complainant Larry Gadon wants to make it appear that Sereno hired an incompetent person, and appointed her to a crucial role. Fabian and Sereno are sisters in the Christian faith.

It was on this grounds that she was grilled for hours on end by lawmakers on Wednesday, January 17, in the continuation of Sereno’s impeachment hearing.

He was reprimanded by Pampanga Representative Juan Pablo Bondoc, and Umali even had the remark deleted from record.

But the succeeding interpellations questioned her faith and intentions just the same.

Fabian claimed that she does not know Sereno personally, but she added that one of her character references was lawyer Winnie Salumbides, who also belongs to the Christian faith and is now a spokesperson for Sereno.

Right before applying for the SC, Fabian was an operations head for a real estate company, earning around P60,000 a month on top of bonuses and other perks.

“Why did you decide to leave such a lucrative position, cast your luck, apply for a position that’s not permanent, you wouldn’t even know you would be accepted?” Cebu 3rd District Gwen Garcia asked her.

“It may sound incredible, but that is the truth and if I am a person of figures, I am also a person of faith, I used to be missionary, I am used to minimal compensation. I am not married, there is not much to be worried about, and my family, by the grace of God, is able,” Fabian said.

But still Garcia was not satisfied.

“You said that you didn’t know the Chief Justice, why did you not apply for a law firm that you know, or applied somewhere else…unless you can convince us that such blind faith is credible, please do not try to muddle the issue here,” the lawmaker said.

This exchange between Garcia and Fabian went on for a while, leading Fabian to say: “I do not apply just because I know somebody, or the prospect is profitable. My view of working is not really to earn.”

Garcia refused to buy Fabian’s story that she wanted to “contribute to nation building” and just counted on her stars that Sereno – who she said she believed in – would hire her.

“You based your beliefs in the Chief Justice and that she would realize your dreams of nation building because you realized you belonged to the same faith?” the Cebu representative asked.

Bondoc butted in and tried to appease Fabian by saying that what they’re questioning is whether Sereno was rational in hiring her – an experienced accountant – for a crucial job in the SC.

But then he came around to using Fabian’s faith again in criticizing the performance of the TWG, which supposedly caused an average two years in delays in issuing survivorship benefits.

“Why would the Chief Justice hire a person who cannot explain why she left the private sector? You did not use rational thinking, you used faith for your decision in your private life, would that be the same reason for the decision you now make which the SC is now saying, you were wrong?” he said impassionately.

To that, Fabian wanted to respond, but she had to assert herself in the microphone before Umali allowed her to speak. “Make it concise,” said Umali.

“Okay na?” Umali said, as he moved on to the next topic.

Umali maintained the committee was not harsh on Fabian, and defended that the lines of questioning of the members were just because of Fabian’s evasiveness.

Reacting to this story, Senator Joel Villanueva criticized the way Fabian was questioned on her faith. Villanueva also belongs to the Christian church.

“It’s not rational to serve government because of low pay, and faith in God and nationalism are not rational explanations! EXCUSE ME PO!” Villanueva said on Twitter.

The Office of the Chief Justice (OCJ) also came out with a statement of support for Fabian, saying she is “highly qualified” for the job.

The OCJ clarified that while Sereno and Fabian share the same faith, they do not go to the same church. They also said that Sereno was not aware that Fabian had Salumbides as one of her character references.

“There were two applicants for the Court Attorney vacancy at the time, and Atty. Fabian was found to be more qualified. After favorable recommendation of the interviewing panel, and a final interview at which the Chief Justice met Atty. Fabian for the first time, Atty. Fabian was appointed in May 2013,” the OCJ said.

They added: “Considering her background, Atty. Fabian is unquestionably highly qualified and well-equipped to assist the judiciary in the identification and resolution of its financial concerns.” – Rappler.com