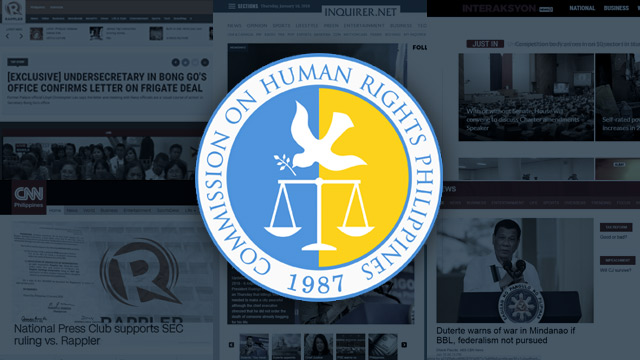 MANILA, Philippines – The Commission on Human Rights (CHR) on Thursday, January 18, urged the public to defend press freedom amid threats against it.

In a statement to the public, the CHR said it “stresses the value of these freedoms in upholding the human rights of everyone. And in any context, but especially when there are attempts to curtail it, it is equally important to protect press freedom.”

In a move widely seen as an attack on press freedom, the Securities and Exchange Commission (SEC) on Monday, January 15, revoked Rappler’s license to do business allegedly for violating the Constitution and the Anti-Dummy Law.

The SEC claimed that Rappler violated the Constitution with funds coming from Omidyar Network, a fund created by eBay founder Pierre Omidyar.

The CHR added, “Freedoms of information, speech, and expression are marks of a healthy, functioning democracy. The media, for its part, has always played a crucial role in enabling these rights, as well as in propagating truthful insights and, when needed, speaking truth to power.”

Stung by critical media reporting, President Rodrigo Duterte has repeatedly attacked the press and has said journalists are legitimate targets of assassinations. (READ: From Marcos to Duterte: How media was attacked, threatened)

The CHR said it also hoped the SEC’s decision was not an attempt to curtail the freedom the press and that it would not be followed by other infringements on the right to freedom of expression.

“If the statement of Rappler is true with regards to its ownership and control, as well as that due process was not observed, then this is indeed something that is deeply concerning in the context of press freedom,” it said.

The CHR also said press freedom could only be attained if media remained free from political and economic intervention.

The CHR has been outspoken against Duterte’s war on drugs, which prompted members of The House of Representatives to reduce the CHR’s 2018 budget to P1,000 during budget deliberations.

Various local and international media and civic groups slammed the SEC decision as an attack on press freedom.

Rappler’s lawyer, Francis Lim, said the SEC decision to nullify the PDRs issued by Rappler Holdings Corporation to Omidyar Network, and to revoke Rappler’s articles of incorporation, is too severe.

Rappler said it would continue to operate, and defend and uphold the freedom of the press, which is guaranteed by the Constitution, as it contests the SEC ruling in court. –Rappler.com