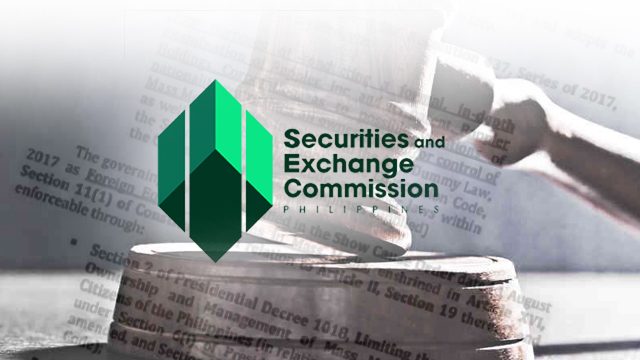 MANILA, Philippines [UPDATED] – In a decision published on its website on January 15, 2018, the Securities and Exchange Commission (SEC) revoked Rappler’s registration for allegedly violating the Constitution and the Anti-Dummy Law on the basis of one clause it interpreted differently from the parties involved.

Below are our responses to frequently asked questions regarding this case.

Q. What are the facts of the case?

In December 2016, the Office of the Solicitor General wrote a letter to the Securities and Exchange Commission (SEC) asking the SEC to investigate Rappler over its PDRs.

On July 8, 2017 the SEC created a “special panel” to conduct a “formal, in-depth examination of Rappler Inc and its parent, Rappler Holdings Corporation, as to possible violations of nationality restrictions on ownership and/or control of Mass Media entities.”

Rappler was not informed about the panel’s findings, if any.

On Monday, January 15, 2018, after only 5 months of investigation, the SEC released an En Banc decision which voided the Omidyar Philippine Depositary Receipts (PDRs) and revoked Rappler’s Certificate of Incorporation, in effect cancelling its license to operate. It also immediately forwarded its decision to the Department of Justice for appropriate investigation.

This decision will be appealed by Rappler.

Q. Why is this a press freedom issue?

These events did not happen in a vacuum. Rappler was clearly singled out because of its critical reporting.

The investigation was prompted by a letter from the Solicitor General to the SEC in December 2016 asking it to investigate Rappler’s PDRs. The SEC arrived at a decision to revoke the registration of a major news organization following only 5 months of review. It clearly acted with undue haste and it short-circuited the process. The SEC decision was promptly followed by subpoenas issued by the National Bureau of Investigation (NBI) in relation to a Rappler story published way back in 2012.

These developments are also the culmination of almost two years of relentless attacks by the President’s social media defenders, a number of whom now occupy positions in government. (READ: How SEC’s Rappler decision is a test case for press freedom)

In July 2017, no less than President Rodrigo Duterte singled out Rappler in his State of the Nation Address and falsely claimed that we were 100% foreign-owned – by Americans.

Rappler is not the only media organization under attack. In his speeches, the President also relentlessly lashed against the owners of the Philippine Daily Inquirer. He also threatened to block the renewal of the franchise of broadcast giant ABS-CBN.

Q. Can you name some of the Rappler stories which may have prompted this attack?

Rappler is known for its brand of uncompromising journalism. Among the recent stories that have gained recognition are the “Impunity series”, which tackled drug-related killings in the Philippines, as well as our ongoing “Propaganda series”, which tapped into big data to look at how the internet and social media were weaponized after the 2016 presidential elections.

Q. Presidential Spokesperson Harry Roque said this is not a press freedom issue. Rappler is not barred from reporting or interviewing.

An attack on press freedom doesn’t have to be brazen and explicit, it could be economic. By revoking Rappler’s license, the SEC prevents Rappler from conducting business, including paying its employees. This, in turn, affects the ability of its journalists to independently report what people need to know.

Further, recent developments have already belied Roque’s initial statements. Initially tasked to probe Rappler in relation to the PDRs, the NBI’s investigation has clearly turned into a fishing expedition as shown by the issuance of a subpoena over Rappler’s purported violation of the cybercrime law.

Q. Is Rappler owned and controlled by foreigners?

No. Rappler is 100% Filipino-owned and controlled. The shareholders, directors, and officers of Rappler Inc (Rappler), and its parent company, Rappler Holdings Corporation (RHC), are all Filipinos. For more on who owns Rappler, refer to the diagram on this page: The Rappler Story: Independent journalism with impact.

Q. What is the nature of Rappler’s engagement with its foreign investors?

In 2015, RHC issued Philippine Depositary Receipts (PDRs) to North Base Media and Omidyar Network. These were duly disclosed by Rappler in the following stories:

PDRs are legal instruments or means by which foreign entities can invest in Philippine companies with nationality restrictions. They do not equate to ownership or control by the PDR holders of day-to-day operations. An over-simplification would be comparing PDRs to betting in a horse race: putting funds behind a horse does not mean a bettor owns the horse or has a say in the horse’s training, the choice of its jockey, etc. But if the horse wins, the bettor can collect winnings. A bettor chooses a horse that s/he believes has strong chances of winning. A PDR holder chooses to invest in a company because of the belief it would bring returns.

RHC wanted Rappler to expand its operations in the region as well as invest in innovation. Aligned with this thrust, Rappler had plans for Rappler Indonesia and Rappler Singapore even before RHC issued PDRs to North Base Media and Omidyar Network.

PDRs are financial tools that are legal and accepted in the business community, as seen in the cases of ABS-CBN, GMA-7, and PLDT.

Yes, as all issuances of the PDRs were disclosed to the SEC in 2015 in compliance with the SEC’s regulations.

Q. Did the SEC void all of Rappler’s PDRs?

Q: The SEC says a clause in Omidyar’s PDR is void because it requires Rappler to seek Omidyar’s approval on corporate matters – including even changing its address – in effect, granting and selling control. Is this true?

This is wrong. Control was not given and it was never exercised. Omidyar has no hand in our day-to-day operations. This is the clause the SEC is referring to:

“not to, without prior good faith discussions on ON PDR Holders and without approval of PDR holders holding at least two-thirds (2/3s) of all issued and outstanding PDRs, alter, modify or otherwise change [RAPPLER’S] Articles of Incorporation or By-laws or take any other action where such alterations, modifications, change or action will prejudice the rights in relation to the PDRs.”

The purpose of that clause was to ensure that Omidyar’s investment in the PDRs will not be prejudiced in case RHC decides to take any of the actions described in that clause without prior discussions with, or agreement by, the PDR holders.

The clause is superfluous because Omidyar already waived its right to enforce it to prove it had no intent to control Rappler. And because control was never exercised, Rappler should not be penalized with a harsh decision revoking its license.

Q. Can Rappler’s stockholders and investors intervene in its editorial processes?

It is the journalists in Rappler, not stockholders or investors, who make editorial decisions – setting the news agenda, determining what stories to pursue or ignore.

Rappler’s shareholders signed an agreement giving full editorial and management control to the journalists, whose collective aim is to create a truly independent news group and crowdsourcing platform free of vested interests.

Q. Did Rappler ever deny that it is a mass media company?

Rappler said in its verified statement that its business is unique. It is media but it is not engaged in the business of traditional mass media alone (e.g., print or broadcast). It publishes content that is purely online.

Rappler is also not solely dependent on advertising. We are an online media news group and a tech start-up. We own a patent. We develop platforms. We engage in the data business. Most importantly, through Move.PH, our civic engagement arm, Rappler uses technology to strengthen civic engagement and enhance the commitment of every citizen to participate and impact their world.

This is the primary purpose of Rappler, as stated in its Articles of Incorporation:

Rappler has been recognized globally for its innovative approaches and products. Months after its launch, Rappler and its patented mood meter and mood navigator caught the attention of media trends observer, Niemanlab.

Rappler was the only start-up media group included in a look on innovation in the Asia-Pacific, which was launched and distributed at the APEC CEO Summit in Bali in October 2013.

Rappler was also featured by TechinAsia, a media, events, and jobs platform on a mission to build and serve Asia’s tech and start-up community, for being at the cutting edge of journalistic innovation, especially when it comes to the convergence of technology, open data, and media.

In March 2017, the Reuters Institute for the Study of Journalism featured Rappler as one of 4 international news outlets creating truly digital native content and making money off it.

The SEC decision is anti-innovation.

Q. The SEC is saying due process is not an issue in this case. What is the usual process for cases like this?

The SEC did not follow rules of procedure in handling the Rappler case. Rappler was not informed about specific charges against it. It was deprived of the opportunity to refute findings of the Special Panel. The decision of the Special Panel went straight to the SEC En Banc. The Commission En Banc accepted the recommendations of the Special Panel, a subordinate body, in toto with no further inputs.

In previous decisions, the SEC allowed companies, which also have nationality restrictions on investments, time to fix problems so they become compliant. This did not happen in this case. (READ: If there was a violation, Rappler not given time to cure it – lawyer)

Its decision on Rappler was too harsh.

WATCH: Lawyer Francis Lim on how SEC violated own rules in Rappler case

Q. How did the SEC decide other similar cases involving foreign investments in prohibited sectors?

The SEC showed leniency toward telecommunications giant PLDT, or Philippine Long Distance & Telephone Co. which was investigated for supposedly skirting the Constitutional rule on 60% Filipino-40% foreign ownership of public utilities. The SEC did not order PLDT’s dissolution, arguing that doing so would impair telco service delivery by PLDT.

The Philippine Center for Investigative Journalism (PCIJ) pointed out that, as a regulator, the SEC morphed from lenient to severe in deciding the Rappler case.

Q: Is Rappler stopping operations on account of the SEC order?

No. There is a legal process to be followed, including the filing of the necessary motions for reconsideration with the courts. The SEC also made this clear, that Rappler can continue operating.

Because this is a constitutional issue involving press freedom, Rappler will bring this case all the way to the Supreme Court, if warranted. In the meantime, we will continue to deliver the news, write stories, and provide information that the public should know. – Rappler.com

If you have further questions regarding this issue, please email feedback@rappler.com