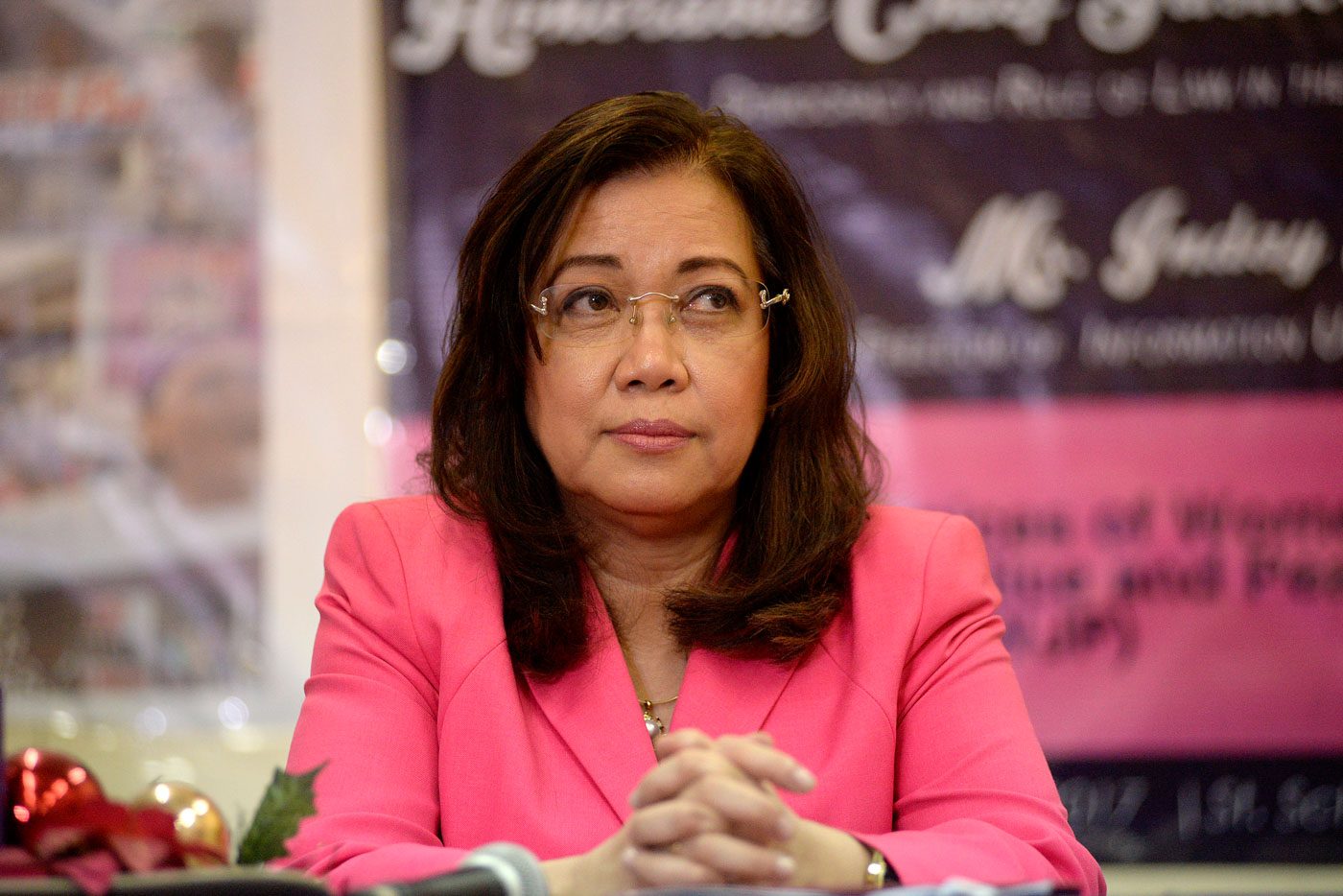 MANILA, Philippines – Chief Justice Maria Lourdes Sereno said on Tuesday, January 23, that a Court of Appeals (CA) Justice lied when she claimed that Sereno promised “protection” to 3 other CA justices in a deadlock with the House of Representatives.

“The Chief Justice categorically denies that she told Justice Andres Reyes Jr to tell the 3 Court of Appeals Justices – Stephen Cruz, Edwin Sorongon, and Nina Valenzuela – who were subject of the show cause order issued by the House of Representatives to file with the Supreme Court a petition for prohibition with application for TRO and that she would allegedly take care of it,” said Sereno spokesperson Jojo Lacanilao in a statement to media.

The House committee on justice continued on January 23 deliberations to determine probable cause in an impeachment case against Sereno.

CA Associate Justice Remedios Salazar Fernando, who appeared as a resource person before the committee, said Sereno had promised “protection” to the 3 associate justices, who had been asked to explain why they should not be held in contempt by the House of Representatives.

Cruz, Sorongon, and Valenzuela in June 2017 instructed the House to release 6 Ilocos Norte province officials ordered detained by the House after they were cited in contempt for refusing to participate in a probe into the alleged misuse of the provincial’s tobacco funds.

Fernando, citing then CA Presiding Justice and now SC Associate Justice Reyes, told the committee on justice that Sereno advised the 3 CA justices to apply for a Temporary Restraining Order (TRO) before the Supreme Court.

“Siya na daw ang bahala (and she would take care of it). Everyone went quiet then,” said Fernando, citing Reyes.

On the same day Sereno and Reyes met (June 21), they released a joint statement reminding the House to “observe separation of powers.”

In their statement, Sereno’s camp insisted that she spoke about the contents of the eventual statement only during her meeting with Reyes.

“The Chief Justice did not advise Justice Reyes what particular legal remedy or petition the 3 CA Justices should take. Neither did she assure Justice Reyes of a favorable outcome on such a petition by telling him that she would take care of that petition in the Supreme Court,” said Lacanilao.

Sereno’s camp emphasized that later on, when the so-called Ilocos 6 asked the Supreme Court to intervene in the House hearing, Sereno inhibited herself from the case.

“The Chief Justice has always advocated the cause of judicial independence that is essential to the rule of law,” Lacanilao concluded.

The House committee on justice has been hearing the Sereno impeachment case since September 2017. It has thus far determined that the Larry Gadon complaint is sufficient in form, substance, and grounds.

Committee chairman Reynaldo Umali had earlier said he expects the committee to vote on it eventual report – on whether to pursue the complaint or junk it – by February 2018.

If the committee votes to impeach Sereno and the House accepts its report during plenary, Sereno will be deemed impeached. The case will then be brought to the Senate, sitting as an impeachment court. – Rappler.com