Pacquiao confronts Lorraine Badoy for spreading fake news vs him

Jan 30, 2018 2:12 PM PHT
Camille Elemia
Facebook Twitter Copy URL
Copied
Communications Undersecretary Lorraine Badoy apologizes to Senator Manny Pacquiao for her malicious post against him during the 2016 polls, and tells him that she too has been on the 'receiving end of lies and inaccuracies' 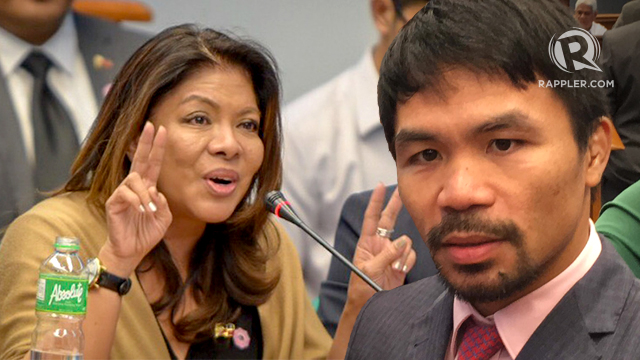 MANILA, Philippines – Senator Manny Pacquiao on Tuesday, January 30, confronted a Palace official and rabid supporter of President Rodrigo Duterte for spreading malicious information against him during the 2016 elections.

Pacquiao called out Presidential Communications Operations Office (PCOO) Undersecretary for new media Lorraine Badoy for posting a photo of his campaign vehicle outside a house, which Badoy claimed belonged to the senator’s mistress.

During the second Senate hearing on fake news, Pacquiao read aloud Badoy’s Facebook post in 2016, which said, “Guess what I saw when I went on a run this morning in my village. Manny Pacquiao campaign car in front of his mistress’ house.”

Badoy, who was at the Senate hearing, explained her post was in reaction to Pacquiao’s comment calling homosexuals as “masahol pa sa hayop (worse than animals).”

“It was in reaction, which was very hurting. I am not lesbian, gay, bisexual….What you said is hurting because [there are] people close to me,” Badoy said.

Pacquiao said: “I’m not talking LGBT here [but] your personal comment na ito ba ang Christian, ito ‘yung house ng mistress niya, may campaign car ba. Di pa nga ako nakapunta doon. Bahay ‘yun ng tao ko (that is this someone who is Christian? This is the house of his mistress, there’s a campaign car there. I’ve never even been there. That’s the house of my staff).”

Aside from the hurtful comment, Badoy said it was wrong because homosexuality has long been removed from the medical diagnostic manual.

“Lets just chalk it down to differences in opinion. Pero doctor din po ako, matagal na tinanggal sa (But I also a doctor, it’s been removed for quite some time from the) diagnostic manual, aside from being hurtful,” she said.

She then apologized to Pacquiao and said she now knew how it felt to be on the other side.

“I apologize that I did hurt you. Yes, I’ve been on the receiving end of lies and inaccuracies, I do know finally how it feels like,” Badoy said.

She also agreed to take down the post upon the request of Pacquiao, who told her that the post was still up at that time.

Senate public information and mass media chairman Grace Poe then asked Badoy how she came up with the post. Badoy said she only got the information from a taho vendor and the village guard.

Pacquiao then told Badoy that what she posted was clearly a fake news.

“That’s a fake news. What you did is fake news. Kasi pinost mo sa account mo, ganito, marami pa nakalagay doon (Because you posted it on your account, then there were so many other things posted there)….It hurt,” Pacquiao said.

Asked if she corrected her post, Badoy said she never did.

“I think there is a lesson here. We live in a world getting closer each other. And you say something that’s hurtful, there’s a chance that hurt will bring you to hurt,” Badoy said.

Senator Joel Villanueva, for his part, called out Badoy’s statements and questioned her seeming justification of her act.

Poe defended Badoy. “No, no, no. I see some remorse. I see that you made a mistake. It’s important that you see it’s a mistake. There’s been an apology, it’s not justified,” Poe said.

Villanueva, however, still raised the issue and said the wrong information could have cost Pacquiao his candidacy, as the boxing champ ran for senator in 2016.

“Let’s use the same example, damage has been done. What if Senator Manny didn’t win because of that? I mean there [are] so many countries right now na na-e-elect leaders nila (that their leaders were elected) because of fake news and now we say, we’re only accountable to our followers?” Villanueva said.

Badoy was also criticized after she ridiculed Jover Laurio – the woman behind Pinoy Ako Blog, which is critical of the administration – for her physicial appearance.

“If there is anything at all that the unmasking of the hideous creatures behind the poison anonymous blogs teaches us, it is this: YOU GET THE FACE YOU DESERVE,” Badoy said in a Facebook post on October 13, 2017.

During the Senate hearing on Tuesday, Badoy sang a different tune and called for kindness and “compassion.” – Rappler.com