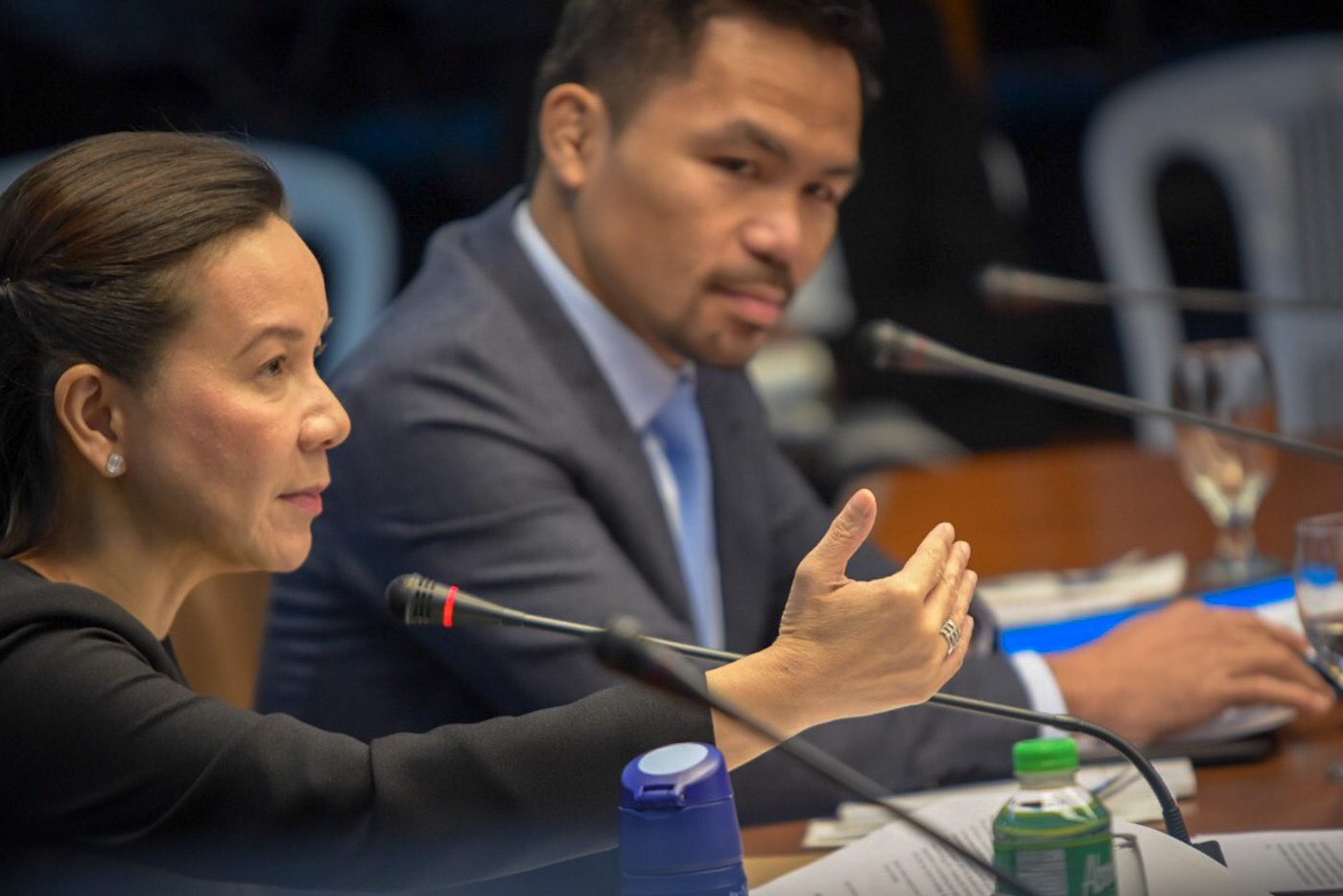 MANILA, Philippines – Did Presidential Communications Secretary Martin Andanar ever consider shutting down Assistant Secretary Mocha Uson’s blog or asking her to leave the government because of her controversial social media posts?

Senator Grace Poe posed this question to Andanar at the second Senate hearing on the proliferation of fake news on Tuesday, January 30, where she pointed to a potential “conflict of interest” between Uson’s official functions and running her private blog.

During the hearing, Andanar  insistes that Uson’s blog does not reflect the views of the Presidential Communications Operations Office (PCOO).

Poe pointed out that Uson’s government position and use of her blog to fulfill that same position has made Palace communications confusing, to the disservice of citizens.

“Have you ever considered, and I hope you answer me in all candidness, that since her own private blog is also a way of expressing and communicating, that it is indeed overlapping with her function, perhaps even using government time to impart, to be able to fulfill work on her own blog – have you ever considered that this is perhaps a conflict of interest and it should be shut down, sir?” asked Poe.

Andanar responded that he had spoken to Uson about her blog and convinced her to take down certain erroneous or controversial posts, after he received complaints from the subjects of the posts.

“I’ve spoken to Mocha about it, Madam Chair, and we’ve also spoken about her freedom of expression and also her way of speaking on her own Facebook page and I have called her a few times and she has also taken down a few of her remarks,” he said.

Poe, however, insisted and asked how PCOO employees are punished for posting misleading or malicious information on their social media accounts. She wondered if officials like Uson only got a “slap on the wrist.”

PCOO Assistant Secretary Marie Banaag responded that Uson knows “she is not exempted from any accountability.”

Poe also asked if the PCOO imposes standards on the quality of information Uson posts on her blog, similar to standards imposed by news organizatons on their reports.

Andanar admitted that the PCOO does not approve or vet many of Uson’s posts on her personal blog.

However, Andanar agreed that Uson “has to be accountable to the law.” He pointed out that those who have issues with Uson can take the same route as Senator Antonio Trillanes IV, who filed a cyber libel complaint against her.

Better off outside gov’t?

Poe floated to Andanar if it would be better for Uson to carry on with her blogging as a private individual, hired by “a group of loyal supporters…to head their pro-Duterte campaign.”

“But to be under the PCOO, the official communications office of the Republic, wouldn’t this be in conflict?  I think Asec would be permitted more freedom to speak out should she be in the private sector, sir,” said Poe.

In response, Andanar said that Uson “has a specific market to serve and she is serving that market well.” When asked, he said Uson serves the overseas Filipino worker (OFW) market and socio-economic classes C, D, and E.

Poe then asked, “Tell me if she can still do this as a private citizen and not as a worker of government?”

Government officials, the senator stressed, are held to a higher degree of accountability than private citizens, because of the public trust they are tasked to keep.

During the hearing, Andanar, admitted to the PCOO’s previous “mistakes” but stressed they were not done maliciously.

“We have made mistakes in the past. We have been held accountable for that. These were honest mistakes with no intention to malign anybody,” he said.

Andanar also spoke for the thousands of government personnel under his supervision.

“These should not overshadow, speak for the work of thousands in government who work tirelessly to deliver information,” he said.

While Uson and Andanar have insisted that her Facebook account should not be taken as an official source of government information, they have both admitted using the same blog to promote government programs and initiatives.

It is also well-established that Uson was appointed to her post out of President Rodrigo Duterte’s “debt of gratitude” for her help in promoting his presidential candidacy, which she did mainly through her blog. – Rappler.com