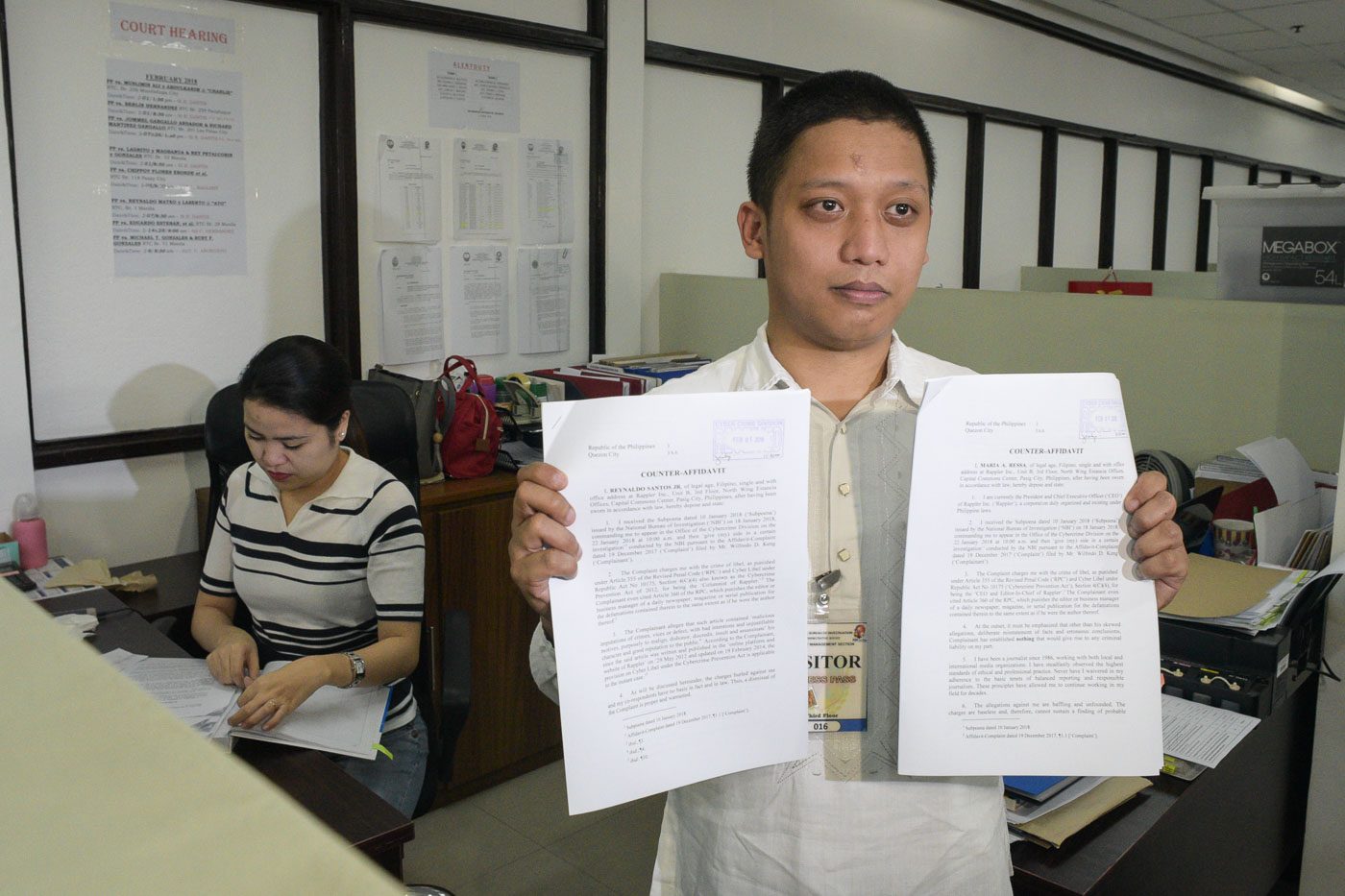 MANILA, Philippines – Rappler on Thursday, February 1, submitted to the National Bureau of Investigation (NBI) its counter-affidavit against the cyber libel complaint of businessman Wilfredo Keng.

Rappler CEO and Executive Editor Maria Ressa and former Rappler reporter Reynaldo Santos Jr filed their answers to the complaint through their counsel.

Both counter-affidavits argued that there was no crime of cyber libel because the report that is subject of the complaint was published in May 2012 or 4 months before the Cybercrime Prevention Act was enacted in September 2012. All criminal laws are not retroactive.

In his complaint, Keng said that because Rappler updated the report on February 19, 2014, a crime still happened after the enactment of the law.

In Ressa’s answer, she said that the cyber crime law did not differentiate cyber libel to the ordinary crime of libel penalized under Article 355 of the Revised Penal Code (RPC).

She cited a Supreme Court resolution on the Cybercrime law: “But again, online libel is not a new crime. It is essentially the old crime of libel found in the 1930 Revised Penal Code and transposed to operate in the cyberspace.”

Since they’re the same, Ressa said Article 90 of the RPC extinguishes criminal liability within one year. Keng filed the complaint in October 2017.

“Without any crime, there is no reason for this Honorable Office to conduct an investigation involving me or anybody from Rappler,” Ressa said.

Keng accused Rappler of  not “observing the ethical standards of journalism” when Santos wrote that the businessman had allegedly lent his SUV to the late former Chief Justice Renato Corona, raising questions of ethics and propriety.

But it was not the SUV issue that Keng complained about, but the part of the story that cited an intelligence report which said that the businessman had been linked to illegal activities like human trafficking and drug smuggling.

“It contained malicious imputations of crimes, with bad intentions, purposely to malign, dishonor, and discredit my character and good reputation,” Keng said.

Santos’ counter-affidavit only argues the technical points: “The absence of a law or the fact that such law was not in effect, he submits that I be held liable. This is a clear violation of my rights and should not be countenanced.” (READ: What’s the right to be forgotten? Cyber libel complaint vs Rappler sparks discussion)

Ressa as CEO was tagged in the complaint for the principle of command responsibility.

In her counter-affidavit, she said: “I have been a journalist since 1986, working with both local and international media organizations. I have steadfastly observed the highest standards of ethical and professional practice. Never have I waivered in my adherence to the basic tenets of balanced reporting and responsible journalism. These principles have allowed me to continue working in my field for decades.”

In a January 19 interview, NBI Cybercrime Chief Manuel Eduarte said that despite a non-retroactive law, Rappler can still be liable due to the theory of continuous publication.

“Even if it was posted in 2012, it can still be seen at the time they filed a complaint, or at the time the law was passed, so our presumption as far as our investigation is concerned, they still violated the cybercrime law,” Eduarte said in Filipino.

Rappler’s counsel, Jose Jesus “JJ” Disini, a leading expert in technology law and lead petitioner in the Supreme Court against the Cybercrime law, said the complaint is dangerous for media and bloggers.

“If the theory is that if a libelous article is published in the past, and continues to be accessible today, and that constitutes libel today, then no one is safe. Anyone that has a libelous article that continues to be accessible may be charged with libel, and moving forward, this affects everyone, not just media, even bloggers,” Disini said. – Rappler.com