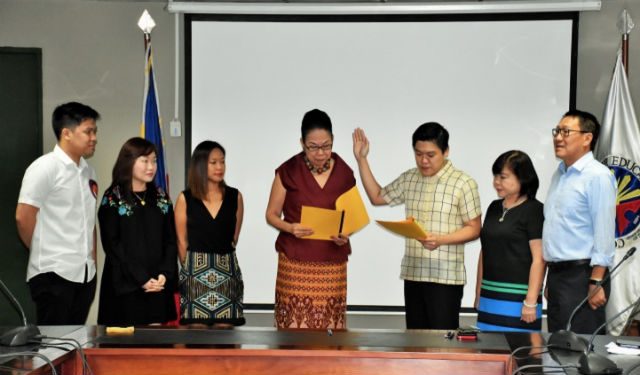 MANILA, Philippines – Another top official of the Commission on Higher Education (CHED) stepped down, just two weeks after former chairperson Patricia Licuanan was forced to resign by Malacañang.

Karol Mark Yee left his post as executive director on Wednesday, January 31. Rappler obtained a copy of his resignation letter on Thursday, February 1.

According to Yee, he has been receiving numerous threats and harassment since President Rodrigo Duterte appointed him in July 2017, replacing dismissed Julito Vitriolo.

Yee did not say who were making the attacks against him.

Despite the “legal and political challenges,” Yee said he focused on strengthening CHED’s internal systems and processes after his appointment.

“Throughout this time, however, I have been at the receiving end of unceasing harassment and of relentless threats against my life and person, which has caused me great personal and psychological strain, that has ultimately made it exceedingly difficult to further proceed,” said Yee.

He now hopes Duterte, along with newly appointed CHED Officer-in-Charge and Commissioner Prospero de Vera III, can protect the commission from the “destructive interests” of certain unnamed individuals who supposedly stop CHED from attaining its full potential.

“I am grateful to the President for the rare opportunity to be of service under this government, and to work for education, as has been my only desire,” said Yee, who also thanked his former CHED colleagues.

“Rest assured that I shall continue supporting the President’s landmark initiatives and programs in higher education, as we forge on toward a more equitable, accessible, and quality higher education system in the years to come,” he said.

Yee was appointed by Duterte after the Ombudsman dismissed Vitriolo in January 2017 in relation to an allegedly irregular 1996 agreement between the Pamantasan ng Lungsod ng Maynila and the National College of Physical Education to operate diploma programs.

Vitriolo brought the case to the Court of Appeals (CA), which then reversed the Ombudsman’s decision and reinstated him as executive director in August 2017.

Licuanan refused to recognize Vitriolo’s return, arguing Yee’s appointment was still effective. She believes Vitriolo had helped kick her out of CHED, a claim which Vitriolo has denied.

Yee was a Fulbright Scholar who finished his masteral degree in international education policy at the Harvard University Graduate School of Education.

Prior to his stint in CHED, Yee was the legislative officer of former Senate president Edgardo Angara.

With Yee’s resignation, Vitriolo believes he is now free to assume the executive directorship.

“On the resignation of Mark Yee, he must have realized, although belatedly, that he is not standing on firm ground in view of the latest CA resolution. Moreover, it must be emphasized that Mark Yee was appointed while the case was pending, thus, the position of executive director has never been declared vacant as required by law,” said Vitriolo.

“I am hopeful that the present commission will now respect the court order and uphold the rule of law,” he added.

Read the full copy of Yee’s resignation letter below: