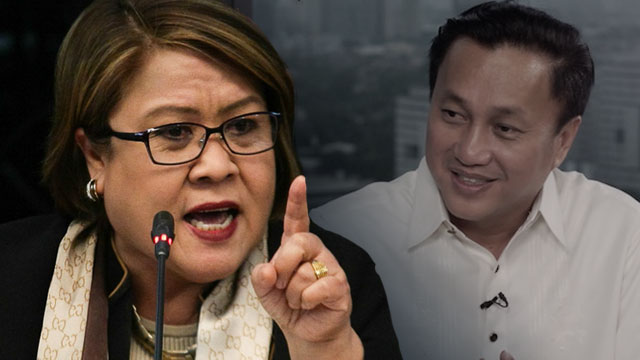 “Mr Tolentino, you lost your senatorial bid, and this was confirmed upon the opening of the ballot boxes from the 650 clustered precincts that you designated as best exemplifying the alleged fraud or irregularity,” De Lima wrote in her latest dispatch from the PNP Custodial Center in Camp Crame, Quezon City, where she is detained over drug charges.

Tolentino ranked 13th during the 2016 elections. His closest rival in the Senate race, De Lima, secured the last Senate seat as the 12th placer.

De Lima said Tolentino knows that he “had no vote recovery” based on the revision or recount of ballots in his pilot precincts. She added that “not an iota of fraud or irregularity” was discovered to cast doubt on the credibility of the 2016 elections.

“You were unable to surpass the votes credited to me, that is why you just had to resort to dilatory tactics. The Filipino people deserve to know the truth. You simply lost. No one cheated you,” De Lima said.

The senator said Tolentino is spending millions for his protest “because he was hoping to please his new master.”

De Lima made these remarks after Tolentino on Wednesday, January 31, brought up his electoral protest against the senator. The Inquirer reported that Tolentino wants to summon former elections chief Andres Bautista to stand as “hostile witness” in his protest against De Lima.

In her statement, De Lima also called the former Metropolitan Manila Development Authority chairman “pathetic” in urging her to “do a Migz Zubiri” – a reference to Senator Juan Miguel Zubiri who resigned in August 2011, days before the Senate Electoral Tribunal declared Senator Aquilino Pimentel III the rightful winner.

“Need Mr Tolentino be reminded that Pimentel’s protest was clearly meritorious as proven by the revision results of massively manufactured election returns from then Ampatuan-controlled province of Maguindanao?” said De Lima, who was then Pimentel’s election lawyer.

The senator called Tolentino’s “patently frivolous and baseless” protest as nothing compared to Pimentel’s election protest.

De Lima said Tolentino is dragging the case by delaying the presentation of evidence, and by resorting to “an unnecessary decryption of ballots.”

She claimed this as unnecessary because, according to her, the statement of votes by precinct, the election returns, and the physical count of official ballots all tally and match.

“This is my advice to you, Mr Tolentino, wake up and stop your imaginings. You are already popular. Surely, you do not need a Leila De Lima to boost your popularity or the people’s awareness of you. Stand or fall on your own merit. With acceptance comes healing,” De Lima added. – Rappler.com