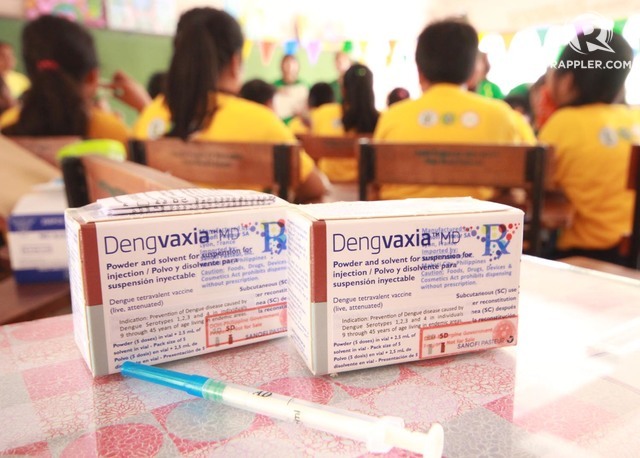 MANILA, Philippines – Department of Health (DOH) Secretary Francisco Duque reminded people on Monday, February 5, that the government – through Philhealth – covers medical costs for a wide range of illnesses, including dengue.

Rappler asked Duque if the DOH will provide free medical services for children vaccinated with dengvaxia after Department of the Interior and Local Government (DILG) Undersecretary for Barangay Affairs Martin Diño made a public callout on Monday.

Under the latest medical case rates of Philhealth, the government will cover P6,000 worth of expenses for patients diagnosed with acute gastroenteritis. The same goes for any other diagnosis for a child vaccinated with dengvaxia.

If the vaccinated child is diagnosed of dengue, Philhealth can cover P10,000–P16,000 worth of expenses.

With this, Duque said there is no need to declare a state of national emergency.

During the joint press conference of the Volunteers Against Crime and Corruption (VACC) and the Public Attorneys Office (PAO) on Monday, VACC chairman Dante Jimenez showed a letter he sent to President Rodrigo Duterte requesting that a state of national emergency be declared.

Declaring a state of national emergency means the special budget for calamities will be made available.

“Definitely no justification for declaring a state of national emergency. We can handle the situation with sufficient funding and supplies,” Duque said.

It was in that same press conference where Diño said that each child vaccinated with dengvaxia should enjoy free medical services in their barangay health stations.

(I will suggest to DILG Secretary Eduardo Año to order all barangay officials and barangay health workers to monitor all children, that the moment you feel something off, you are provided a free medical service.)

Under the local government code, barangay health stations are under the organisational structure of the Local Government Unit (LGU) but the DOH is involved in some commodities, among them vaccination and medicines.

“That is what the DOH is precisely supporting in tandem with the DILG and the Department of Education,” Duque said.

For his part, Diño said barangay units will be “actively participating,” starting off with a directive for officials to gather the names of every child vaccinated with dengvaxia so they can be monitored.

Diño also called out to parents not to fear other vaccination programs. Since the issue of dengvaxia started, more parents refused to take advantage of having other vaccines for their children.

(Not all vaccines are bad. There are other vaccines that need to be injected to your children, like the one for tuberculosis, measles, don’t be afraid of those vaccines.)

Still, Diño is in full support of the findings made by the PAO forensics team linking deaths to the dengvaxia vaccine, despite strong warnings from experts long-trained on the field. The experts said the ‘unsubstantiated claims’ caused parents to lose faith in other health programs.

“I appeal to media to help us convince the parents to have their children immunized with our traditional vaccines such as Measles, Mumps and Rubella (MMR), Diphtheria, Pertussis and Tetanus (DPT), Hepatitis B, pneumococcal conjugate vaccine (PCV), human papilloma virus (HPV) and other safe vaccines which have been proven very effective for decades in preventing possibly fatal illnesses in the future,” Duque said. – Rappler.com