Feb 6, 2018 1:38 PM PHT
Lian Buan
Facebook Twitter Copy URL
Copied
(5th UPDATE) The Supreme Court votes 10-5 after oral arguments in January, where petitioners tried to argue that the 1987 Constitution does not provide any legal basis for a re-extension 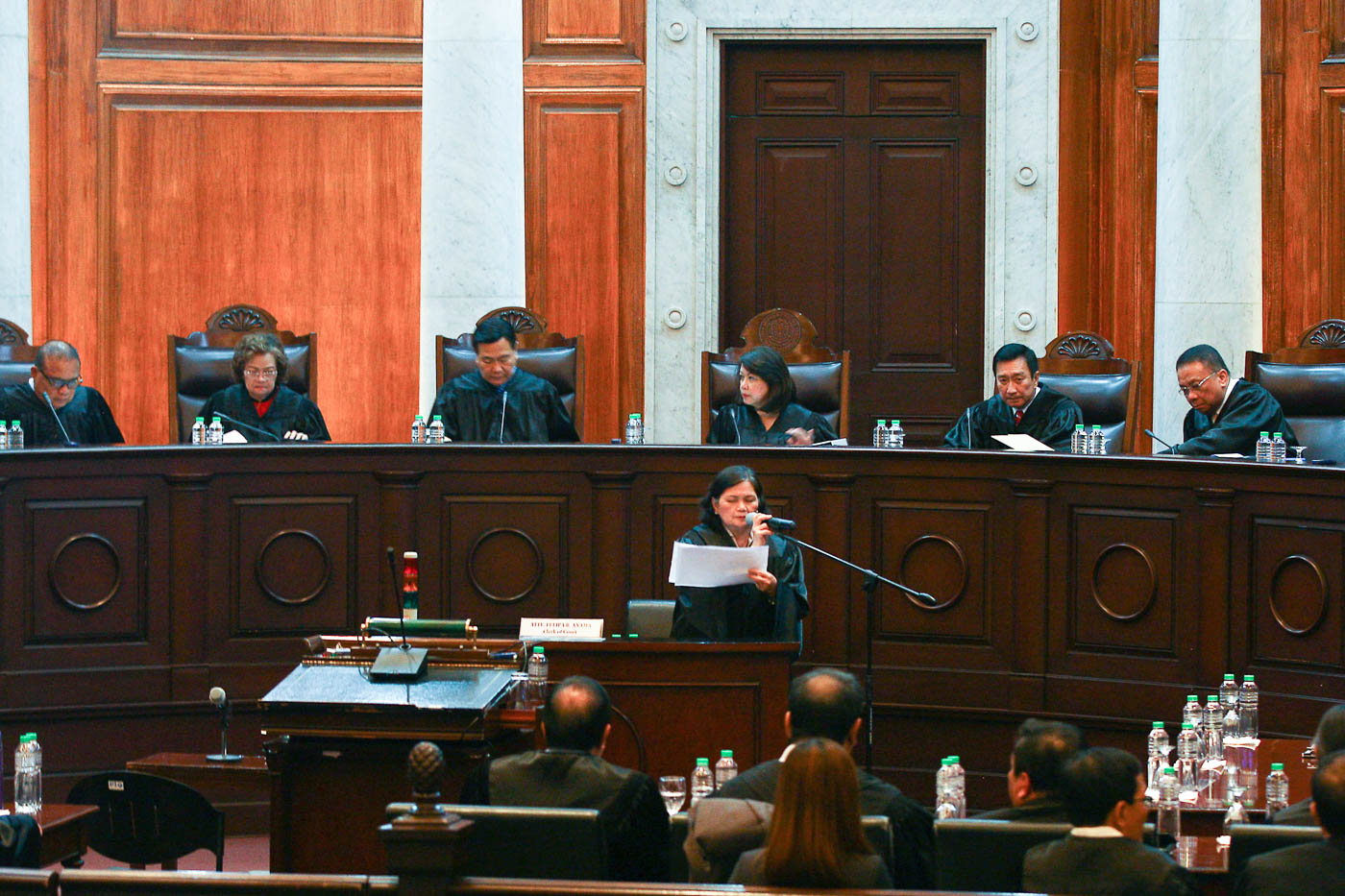 “The Court finds sufficient factual bases for the issuance of Resolution of Both Houses No. 4 and declares it as constitutional. Accordingly the consolidated petitions are hereby dismissed,” SC Spokesman Theodore Te said in a press conference on Tuesday, February 6.

The martial law re-extension was debated in oral arguments in January, where petitioners said that the 1987 Constitution does not provide any legal basis for a re-extension.

Solicitor General Jose Calida argued that the President enjoys discretion and that nothing – not the SC or even the Constitution – can stop him and Congress from further extending martial law.

The latest SC ruling sides with Calida in saying that the Constitution does not provide a limit to how many times martial law can be extended.

“The Constitution is silent on how many times Congress may extend a proclamation of martial law or the suspension of the privilege of the writ of habeas corpus. It also does not fix a period for the duration of any extension of a proclamation or suspension but expressly leaves the matter to Congress – ‘for a period to be determined by Congress,'” said a summary of the ruling provided by the SC on Tuesday.

The summary also said that the President and Congress had sufficient factual bases to extend Proclamation No. 216. One, the rebellion that spawned the Marawi crisis persists, and two, public safety requires the extension, as shown by facts presented by the Armed Forces of the Philippines.

On Wednesday, February 7, Presidential Spokesperson Harry Roque said, “The Supreme Court’s decision affirming the further extension of the proclamation of martial law and the suspension of the privilege of the writ of habeas corpus in Mindanao underscores the unity of the whole government in its bid to defeat terrorism and prevent the spread in other parts of the country of DIWW and other like-minded local and foreign terrorist groups.”

He also said that the majority of votes obtained in the ruling is “a manifestation of confidence on law enforcement agencies that they shall, like they had been doing before, continue to protect our people, secure Mindanao, and pursue the bigger task of rehabilitation while upholding the rule of law, Human Rights, and International Humanitarian Law.”

Christian Monsod, framer of the 1987 Constitution, was among the petitioners who argued that the charter does not allow a re-extension. His position lost.

During the oral arguments, SC Associate Justice Bersamin told Monsod that the framers did not anticipate present-day dangers, such that the power they gave to proclaim martial law became too limiting.

The new ruling also said: “If the Constitutional Commission had intended to limit any extension to 60 days, it would have been expressly stated and would not have been left to Congress.”

The House Makabayan bloc had feared that it would lead to martial law in perpetuity – something that Presidential Spokesperson Harry Roque said would never happen.

In December 2017, the SC voted to uphold the initial declaration with finality. That landmark ruling allows the President to put the entire Philippines under martial law. – Rappler.com