Feb 7, 2018 4:03 PM PHT
Rappler.com
Facebook Twitter Copy URL
Copied
The cancellation of the partnership comes about two weeks before we begin an online publishing contest organized by the NSPC and customized for the DepEd by Rappler 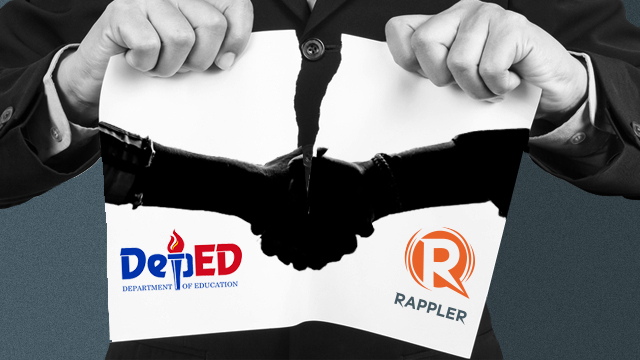 Barely a week after government propagandists published malicious reports questioning our partnership with the Department of Education (DepEd), the department on Wednesday, February 7, ended its 5-year engagement with Rappler.

Apparently acting on those reports, the department’s senior officials held an emergency meeting on Tuesday, February 6, to decide to terminate the DepEd’s agreements with Rappler that involve the training of students and teachers in journalism and disaster management, as well as the creation of online platforms for them.

This is more than a piece of paper.

The stories told by campus journalists we have trained over the years, the moments of triumph and defeat that showcased the best of Filipino sportsmanship in the provinces, the opportunity of young Filipinos working with fellow students and learning from each other, and their exposure to a world beyond their classrooms – that’s what this partnership has been about.

For 11-year-old Jasper Aspiras, who was selected to cover the Palarong Pambansa last year with our team, it was more than he could ever hope for. He said he learned how to write “compelling sports features” throughout the event, where he was made to practice what he learned in real time. Aspiras was among the more than 100 campus journalists who joined a 3-day workshop that we held days before the Philippines’ biggest grassroots sports event took place in 2017, as part of our partnership with the DepEd.

Unknown to many, we began working with the DepEd close to 6 years ago, during the 2012 Palarong Pambansa, when we provided full coverage of a sporting event that seldom grabs headlines, volunteered hands-on training for advisers and students, and built an online platform for them for their stories, photos, and videos. While this took resources and staff away from other Rappler projects, we pushed through with it every single year, because the DepEd and Rappler shared one common goal: to enable young Filipinos to be the best that they can be and to help provide them the skills they need to get there.

Yet, on Wednesday, without stating any reason, Education Secretary Leonor Briones gave us terse letters terminating two agreements: our partnership with them for disaster preparedness and the National Schools Press Conference (NSPC). 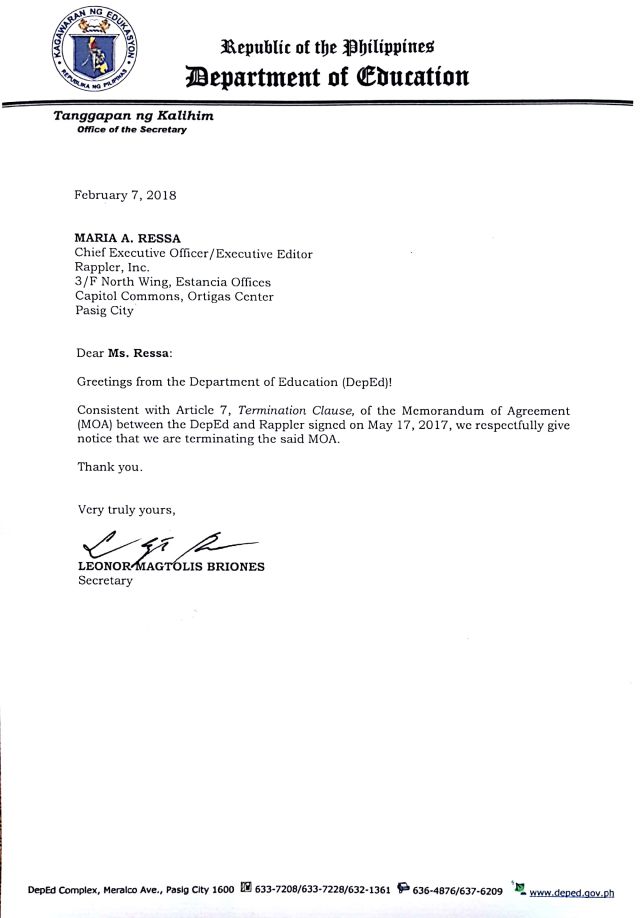 The cancellation of the partnership came two weeks before we begin an online publishing contest that is organized by the NSPC and customized for the DepEd by Rappler.

Why the department would make such a rushed decision that would jeopardize a project that took months of preparation on the part of the NSPC, the DepEd, and Rappler merely highlights the unstated reason for the DepEd’s action – that they are choosing to sacrifice the ideals of campus journalism to politics. (READ: Stand with Rappler, defend press freedom)

We regret Secretary Briones’ decision, but we are also inspired by what endures – our partnership with various student groups and schools nationwide.

We will continue to work with them as they tell their stories, learn new skills, and try to make sense of this tough, new world. – Rappler.com