HRW calls for end to ‘government abuses’ in indigenous communities 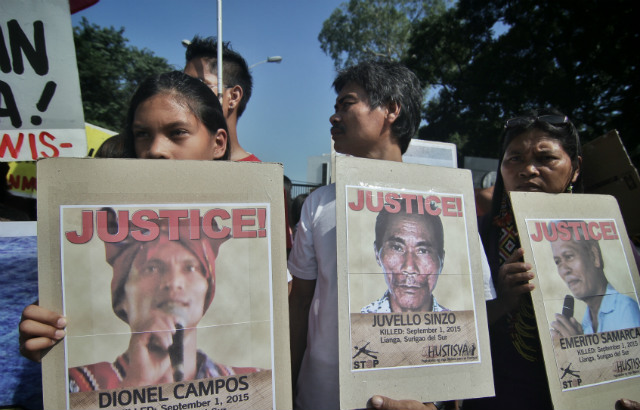 MANILA, Philippines – Human Rights Watch (HRW) called on the Philippine government to end rights violations in ancestral domains of indigenous peoples (IPs), adding that the situation in these areas “is not so simple.”

“Indigenous communities in the Philippines have long suffered not just from government neglect, but from government abuses,” HRW Asia Division’s Carlos Conde said in a statement on Wednesday, February 7.

President Rodrigo Duterte, on February 1, had said he would want ancestral domains in Mindanao to be opened to investors as a way to generate wealth. (READ: Rappler Talk: The love-hate relationship between Duterte and the Lumad)

Duterte also asked Lumad communities to “disassociate” themselves from the New People’s Army (NPA) and even hinted that the government’s counter-insurgency efforts are linked to his plan to relocate them to temporary shelters.

This plan, Conde warns, undermines the armed conflict between government forces and communists, displacement, and other longtime concerns of IPs. (READ: TIMELINE: Attacks on the Lumad of Mindanao)

“The brutality of the conflict in these communities is well-documented, with killings frequently carried out by poorly trained paramilitary groups and militias allied with state forces,” he said.

Instead of placing the fate of these communities in the hands of companies “who may have a track record of degrading the environment and driving out indigenous peoples,” Conde said the government must bring justice to victims of abuse. (READ: What the Lumad are fighting for)

“Government plans to improve the lives of the Lumad are unlikely to succeed so long as indigenous communities live in fear of violence, exploitation, and abuse,” he added.

The Commission on Human Rights (CHR) has also reminded the government that ancestral lands of IPs are “sacred” and any development plans must take into consideration their rights as recognized and protected under the Indigenous Peoples’ Rights Act.

Under this law, IPs have the right to own, develop, control, and use lands as well as natural resources. They cannot be relocated without their consent, among others. – Rappler.com