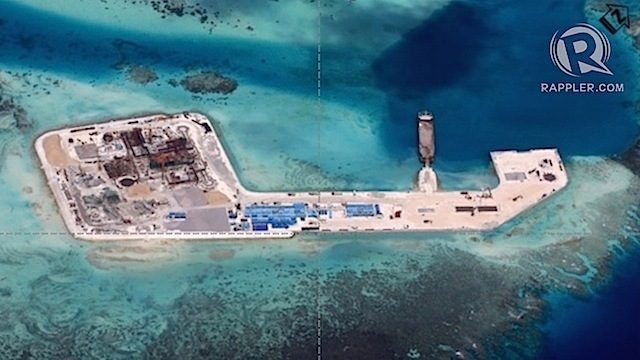 Facebook Twitter Copy URL
Copied
'Clearly, eventually, those artificial islands will be ours if we can ask China to leave,' says Presidential Spokesperson Harry Roque

MANILA, Philippines – While China’s island-building in the West Philippine Sea may be worrisome now, one day, the Philippines will “thank” China for them.

This was what Presidential Spokesperson Harry Roque said during an interview with Franco Mabanta, a supporter of President Rodrigo Duterte, on Wednesday, February 7.

“There will come a time when China’s might has ceased, when we will have to thank them for those islands,” he said.

While the artificial islands created by China through reclamation around coral reefs are now outfitted with assets like runways, control towers, and hangars, the reclamation has caused “irreversible” damage to the environment.

Under the Aquino administration, the Philippine government had said that 300 acres of coral reefs – more than twice the size of Rizal Park – have been destroyed due to China’s island-building activities in the West Philippine Sea.

The Department of Foreign Affairs back then had pegged economic losses from the damage at $100 million or P4.45 billion.

That is enough money, daily, to pay 9.62 million minimum wage earners in the Philippine capital.

In fact, environmental damage due to China’s island-building was one of the key findings of the landmark ruling by the Permanent Court of Arbitration which nullified China’s claim to the West Philippine Sea.

The international court had said that China’s large-scale land reclamation has “caused severe harm to the coral reef environment and violated its obligation to preserve and protect fragile ecosystems.” (READ: Malacañang on China buildup on PH reef: What do you want us to do?) – Rappler.com