Feb 10, 2018 11:13 PM PHT
Lian Buan
Facebook Twitter Copy URL
Copied
'We are preparing for this scenario. The first half of the year is very critical for us,' says opposition Senator Antonio Trillanes IV 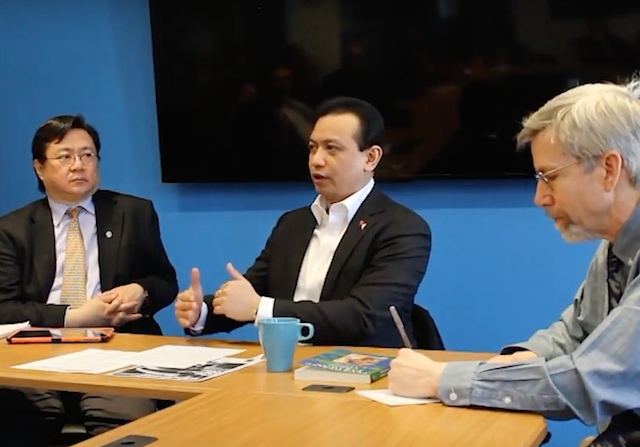 MANILA, Philippines – As President Rodrigo Duterte gets more “desperate” and “paranoid,” he is more likely to declare either nationwide martial or a revolutionary government (RevGov), one of his fiercest critics said.

Opposition Senator Antonio Trillanes IV painted the scenario in a roundtable forum organized by the Institute for Policy Studies in Washington DC on Thursday, February 8, when asked to give his thoughts on the “creeping dictatorship” in the Philippines, and the possible declaration of nationwide martial law or a RevGov.

“We are preparing for this scenario. The first half of the year is very critical for us because we feel that Duterte is getting more and more paranoid  and therefore more and more dangerous and more and more desperate. He may pull the trigger,” Trillanes said.

In November 2017, Duterte told the military that he had no intention to declare a RevGov. Days after, his supporters – including an official of the Department of the Interior and Local Government  – had rallied support for it

Trillanes said that being a former prosecutor, Duterte would not publicly admit or directly link himself to calls for a RevGov. The minute Duterte makes a direct order, or any government official for that matter, it becomes a justiciable issue that can be questioned before the Supreme Court.

The senator said declaring nationwide  martial law or a RevGov is the “ideal scenario” for Duterte.

“These options are still in play. Duterte wants it. That’s the ideal scenario for him. The question is whether he will pull the trigger or not and if so, when. I believe the primary consideration of Duterte is whether the armed forces would follow him. That’s his concern,” he said.

Trillanes said this is why the President has been busy wooing the military with salary hikes, equipment upgrades, and other gestures, “hoping this…would be reciprocated through blind loyalty of some sort.”

Trillanes was asked whether the Philippine military will heed any presidential declaration that would lead to authoritarian rule in the country. He is a retired navy officer who led a mutiny in 2003 to protest corruption in the military under the presidency of Gloria Macapagal-Arroyo.

The senator said that while a “majority of the rank and file” in the Armed Forces of the Philippines (AFP) support Duterte, they would come around if the top brass takes a different stand. (READ: Can Duterte declare a revolutionary gov’t? Here’s what you need to know)

“I believe right now because of the pressure from the different sectors like the Church, civil society, the business community, international organizations, they have person-to-person relations with the top brass of the AFP so they won’t [support it]. A great majority of the rank and file are for Duterte but they will still follow their commanders,” he said.

He added that military officers are “very socially and politically aware.”

“If the international community is expressive of this criticism against the Duterte administration, all of these things are accumulated in [their] subconscious,” Trillanes said.

“At the end of the day, they would do the right thing. If in their minds, their subconscious, following Duterte is not the right thing, they will not follow,” he added.

He said he experienced this himself during EDSA 2 which ousted then President Joseph Estrada who was very popular among soldiers because of his all-out war in Mindanao and the incentives he granted to the military.

The military leadership withdrew support for Estrada, who was then plagued by allegations of corruption. Trillanes said he liked Estrada but when his superior asked him if he would join the latter “on the other side,” he followed his superior without any hesitation.

Both military chief General Rey Leonardo Guerrero and Defense Secretary Delfin Lorenzana had said they would not support a RevGov. They gave this assurance to Vice President Leni Robredo in a security briefing ahead of the pro-RevGov rallies last year. – Rappler.com