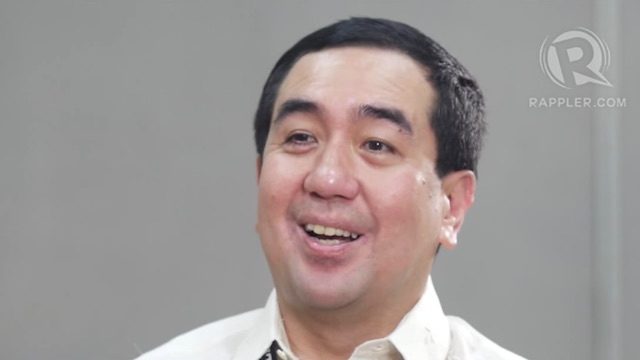 On Monday, February 12, it was the 3rd time Bautista skipped a Senate hearing. He was earlier issued a subpoena to attend Monday’s hearing, but to no avail.

Instead, Bautista submitted a letter addressed to Senate President Aquilino Pimentel III and Escudero, claiming he never received any previous invitation from the chamber.

“I understand from news reports that a subpoena has been issued because of my non-appearance in the hearing. In this regard, I respectfully ask that the subpoena be recalled since I never received the invitation,” Bautista said in his letter. 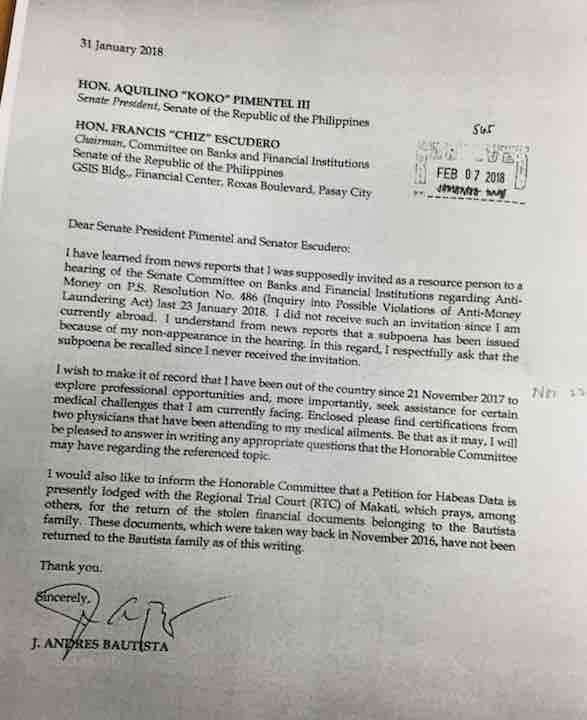 Bautista told the panel that he has been abroad since November 21 last year to explore career opportunities and seek medical assistance. He said he would be open to answer the committee’s questions in writing but did not give any forwarding address.

“I wish to make it of record that I have been out of the country since 21 November 2017 to explore professional opportunities and, more importantly, seek assistance for certain medical challenges that I am currently facing,” he said.

This did not sit well with Escudero, who said Bautista is clearly trying to evade the Senate probe. He said he would ask Pimentel to sign an arrest warrant against Bautista if and when the former Comelec chief arrives in the Philippines.

“The [committee] chairman considers his non-attendance as contemptuous. If he is indeed genuine in participating, he should have at least given us an address. That he did not give any is clearly an attempt to stifle the proceedings. It is contemptuous insofar as the chair is concerned,” Escudero said.

(Why would you send a letter without stating your address? And then you’ll ask us to send questions to you so you can respond via a letter? This is contradictory to his previous statement that he would face any allegation against him.)

“You were a former Comelec chair, a former chair of a constitutional commission, ni wala kaming mahanap na legal at pormal na address sa ‘yo, ‘di naman ata normal ‘yun (but we can’t find your legal and formal address, that’s not normal),” he added.

Escudero also questioned the accuracy of Bautista’s claim that he has been abroad since November 21 last year.

Citing records from the Bureau of Immigration (BI), Escudero said Bautista’s last departure from the Philippines was on October 21, 2017. His return was on November 1, 2017.

“I direct the committee to confirm this record. As claimed by Chairman Bautista, he left November 21 but no such record appears with the BI,” Escudero said.

Escudero earlier said that the panel repeatedly sent invitations to Bautista’s 3 different addresses but to no avail. He also said that the subpoena was duly served as it was received by Bautista’s household help.

Bautista, Escudero said, would not face an arrest warrant if he signs a bank secrecy waiver with his siblings Susan Bautista-Afan and Martin Bautista. The two are his co-depositors at the Luzon Development Bank.

Bautista earlier faced an impeachment complaint over allegations of his wife that he illegally amassed nearly P1 billion.

But before the complaint could prosper, Bautista resigned and was replaced by Sheriff Abas. – Rappler.com