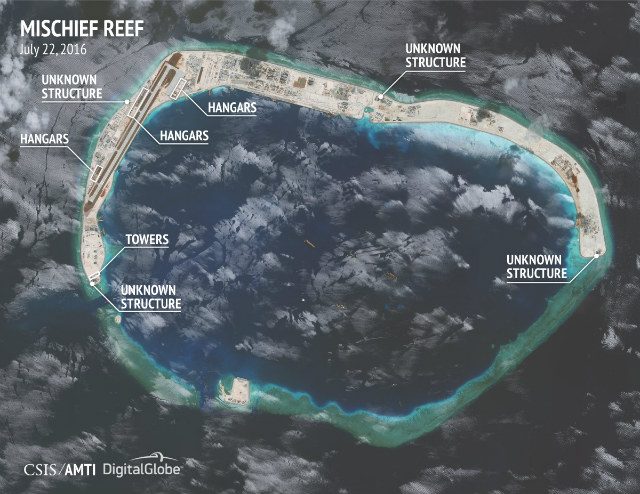 Facebook Twitter Copy URL
Copied
The Philippines and China say they 'had a frank, cordial exchange of views' on the West Philippine Sea, but stay silent on China's island building

MANILA, Philippines – The Philippines and China stayed silent on the Chinese artificial islands in the West Philippine Sea (South China Sea) after the two sides held a second meeting about the disputed waters on Tuesday, February 13.

In a joint press release issued past 6 pm on Tuesday, the Philippines and China said they “had a frank, cordial exchange of views on issues of concern on the South China Sea.”

“With the objective of maintaining and promoting peace and stability in the region, both sides discussed ways to manage and prevent incidents at sea, promote dialogue and cooperation on maritime issues, and enhance mutual trust and confidence. Both sides had a positive, fruitful, and productive meeting,” Manila and Beijing said.

The two sides issued this statement at the end of the second meeting of the bilateral consultation mechanism (BCM) on the South China Sea, held in Manila on Tuesday.

The meeting came a week after the Philippine Daily Inquirer published close-up aerial photos of China’s militarization of its artificial islands in the West Philippine Sea.

The joint press release of the Philippines and China, however, mostly reiterated previous statements issued about the sea dispute.

Read the joint press release below:

MANILA – The Philippines and China convened the Second Meeting of the Bilateral Consultation Mechanism on the South China Sea (BCM) on 13 February 2018 in Manila, Philippines. The delegations were led by DFA Undersecretary for Policy Enrique A. Manalo for the Philippines, and Vice Foreign Minister Kong Xuanyou for China.  Both sides highlighted the importance of the meeting as a consultation mechanism that would continue to contribute to the stable growth of bilateral relations.

Taking off from the discussions during the inaugural meeting of the BCM on 19 May 2017 in Guiyang, China, both sides had a frank, cordial exchange of views on issues of concern on the South China Sea. With the objective of maintaining and promoting peace and stability in the region, both sides discussed ways to manage and prevent incidents at seapromote dialogue and cooperation on maritime issues, and enhance mutual trust and confidence. Both sides had a positive, fruitful and productive meeting.

According to the Joint Statement of the Government of the Republic of the Philippines and the Government People’s Republic of China issued in November 2017, both sides reaffirmed that contentious maritime issues are not the sum total of the Philippines-China bilateral relationship. Both sides reaffirmed the importance of maintaining and promoting peace and stability, freedom of navigation in and overflight above the South China Sea, freedom of international commerce and other peaceful uses of the sea, addressing territorial and jurisdictional disputes by peaceful means, without resorting to the threat or use of force, through friendly consultations and negotiations by sovereign states directly concerned, in accordance with universally recognized principles of international law, including the Charter of the United Nations and the 1982 UNCLOS.

Both sides agreed to continue discussions on confidence-building measures to increase mutual trust and confidence and to exercise self-restraint in the conduct of activities in the South China Sea that would complicate or escalate disputes and affect peace and stability.

Both sides reiterated their commitment to the full and effective implementation of the 2002 Declaration on the Conduct of Parties in the South China Sea in its entirety, and to begin negotiations on a Code of Conduct on the South China Sea early next month, as agreed at the 20th ASEAN-China Summit on 13 November 2017 in Manila.

Both sides also had productive exchange of views on ways to strengthen cooperation in areas such as marine environmental protection, fisheries, marine scientific research, and oil and gas, without prejudice to their respective positions on sovereignty, sovereign rights, and jurisdiction. There were intensive discussions on mutually beneficial joint initiatives and consensus on the convening of technical working groups in the areas of fisheries, oil and gas, marine scientific research and marine environmental protection, and political security, in the framework of the BCM. The technical working groups identified a number of possible cooperative initiatives.

The third meeting of the BCM will be held in China in the second half of 2018 at a mutually convenient date.