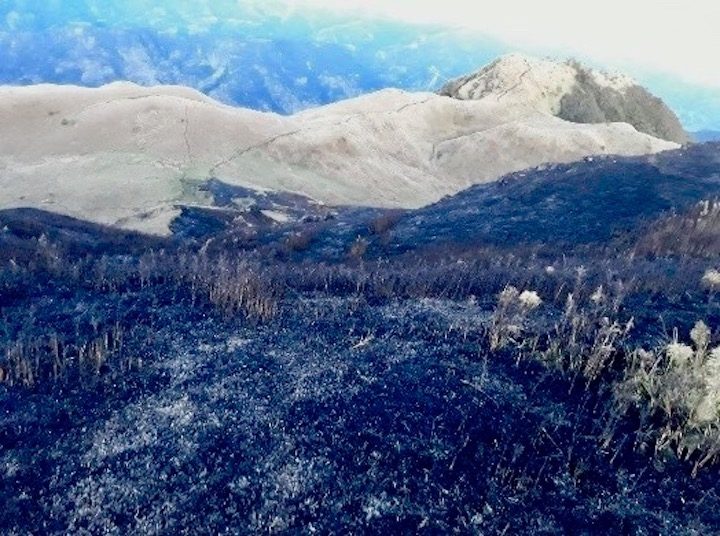 Facebook Twitter Copy URL
Copied
The hikers from Cebu will be charged for violating the Forest Code of the Philippines, says the DENR

BAGUIO CITY, Philippines – The 7 hikers who went up Mt Pulag last January 20 and caused a grass fire that damaged about 6 hectares of the protected national park may be in for taller legal battle to scale.

If found guilty, the hikers from Cebu City would likely serve 6 years in prison each and pay a total amount of P18.4 million for violating the Forest Code of the Philippines.

Ralph Pablo, chief of the Department of Environment and Natural Resources (DENR) Cordillera, said they submitted this week to the Benguet Prosecutor’s Office the amount of the damage caused by the fire, which started when the canister of the hikers’ stove exploded.

Rainier Laita, acting legal head of DENR Cordillera, said the estimated cost of the fire – which burnt 5.9 hectares – is P2.3 million. The Forest Code, however, says the person who started the fire and allowed it to spread shall pay 8 times the cost and be imprisoned for less than six years.

DENR Secretary Roy Cimatu said on Wednesday, February 14, the fire might have been set accidentally and that the wind helped spread the fire.

The top part of Mt Pulag, the highest mountain in Luzon, is above the timber line so no trees grow there, but it is carpeted with dwarf bamboo, unique to the place and on Mt Halcon in Oriental Mindoro.

Pablo said they closed the Akiki Trail, which was affected by the fire even as the other trails are fully reserved until April.

Mt Pulag National Park superintendent Teber Dionisio said that, left to Nature, the natural vegetation will return in 3 to 6 months.

The Protected Area Management Board and the municipal councils of the towns that straddle the mountain park discussed last Monday, February 12, the possible amendments to maintenance policies. The provinces of Benguet, Nueva Vizcaya, and Ifugao share part of the park. – Rappler.com