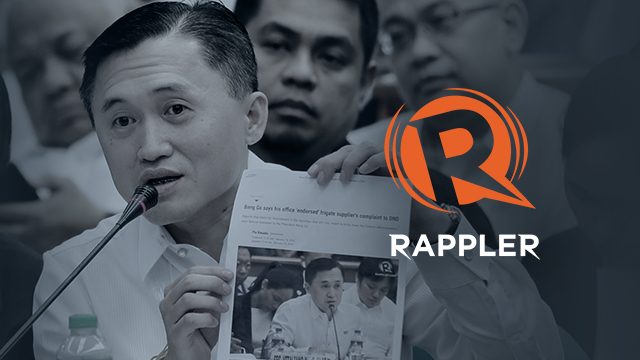 The investigative report is based on Frigates Acquisition Project (FAP) documents acquired by Rappler from sources privy to the issues that hounded the project in 2017. Go and his office were named in at least 3 documents exchanged between Malacañang, the Department of National Defense, and the Philippine Navy while the selection of the Combat Management System (CMS) was being debated.

The authenticity of the 3 documents was never challenged. They provided solid evidence to show Go’s intervention in the frigates deal.

Defense Secretary Delfin Lorenzana and Undersecretary Lloyd Christopher Lao, who worked in Go’s office, attested to the authenticity of the documents even as they both now say Go had nothing to do with their actions.

We sought out Go and Lorenzana and highlighted their denials in the report being questioned. We published these as part of our adherence to fairness and balance in our reporting.

Go claimed people might have used his name for their own gain, a sentiment we also included in the same report he questioned. We encourage the Special Assistant to the President to investigate this suspicion and expose who might have tried to use him to advance their interests in the multi-billion-peso frigates deal.

It bothers us how public officials resort to branding as “fake news” legitimate, verified, and vetted news stories when they refuse to explain or address unpleasant facts presented to them.

Is “fake news” the new defense of public officials against public scrutiny?

We assure our readers that Rappler continues to adhere to the highest standards of journalism. –Rappler.com